The Pleasures and Frustrations of Collaborative Fiction Writing 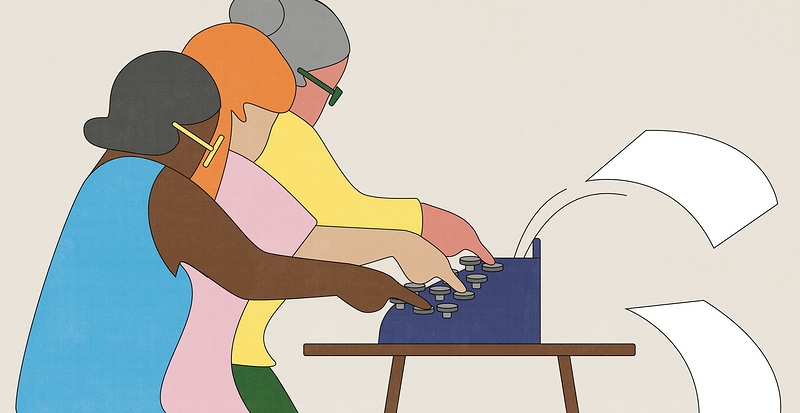 Writing a novel has traditionally been understood as a solitary and often grueling affair. Novels are frequently taken as the detailed expression of a single worldview or sensbility, even if this is distributed across multiple characters and plot points. In the New Yorker, fiction writer Ceridwen Dovey profiles three writing collectives that explode the traditonal view of the novel as an individualistic enterprise. These collectives (one working in romance fiction, another in erotic fiction, and the other in historical fiction) have each published multiple successful novels composed through elaborate collaborative writing methods. Together they demonstrate that writing doesn’t have to be the exclusive province of the solitary tortured “genius.” Check out an excerpt from the piece below.

The pleasures of collaborative fiction writing can seem so bountiful that one might begin to wonder why anybody would choose to do it alone. The varied methods of working as a group—a mixture of talking it out in person (what the Wu Ming collective calls “free-form improv”) and writing in solitude between meetings—give people with different creative temperaments equal chances to contribute. Many of the co-authors said that brainstorming with their collaborators was a safe space in which no idea was too ridiculous and no suggestion would be disregarded. In place of the loneliness and perpetual self-doubt of the solitary writer, they had camaraderie and encouragement from others.

Many of them described being spurred to write better after reading a co-author’s excellent scene. They all felt accountable for doing the work, turning up at meetings, not letting the others down. When the group gets writer’s block, they see it not as evidence of weakness and failure but as a sign that they’re on the wrong path as a group. They cultivate an attitude of “upward compromise,” accepting that they need to do something radical to get the creative juices flowing again—“make it crazier,” or delete everything, or use an “uncanny element, or a plot device that no one else would.”

Illustration by Ka Young Lee. Via the New Yorker.