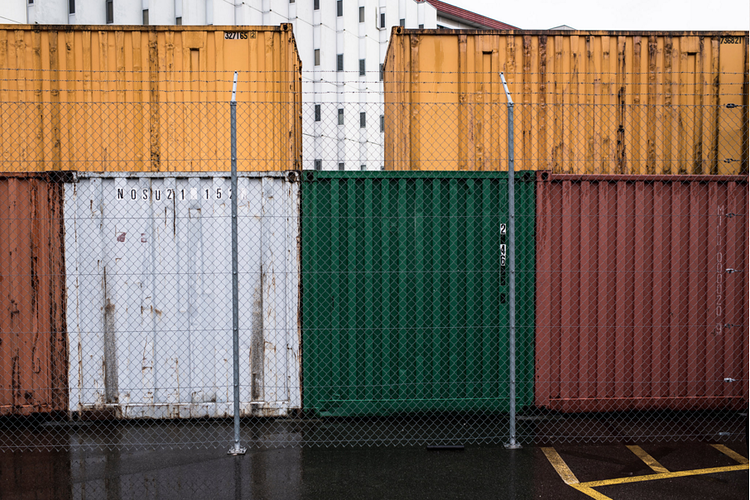 Graham Bowley and Doreen Carvajal write about freeports for the New York Times. We’ve republished in excerpt below, or the full version is available via New York Times here.

The drab free port zone near the Geneva city center, a compound of blocky gray and vanilla warehouses surrounded by train tracks, roads and a barbed-wire fence, looks like the kind of place where beauty goes to die. But within its walls, crated or sealed cheek by jowl in cramped storage vaults, are more than a million of some of the most exquisite artworks ever made.

Treasures from the glory days of ancient Rome. Museum-quality paintings by old masters. An estimated 1,000 works by Picasso.

As the price of art has skyrocketed, perhaps nothing illustrates the art-as-bullion approach to contemporary collecting habits more than the proliferation of warehouses like this one, where masterpieces are increasingly being tucked away by owners more interested in seeing them appreciate than hanging on walls.

With their controlled climates, confidential record keeping and enormous potential for tax savings, free ports have become the parking lot of choice for high-net-worth buyers looking to round out investment portfolios with art.

“For some collectors, art is being treated as a capital asset in their portfolio,” said Evan Beard, who advises clients on art and finance at U.S. Trust. “They are becoming more financially savvy, and free ports have become a pillar of all of this.”

The trend is prompting concerns about the use of these storage spaces for illegal activities. It is also causing worries within the art world about the effect such wholesale storage has on art itself. “Treating art as a commodity and just hiding it in storage is something that to me is not really moral,” said Eli Broad, a major contemporary art collector who last year opened his own Los Angeles museum.

Free ports originated in the 19th century for the temporary storage of goods like grain, tea and industrial goods. In the last few decades, however, a handful of them — including Geneva’s — have increasingly come to operate as storage lockers for the superrich. Located in tax-friendly countries and cities, free ports offer savings and security that collectors and dealers find almost irresistible. (Someone who buys a $50 million painting at auction in New York, for example, is staring at a $4.4 million sales tax bill. Ship it to a free port, and the bill disappears, at least until you decide to bring it back to New York.)

At least four major free ports in Switzerland specialize in storing art and other luxury goods like wine and jewelry, and there are four more — most newly minted — around the world: Singapore (2010); Monaco (2012); Luxembourg (2014); and Newark, Del., (2015).

Swiss Freeports Are Home for a Growing Treasury of Art

Business is thriving at Swiss freeports — those tax-free havens for valuables that are the closest thing to the Cayman Islands that the art world has to offer.

wow, and not print a correction ? simply edit out your acusation about editoral ethics, WOW! 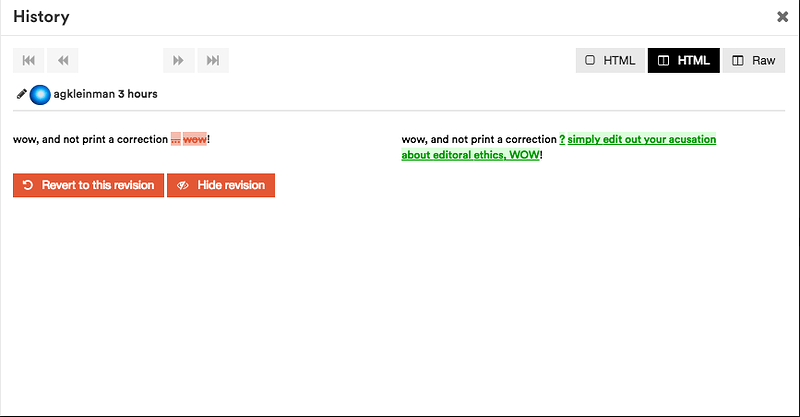 beyond craven, and still not publishing the full history… amazing 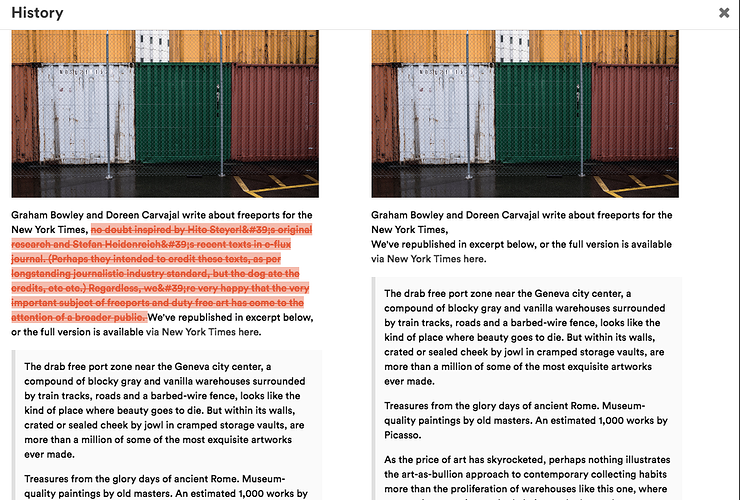 anyways… we all are simply aiming for the same goals.

Lol Adam, why would we “print” corrections on a web platform on which you can see the entire edit history of posts, which you so helpfully displayed?

It’s actually a very interesting question indeed Karen, especially considering the recent concerns raised by the NYTimes editing of the Brooklyn Bridge incident at OWS and now again with the that Bernie Sanders edit. Did you see the Nienman Labs piece on the role of Public Editors vis a vis on-line content: Mike Ananny: It’s time to reimagine the role of a public editor, starting at The...

"To hold future journalism accountable (not simply to describe its dynamics to interested readers), public editors must speak a new language of platform ethics that is part professional journalism, part technology design, all public values."

Maybe you’ve covered it already–and I’m sure thought about it with your archiving, which to me is necessary, but maybe not quite sufficient–but if you’re game, it might be worth having a continued discussion about? Could be productive…if only for dolts like myself.