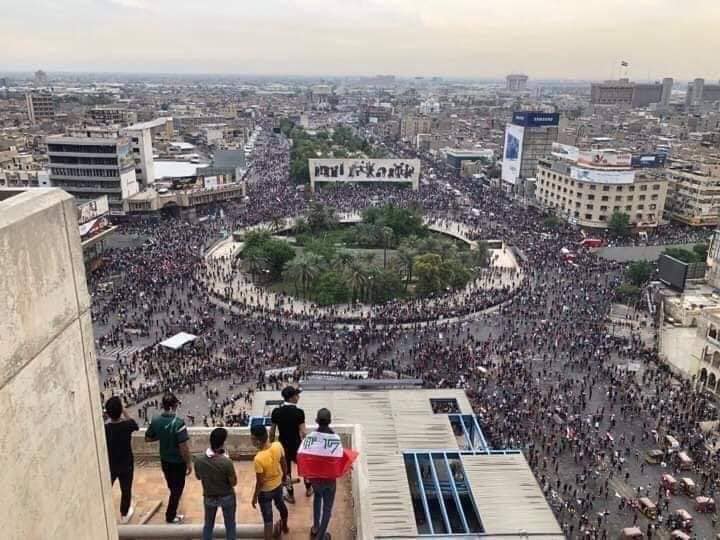 At the n+1 website, Rijin Sahakian writes about the inspiring civil protests that have rocked Iraq for two months. While Western media have reported that the main target of the protests is government corruption (when they’ve bother to report on the protests at all), Sahakian observes that many of the protesters, especially the younger ones, are denoucing Iraq’s oil-based economy and the destruction of its natural resources. As he writes, “The movement in Iraq represents the true kind of inclusive, nationwide climate change movement that Western campaigns ostensibly aspire to.” Here’s an excerpt from the piece:

Now, this generation is seizing the places it has been denied with inexhaustible resourcefulness. Brigades of protesters and their supporters have occupied city centers, but they have also taken to cooking, cleaning the streets, and making extensive civic repairs to long-neglected urban infrastructure. There are new murals everywhere, evoking Iraq’s deep history and chronicling events of the resistance. A newly minted publication, Tuk Tuk (named for the modest auto-rickshaws whose drivers have become celebrated first responders for the injured), reports on the revolution and its demands, alongside banners unfurled from rooftops, music videos edited in real time, and short films distributed online. These efforts continue, despite the onslaught of military-grade tear gas and live fire from security forces, who have killed nearly four hundred citizens in sixty days. But Iraq’s exploitation has been so total that fear no longer has any purchase with a generation that has nothing left to lose. There is no pretense of democracy to believe in; no shared wealth to seduce them into complacency; and almost no soil, air, or water left for them to survive.

Despite extreme public antagonism between the two countries, the US and Iran have de facto collaborated in and over Iraq for decades. Iraqis are now protesting against both.