"The key social unit of neoliberalism is the family in crisis" 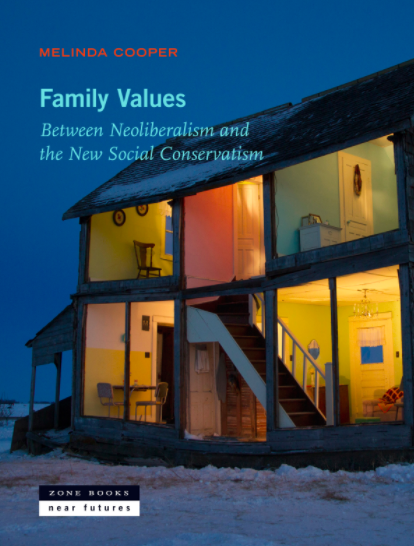 At the website of the journal boundary 2, Sarah Brouillette reviews Family Values: Between Neoliberalism and the New Social Conservatism by Melinda Cooper, published recently by Zone Books. As Brouillette writes, Cooper’s book “argues that the key social unit of neoliberalism is not the individual but the family, and not just any family but the family in perpetual crisis.” This is contrary to much conventional wisdom about neoliberalism which asserts that its ideal subject is the unfettered individual, free of any social bonds that might limit entrepreneurial mobility. Interestingly, Cooper suggests that even as the desire for marriage and coupledom has waned, its necessity has grown, since it is very difficult to afford a house or withstand our increasingly insecure society on one’s own. Check out an excerpt from Brouillette’s review below, of the full text here.

How did the family start to lose its normative power? For Cooper, conservatives skewering feminism, and more leftist thinkers trying to understand the foundations of neoliberalism, are in agreement about the force of 1960s and 1970s countercultural and antinormative critiques of the family. In Wolfgang Streeck’s analysis, the revolution in family law and intimate relationships – for example, the availability of no-fault divorce – destroyed the Fordist family wage because women were not stuck in the kitchen dependent on men any more. The family became a more flexible form because, in Cooper’s paraphrase of Streeck, feminists sought “an independent wage on a par with men,” eventually “transforming marriage from a long-term, noncontractual obligation into a contract that could be dissolved at will.” Cooper reads Eve Chiapello and Luc Boltanski’s argument as similar, in that they show how “the artistic left prepared the groundwork for the neoliberal assault on economic and social security by destroying its intimate foundations in the postwar family.” She quotes Nancy Fraser, also, who has written that “critique of the family wage … now supplies a good part of the romance that invests flexible capitalism with a higher meaning and moral point.” In each case, the idea is that feminism is somehow to blame for neoliberalization, because in seeking to free women from certain kinds of normative obligation and dependency they have demonized dependency in general, fetishizing independence from supports of any kind. Against these analyses, Cooper asks: what breakdown of the family, anyway? The apparent post-normativity of contemporary life is entirely compatible with the establishment of new norms. We continue to be form-determined after we no longer see social forms’ normative force. Put simply: the traditional family, which for Cooper is a family coerced into existence by exigency and normativity, is not broken enough.

The economy in depression no longer affords the state-supported Fordist wage, but the family is re-inscribed and reformulated even as it is queried and undermined by antinormative movements. If the foundations of neoliberal policy are thoroughly economic, neoconservativism enters Cooper’s account as a largely compatible reaction formation. The neoconservative agenda, formed deliberately against the liberation movements of the 1960s and their challenge to the normativity of the traditional family, served neoliberalization far more than the countercultural left’s challenges to social convention. Cooper argues that, whereas nostalgia for the Fordist wage became a “hallmark of the left,” neoconservatives, allied with thrifty neoliberals, preferred “the strategic reinvention of a much older, poor-law tradition of private family responsibility.” In a policy formation that reflected both neoliberal and neoconservative thought, social welfare was not to disappear, but instead to be made into “an immense federal apparatus for policing the private family responsibilities of the poor.”