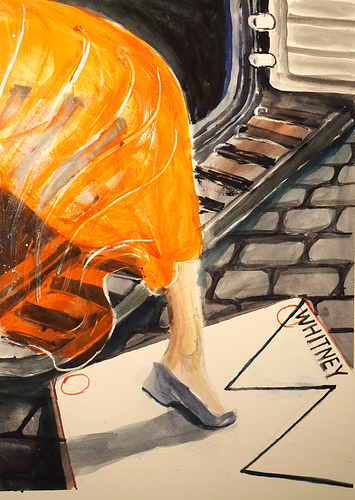 The sun was beginning to set through the Kushner City towers in Jersey City, scattering light onto the Hudson. It was Thursday, November 2, 2032: Election Day. The doors of the Tesla opened and Agnesia extended toward the street. For a moment, a symbol became visible on her alabaster skin: chains broken apart, with the links forming a logo that resembled a computer chip. The next moment her emergency-orange dress concealed the symbol as she set a Stuart Weitzman slipper inches above the cobblestones of the Meatpacking District and onto a platform. It glided toward the Whitney Museum entrance.

The Whitney had five separate doorways leading to separate experiences according to credit levels. As a leading collector, gallerist, and chair of the board, Agnesia entered through the founder’s gate. She took a deep breath, raised her resistance fist aloft, and was met by a glittering of image-flashes from inside. She had arrived at the headquarters of the Art Party, whose candidate was an artist in her stable.

Ever since Trump’s third victory and the Democrats’ subsequent implosion, the market was flooded with new political startups. Huge volumes of free-floating bitcoin, newly unmoored from the Democrats, drove social justice micro-movements to spawn separate parties, each newly equipped with white-shoe law firms, Ivy-League think tanks, and PR gurus. Silicon Valley rolled out AI leadership, attracting a massive global IPO. The Free College Party distributed Coursera tokens. The OneCity Party planned to turn high-rent enclaves into car-free paradises, connecting them all together with maglev trains. Meanwhile, the Art Party had managed to organize museums nationwide into a platform that harnessed the power of representation as never before. All competed for votes against the Winning Party of America, or WPA, as Trump had renamed the Republicans.

After Agnesia’s photo op had ended, a team of aids made their way through the crowd toward her, looking tense. Across the lobby a low rustling was heard and then a scuffle broke out as three giant augmented-reality banners popped up. One read “Stop Incarceration in the Name of Art!” Another read “E-Prisons = New Jim Crow.” Another read “Trustees: Not Your Art Party!” A roar of distant protest chants rose from somewhere outside. Within minutes a flock of security drones had short-circuited the banners and detained the activists. The advisors hurried Agnesia into the founder’s elevator, which sped straight up the luxury apartment tower that loomed high over the Whitney Museum.

“Just bitter former art students,” said an advisor to Agnesia. “They clearly don’t understand what you have done for the field and they don’t have the overview to understand that e-prisons are a progressive cause. Just ignore it.”

“And did I mention that I love your delicious orange ensemble?” remarked another advisor.

“You know Rodney, I wasn’t sure if it might be too much,” responded Agnesia. “I certainly didn’t want to upstage our candidate tonight, but do you know what is absolutely exquisite? The fabric is originally from the uniforms of Guantanamo detainee; they wore it on their final hunger strike. Of course, I wanted nothing to do with the dress at first—how could a person like me begin to understand the injustices suffered by the detainees? But my designer, who I’m head-over-heels in love with, insisted—insisted that I think big. He said that I should embody the struggle as we launch our party tonight. And I believe he was right”

“That is truly powerful, Aggie,” replied one of the advisors. “And I must say, incredibly brave.”

The elevator door opened and one of the advisors exclaimed, “There’s our view!”

The founder’s skybox was more than a mile above the ground. Here the Art Party candidate was about to stage a VIP performance to mark the final hours of voting. It would be streamed in Holographic Reality to crowds gathered in museums and art centers from Miami to Boston, San Diego to Anchorage, all packed with the kind of people who could send an image hyper-viral. This had already happened twice over the summer, generating incredible buzz for the Art Party and bumping the sale of Puerto Rico to the Oberoi Group off the front page. By November, the Art Party was second only to the Winning Party of America in the polls. This was the first election of a completely new political style.

The shift could be attributed not only to the unraveling of the Democrats. Trump’s heart attack and coma in 2027 had marked the rise of Ivanka and her wordless yet effective political strategy.

In the aftermath of Trump’s heart attack on live TV, a power struggle ensued that saw Stephen Miller consolidate support. But then Steven Bannon briefly reemerged as white militia general-commander, garnering the support of the military and setting up checkpoints on roads nationwide. He was promptly was hung upside down and the generals fell with him. All the while, Ivanka gradually magnetized attention as the press reported daily on her outfits. There was the black dress and the billion followers. There was the white scrub wrap that signaled the end of Obamacare. Then the micro-beaded Hermès Tabriz, right before the killer drone swarm was unleashed on Iran. Soon, color combinations consumed the national discourse, drowning out the criminalization of unions. Before too long, Ivanka, with the Miller wing behind her, was shaping national and foreign policy through pure aesthetics. Political strategists scratched their heads. Only the Art Party knew how to play this game.

Up in the skybox, VIPs settled into their seats. The candidate stood alone in front of a giant e-canvas holding a brush and a palette. Three assistants wheeled a medical cart onto the stage and extended a number of tubes and wires from the equipment, inserting needles and connecting sensors to the candidate’s forehead, neck, and chest.

A giant light-graph appeared beside the stage, with readouts from the sensors connected to the candidate. First the vitals: body temperature, pulse rate, respiration rate, blood pressure. Now the mapping of the DNA, which grew out of the floor like a shimmering tree. The bark consisted of forensically reconstructed images of the candidate’s ancestors. Soon millions of faces blinked in a visual crackle. They were noble, smiling faces of every skin tone.

Now the faces dimmed and a network of glowing icons appeared along some of the branches of the tree: there were broken scales, police badges, shackles, and ships. On another branch there were icons of bullets, germs, and erasers. On another, burning books and smokestacks.

“This is brilliant, Aggie,” whispered a Chase executive. “Whenever I see your candidate’s work, I wonder to myself, why does one person get to have so much fabulous grievance? It’s just not fair.”

“And its all 100 percent verifiable!” whispered Agnesia. “Lots of the DNA was legally implanted of course. Don’t tell a soul, but I was the secret buyer at Sotheby’s Exquisite Origins Spring Event, where we found some absolute rarities. We have secured exclusive rights and of course the genetic donors are under gag orders. And I should add, they were rather well compensated.”

“I seem to remember that auction setting records, am I right?” asked the executive.

“You have a lovely memory,” said Agnesia. “And here comes my favorite part…”

A surge of light moved through the network of icons in the 3-D diagram, from the trunk up through the branches. And when it reached the branch tips, the white light froze into a rich range of glowing hues. With a hand gesture, the candidate downloaded all the colors into the palette. The tree disappeared and the candidate applied brush to palette.

At that moment, people all across the nation were logging into their Ultras to cast emotion-votes for president. If art could have a political effect, this was the time to find out, when the Art Party candidate was officially on the ballot. The entire skybox held its breath as the candidate began to paint.

Part 2 will be published here on Friday, November 2.

Image by the author.