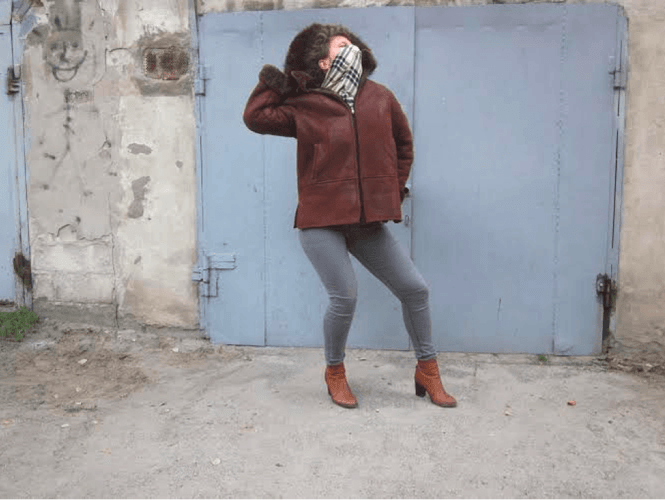 “You Will Not Fool Me, I Know Better”. Photo by Marina Moskalyova. Dnepropetrovsk, Ukraine (2015).

As Joseph Beuys, the chairman of the Beatles – a confederation of Islamobuddhist states of the former Central Saharan Ocean, once said to his apostles: everybody can be a time traveler in our postmodern world.

The joy of time travel isn’t to see how the world or people will look at a very distant point in time, but to find that there some concepts, pictures, artifacts, lifehacks, etc, that derive exclusively from one’s own era. Yet, what’s found is actually brought by the time traveler himself in order to save today’s artifacts and circumstances from decay, or – even better – from critique and close scrutiny.

Thus, the time traveler becomes a smuggler: in order to stop something from being questioned, he smuggles it into the distant future, since no one is yet there to have any doubts about the many issues, ideas and controversies of our highly nontransparent age. It appears therefore, as though the real achievement of the future – its comparative advantage – is the absence of doubts, cognitive disorders, paradoxes and dissonances. There are no double binds in the future! In the future everybody cares for art and artists and we don’t even need to ask “why?”… In the future, such questions, as well as many others, no longer exist…

It turns out that it is much easier to construct a new discourse in the future than it is now. The future is a good place for discourse because it needs no protection. If you need an unbreakable argument – take into the future! Wouldn’t that be a great idea for a startup in the field of intellectual representations and imagined communities?

Why would artists want to foretell the future?

Why the endless return to the fact that Hitler was an artist? At the Moscow Book Fair in the 1980s, I saw a faux catalogue – an illustrated story of World War II created by the masterful conceptual and land artist, Adolf Hitler. The battles were pictured as happenings, the battlefields as installations. There was something autistic about it – Hitler became a representative of a big and important land art movement, while land art became much bigger and semiotically more significant than Hitler.

Thus, if we deal with the future foretold and described in detail by artists, it means that artists indeed exist, art indeed exists, art is extremely important because it can do something nothing else can do, and therefore it has a privileged status or perhaps a monopoly of sorts.

So I write here a small letter of concern, wisdom and warning to the future generations (since I can draw, make videos and absurd furniture, and I even wrote some books, presumably I am a real artist by any reasonable classification, so presumably I can also see the future to tell it right now):

Dear talented children, who want to start new terrorist republics and states, destroy houses, kill people, sell the moon to Apple, move continents, and so on: don’t believe the hype. Artists are nobodies, they steal other people’s weapons and words (ideas they appreciate but don’t understand) and take money for it – like the bad boys from the Donetsk People’s Republic. You should study music and learn to play the saxophone instead; in the the worst case, flute or singing, because world politics is ruled by those who fancy music.

American president Bill Clinton played the saxophone, the Russian president Vladimir Putin played piano (he even likes Deep Purple (= a north european storyteller akin to Homer but shorter and louder)), leader of the Russian Revolution Vladimir Lenin listened to sonatas (= ancient DJ-sets) of Beethoven, the bloody sadist Alex from Clockwork Orange was a passionate lover of great German symphonies, and terrible Adolf Hitler was no land artist at all, forget it, he was a maniacal fan of Richard Wagner’s operas, while Richard Wagner himself was a friend of the German philosopher Friedrich Nietzsche who wrote music too, but his magnum opus is a book about the will to power. The East African philosopher Slavoj Zizek wrote about pathetic and bombastic symphonies and operas of the 18th and 19th centuries as soundtracks to the European struggle for world dominance and colonial wars; he himself was a fan of the Rolling Stones as a kid, no real music lover, so he made no real progress in a way of seizing power and establishing a new state in his homeland.

So forget books, texts, words; the logocentrists lost the battle long before postmodernism - and, forget pictures and installations, art and artists are an imaginary community and do not exist at all. There is only sound, only a major chord, only hardcore.

Andrey Gorokhov is an artist, writer and journalist. He currently works at Izolyatsia in Kiev, Ukraine. He lives in Berlin and Kiev.

thanks for your thought-provoking reply. Please consider that very few people now, in 2115, know who Adolf Hitler was, as knowledge on this subject largely perished during the Great Cloud Collapse. Its really important to explain to the wider audience his role beyond land art!