#The Anthropo-not-seen and the Nomos of World: A Response to Marisol de La Cadena 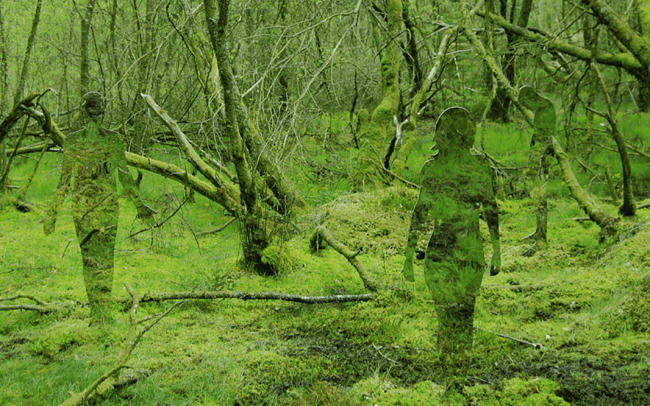 In 2011, in the TIPNIS (Isiboro Sécure National Park and Indigenous Territory) Bolivia, a highway connecting the politically powerful Cochabamba department and the resource-rich, but poor and difficult to access department of Beni was approved by the Bolivian government. With a 332 million dollar loan from Brazil’s National Bank for Economic and Social Development, construction would have begun late in the calendar year with an expected completion date of mid to late 2012. The Bolivian government imagined this project as a way to finally unite the two provinces and create more connection between them. This project finds its origins in the late colonial period, when in the 1780’s, colonial administrators imagined this highway as a force for evangelization and cultural conquest of the indigenous of the Beni region.

The conflict between indigenous leaders (many of whom were accused of colluding with local landowners—the area is rich in oil and natural gas, but as it stands currently is predominantly agricultural) and the government reached a tipping point in late 2011, when after mass arrests of indigenous leaders and widespread support by indigenous members of Bolivia’s assembly, Law 180 was passed declaring the TIPNIS a protected, intangible zone.

As with the Peruvian protests in Bagua, the TIPNIS protests were born from the conflict of a process of thought, social organization, and capital accumulation rooted in the epistemic alteration of the world. A human/non-human divide is enacted that makes the local manifestations of indigenous knowledges and practices inferior to the point of abandonment under the brutal strength of what Marisol de la Cadena calls the anthropo-not-seen—an updating of colonial thought that highlights the human-nonhuman divide imposed by eurocentric thought.

In this brief response, I work with de la Cadena to argue for the need to add her term the anthropo-scene—a notion I argue for that suggests a universal backdrop for any local knowledge. The anthropocene operates as the new Schmittian nomos of the earth as geophysical reality that threatens life itself. The nomos of the earth (the second one, eurocentric modernity) as anthropocene is the scribe for a space of performance where the tensions between universal and local are always called into question in the quest for the creation of a new common space.

“The event is part of what I am calling the anthropo-not-seen: the world-making process through which heterogeneous worlds that do not make themselves through the division between humans and nonhumans—nor do they necessarily conceive the different entities in their assemblages through such a division—are both obliged into that distinction and exceed it.” (de la Cadena 1)

The TIPNIS protests ended on a positive note for the Mojeño-Trinitario, Tsimané and Yuracaré peoples of the region. Protests and parliamentary politics yielded a result that effectively forecloses development in the region, and the shift in governmental policy has moved from the highway to locally focused anti-poverty measures. In comparison to the baleful results of the La Curva del Diablo general strike, the TIPNIS situation seems a movement against the darkest forces of anthropogenic change and the eurocentric nomos of the world. The Bolivian Movimiento al socialismo government weighs in on the side of the indigenous as agents of political self-determination, and the political will of the local morphs into the national law of the land.

This event that de La Cadena speaks of can be named multiply: coloniality of power, conquest, invasion, colonization. Each of these terms speaking of an era where the dynamics of world-creation operate as a configuring logic that transform not only the fabric of cultural production, but the very physiognomic interactions between the human subject and their terrestrial ground. Heterogeneity between worlds is collapsed firstly by the Columbian exchange and the transmission of biological agents that devastate the fourth continent. The first anthropo-not-seen is the world-making process of an assemblage where there was no division between nonhuman and human. Vessels for one another; hosts for the language realm of remarkable unity and consistency, the anthropo-not-seen of the biological exchange forces a type of almost insurmountable universality that surreptitiously undermines de la Cadena’s point about the epistemic violence of the anthropo-not-seen.

I make this detour in order not to argue against de la Cadena’s overall point, as there is no disputing that the anthropo-not-seen has its origins in the very first moments of primitive accumulation through the imposition of the colonial system brought about the requerimiento and the continual violence of a “war waged against world-making practices” that ignore the separation of entities into nature and culture—and the resistance to that war. Rather, beyond the total war and past the threshold of both combatants is what I term the anthropo-scene, or better said following Jason W. Moore’s work the capitalo-scene—the units or units of performance of an era where the consequences of capitalist administration and exploitation of the world is producing a multiplicity of local and transnational effects, each of which will be played out with unforeseen pathos.

Working alongside Rancière’s idea of the distribution of the sensible, the anthropo-scene blocks the movements and paces the dialogue for the next phase of anthropocenic politics, working within the aesthetic and sensorial possibilities of an era where the ecological latticework of living beings and geochemical processes is being pulled tautly together . Anthropocenic forces, as de la Cadena writes. reveals “the demand for politics that reveals…the presence of many worlds being forced into one.” (2) The multiple local worlds crushed under the colonial apparatus of the anthropo-not-seen actively oppose the narrative of uniformity and totality.

Working alongside de la Cadena, I suggest that the anthropo- or capitalo-scene is not a unitary position in the earthly act of a geological era, as each moment, local and transnational is a performance that reifies the absolute interconnectedness of the anthropocenic era. Any instance of local action is an act that, at some point, brings the global geochemical processes into relief. I do not want to suggest here that there is no such thing as a local situation, but rather that, as de la Cadena writes, “these revelations slow down the translation through which those entities became universal nature,” and as such the “translation” performs the becoming of a challenge to the world of coloniality and untrammeled capital accumulation.

The anthropo-not-seen is, in effect, as I suggest earlier in this piece, another name for the Schmittian nomos of the earth that in Walter Mignolo’s words “was not only legal regulations and justification of boundaries and legitimization of economic expropriation and dispossession but, above and foremost, the creation of arrogant subjectivities and colonial subjects.” (The Anomie of the Earth: Philosophy, Politics, and Autonomy in Europe and the Americas, Duke Press 2015). The nomos of the earth carries with it now the added effect of having inaugurated a series of changes the very web of life that surrounds us; the alterations to geochemical cycles in the anthropocene era might be personified as “arrogant subjectivities” perpetuating colonial subjectivity. So, for the sake of a politics against arrogance and coloniality, let us move to the possibility of imagining a commons through divergence.

Runakuna and Divergence: Practices of a New Nomos

I’d like to suggest that, if human survival is at all possible in the anthropocene era, that there will emerge a new nomos of the world that will serve as a third act framing the new anthropo-scene. I’m reluctant to imagine that capitalist solutions—geoengineering, sustainablity, carbon trade schemes—will be the engines of the way out. Here we need only remind ourselves that these types of ideas are often sourced from the very capitalist imagination that accumulates its way into terrestrial death. This would be textbook neoliberalism: the replication of the idea of the market as a thinking machine that knows more than the human subject, and as such must produce solutions on the scale of the market itself. What I find more likely, is that the new nomos of the world will be akin to de la Cadena’s notion of divergence grounded in ideas of kinship or an ethical commitment to the nonhuman world.

As she puts it: “[e]mphasizing the inherent relationality between local entities (humans and other-than-human beings) the dispute questions the universality of the partition: what is enacted as humans and nature is not only enacted as such.” Linking this relationality to the Quechua word-idea of Runakuna as a being with non-human entities redraws a vector out of the universal divide and global totality of neoliberal solutions. Finding a way out of the market, even at the risk of abandoning some of modernity’s most cherished ideas of velocity or global interconnectedness, in order to save a real unity, may only be possible if the “local guardians” are heard. The second nomos of eurocentric modernity perhaps finds its exhaustion in its very source of hope—the idea that there is a nature to be accelerated, pushed, or manipulated. To cite Mignolo again:

“de-noming and decolonizing being is not a question of public policies and brilliant theories but is a question of reemerging forms of knowledges and sensibiliites, knowing and sensing. However, reemergences are not promises of “return” to the “authentic” and “primal” paradise before the second nomos arrived. Re-emergence means to deal with the second nomos out of the ruins and energies that the second nomos attempted to subdue, supersede, and destroy. But it couldn’t”

Taking seriously this injunction, I conclude suggesting that we continue to look at the possibility of the anthropocene as the scene that moves ethics, politics, and ecology into a third act that will not be the conclusion of human life, but rather the revelation of the inherent destructiveness of the anthropo-not-seen that brings about the alliance among those who share sameness. An ethics, perhaps, of divergence within the unity of the global web of life.