Superconversations Day 47: Manuel Vargas responds to Jonas Staal, "Empire and its Double: The Many Pavilions of the Islamic State"

SUPERCONVERSATIONS DAY 47: MANUEL VARGAS RESPONDS TO JONAS STAAL, “EMPIRE AND ITS DOUBLE: THE MANY PAVILIONS OF THE ISLAMIC STATE” 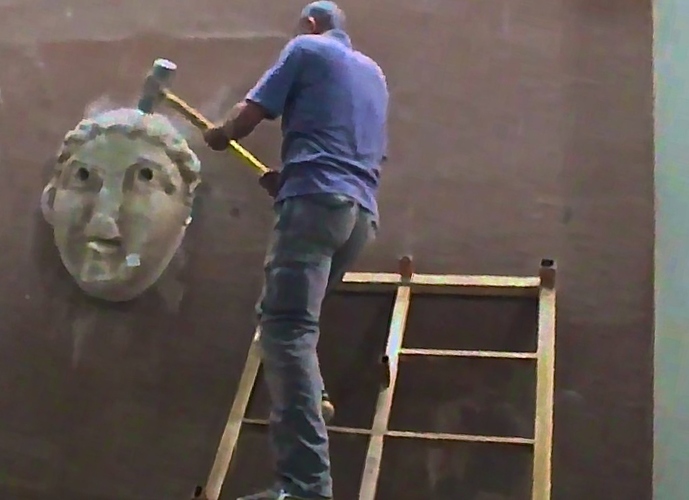 February 2015, Isis militants destroy artifacts in a museum in Mosul, Iraq. (from ABC).

The ideological appropriation and fetishization of the symbols from the West, especially those consumed by mainstream currents, and produced by the so called Ideological State Apparatus—e.g. the big Hollywood blockbusters á la Scarface and Goodfellas—is nothing new. The documentary The Art of Killing (Joshua Oppenheimer, 2012) shows how these symbols ground our collective minds, and how pulp fiction figures can serve as models for the recreation of the most barbaric acts against one’s adversary, without leaving a small trace of moral injunction. This impulse and seduction towards becoming one of these fictitious characters, the representation of what the West owns as ‘pure entertainment’, have their sad negation as the fulfilled desire of those who reproduce them as methods of torture.

A similar destiny appears to be inflicting the collective phenomena that has come to be known as Anonymous. Once praised as the vanguard of web activism, always fighting on the right side of history with full devotion, is now ironically being caught somewhere in the process of a Hegelian triad, getting replicated out of its original purpose, but using the same tactics to give rise to a completely independent and disjointed action. Its spirit is being used as the twisted mirror at the disposal of organizations that are far from even the classic terrorists or fundamentalist. One more time history is given a tragic turn in the form of an implosion. The tools so beloved by progressive radicals which were created for a specific function by the West turn themselves against their masters while being appropriated by the wrong and unexpected players. An attached unknown desire into the original idea makes its apparition through the practices embodied by the Islamic State, which now appears sadly as the vanguard of parapolitics. That’s the current state of affairs.

“The joke is on us when confronted with those whose destructions are celebrated as ‘progress’ – stretching from Marinetti’s embrace of a poetic fascism to the US occupying forces that settled its military forces on a cradle of human history – versus those whose destruction is denounced as ‘medieval terror.’”

“…the Islamic State’s pavilion wages its wars in proxy throughout the Internet: displaying its monochrome-black on the websites of states, national TV channels, and even on the front pages of online journals invested in art and theory.”

If the XXI century has shown us anything, it is that it has been a very fractured one. The same can be also said about the Islamic State, which is composed by independent hubs, each one an ensemble manifested through a virtual platform and without any objective but the spread of acts of extreme violence, and a message of hate at its most elementary level. It is the materialization of the death drive taken to its most obscene rationality or lack thereof.

While fighting the representation of the object (idols), they themselves become the grotesque representation of the idolic object themselves. Having wanted to destroy any resemblance of what they are against, they show themselves as the ultimate example of the object in their destructive hands. The only point they might be proving therefore is that subjectivity has ceased to exist so that, basically, we can easily conclude that they are condemning themselves.

When the life of the other doesn’t have any meaning and you feel that it is your duty to annihilate it, you are reflecting your own inner desire towards that path, you are exposing your loss of the most elementary concept of common decency. Isis knowingly or not is dehumanizing itself in this process.

“Destroy all heritages! Destroy the past!” How this imperative has served art since Malevich presented his Black Square as a renunciation of all previous preconceptions of what art should be. But this violence is being ripped from its foundation, and now the tools used through the internet for communication and entertainment—to become something even more abstract, the destruction being itself the only purpose being served for its own sake. The emergence of this ‘new’ is only a fulfilled reflection of what the West lacks but still desires: fearless empowerment and passion towards action in the form of a Black Square and powerful ammo used toward the other. The world order for them doesn’t mean anything no more; the nation-state as we know possesses any meaning for them. Why? Because an idea is the inception of the object and they go against what is already objectified, but what they lack is the idea itself because an idea needs an open space to flourish, where art and society meets. Their vandalizing acts serves as a representation of what the West has imagined as the end times. All being portrayed constantly in our media, and winning our hearts towards fear—it’s most useful, but extremely banal medium.

And yet they have the skills without a culture, without a heritage, with a brute force imposed towards the other, and they are ready to use it without mercy or any kind of filter. But it lacks coherence, it lacks meaning and representation and what they don’t know is that the scenes that are being created are just a portrait of a horror show… Of something distant that is impossible to relate and at the same time doomed to fail because, how this world can sustain itself? What goal will it serve, the lives of the people within its boundaries when they have been stripped of any sense of autonomy and will? With any remote possibility of expressing the I? Because with ISIS the I is what has ceased to exist. We, who opposed them, should be able to distance ourselves from their message, to restrict our awareness to factual data and ignore, it is the only figure we have left towards them: Oblivion. And if the future is in the form of horrific images, then lets close our eyes towards it and forget about it, and build a present worth fighting for.

But the West will go on, new saviors of the loss are emerging, even going further with this butchery, recovering—with the help of 3D printers—what is no longer there, as the work of Morehshin Allahyari titled Material Speculation: ISIS and all its unapologetically pastiche, and embedded nostalgia that surrounds it in the form of a diluted repetition that ends up looking as an edible gummy. For the sake of Art, we, for sure, can still feel safe at home.

Until this point this essay was originally written in Spanish. The text can be seen below until it stops, and the author starts writing in English.

“…the Islamic State’s pavilion wages its wars in proxy throughout the internet: displaying its monochrome-black on the websites of states, national TV channels, and even on the front pages of online journals invested in art and theory.”

Manuel Vargas Ricalde is a translator with an M.A. in Media and Communications at European Graduate School. He recently published his first book Theory at the End Times: A New Field for Struggle in the Rise of the Age of Imperative Demands. Atropos Press: New York / Dresden. (2014) Vargas is also a Member of The New Centre.

Yes, except the Islamic State is much more than ‘independent hubs manifested through virtual platforms w/out objectives’ - but extremely organized, on-the-ground networks with substantial partners and funding administering and governing major parts of Iraq (and Syria), including its second largest city and strategic oil region. This requires high levels of sophistication, training, and collaboration, helping to fuel greater arms deals, warfare, and destabilization, which are specific - and shared (not just amongst ISIS hubs) - objectives. Though the “horror show” is very real, and virtual platforms/social media have been highly effective in creating widespread consumption of this horror, they are also a distraction from these political and profit making objectives as well as the funding, forces, and effects of and behind them. We can close our eyes to the show, but should look unflinchingly at its production.

I totally agree with your comment, Rijin, and I’m very thankful for such a great response.