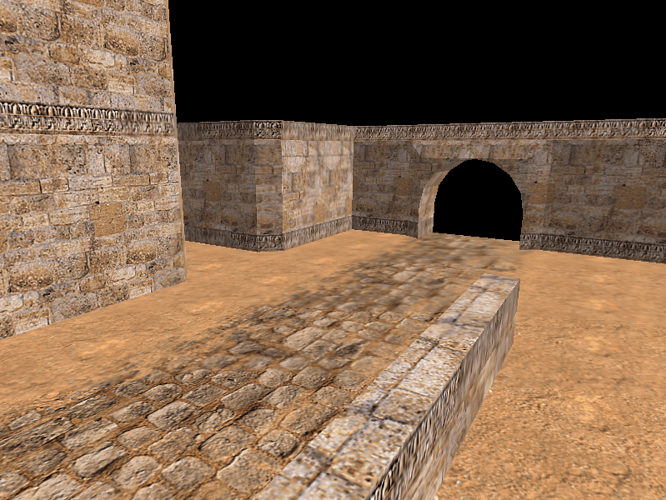 The Counter-Strike map de_dust is almost certainly the most globally recognized First-Person Shooter map of all time. It was created by a small group of independent modders, who schematized its creation via a detournement of screenshots leaked from a major video game publisher.

“If you grow into your own sense of self and body knowing that both space and time are normatively known to be under your control, then certainly all space, all time and thus all history, archaeology, and heritage is your body’s or no body’s.”
Uzma Z. Rizvi

-Think back to your experiences on the playground, right? If a little boy pulled your, hair or pushed you, people were like, “Oh, he likes you!!” And then, if you cried, it was that you were being “too hysterical” and that you should “just ignore it.” But nobody is telling the little boy, “You don’t have the right to touch people if they don’t wanna be touched, you know?…”

-Culture is just a series of experiences, right, and behavior like that snowballs. The more a little cis white boy is told that he has the right to touch people, and that no one can stop him…

-A little boy of color is definitely being told the opposite…

-These kids, you can tell, they’ve already learned that they’re entitled to all of the space around them and that its theirs to take…

“When past and present collide, the fate of all worlds hangs in the balance. War. It is the lifeblood of this world. We are its children. Soon, its masters. Ours is a legacy of conquest. A rising tide of blood and iron that will wash over this world and all others. Our bond is iron. Our will unbreakable. Who will stand against us?”

Its mechanistic protocols of control, exploitation, and expansion catalyzed by industrialization, the geopolitical incursions of highly-toxic Western masculinity have everywhere produced pockets of keen awareness of this masculinity’s illegitimacy and inadequacy. The virtual potential for various forms of liberatory politics to have purchase on the real is increased when these pockets gain depth, density, rationale, and kinesis. It is clear that the dual emergence of telecomputation and the Carbon Liberation Front has given the left project accidental access to the privileged space of End-Game Fantasy [1] and participation in what Uzma Z. Rizvi calls “the speculative fiction of time.”

(m)0ther-d(e_)aughter internet has brought their children to our future-birth. Big Daddy Mainframe, haunted, grotesquely and algorithmically (re)produces and (re)presents that hegemonic masculine organism which has brought its own future-death.

Rizvi constructs a platform for archeological intrusions into End-Game Fantasy. She suggests, after Bill and Ted’s, that, within this fantasy space, “the heteronormative white male protagonist might have a chance to control the past. It is that body which seems to be allowed to move through time, controlling and developing technologies that create those pathways.” There is indeed a pantheon of heteronormative white male (henceforth HWM) technologies which allow for His colonization of past, present, and future. Some broad examples: history and the archive are technologies of controlling the past, ideology and science are that of controlling the present, and semiofinancial capitalization of social power is that of controlling the future. Rizvi points to the prospect of weaponizing these technologies towards emancipation, and explicitly cites her experiences working as a field archeologist when proposing that a science that recognizes “improvisation” (we could say: non-linearity, contingency) is one that could “disrupt Western normative modernity.”

Following Rizvi’s invocation of Octavia Butler’s 2024 future-religious mantra of contingency as the future-birthplace of “new materialisms, critical feminist theory, and science fiction,” and her understanding that radical alterity is necessarily of the future, we might consider that to be born of the future is to participate in one’s own birth. What is called for is a calibrated artificial dissemination.

Rizvi relates her experience, as part of the Harappan Archaeological Research Project, of excavating the space between/through/within a curtain wall and the wall behind it. A curtain wall, loosely, is a wall that hides or otherwise stands in front of another wall. Multiple curtain walls could potentially exist in sequence, each covering the last. While Rizvi, seeking to problematize linear HWM epistemologies via an acknowledgement of improvisation, emphasises the multi-temporality of what she found in that in-between space, I want to propose that the concept of “curtain wall” can be deployed as a useful, or at least interesting, conceptual metaphor. Perhaps most obviously, the idea of a “curtain wall” that obfuscates deeper surfaces has resonances with critical postmodern critiques of simulation and representation, of surface and infrastructure. What I will now briefly pursue, however, is a rough initial thinking of the affordances of walling, in general.

As Rizvi mentions, the walls that she excavates in her archaeological practice are, in part, “forms of ancient social control.” If we, as proper left accelerationists, are invested in overcoming the ‘genetic fallacy’, we can begin to think of forms of social control and constraint not as necessarily opposed to freedom, but as an ontological precondition for the emergence of any social praxis or rational navigation. We can understand this emergence as part of an ongoing, non-linear historical process that De Landa terms “mineralization.”

“In the organic world…soft tissue (gels and aerosols, muscle and nerve) reigned supreme until 500 million years ago. At that point, some of the conglomerations of fleshy matter-energy that made up life underwent a sudden mineralization, and a new material for constructing living creatures emerged: bone. It is almost as if the mineral world that has served as a substratum for the emergence of biological creatures was reasserting itself…Primitive bone…made new forms of movement control possible among animals…About eight thousand years ago, human populations began mineralizing again when they developed an urban exoskeleton…[which] served a purpose similar to its internal counterpart: to control the movement of human flesh in and out of a town’s walls.”

A proper left accelerationist could also claim that the post-68 left has been allergic to walling, insofar as walling implies institutionality, hierarchical flows, strategic rationality, and the ability to consistently control flows of matter-energy towards real, material impact. All of these allergens fall within de Certeau’s category of ‘the strategic’.

I call a “strategy” the calculus of force-relationships which becomes possible when a subject of will and power (a proprietor, an enterprise, a city, a scientific institution) can be isolated from an “environment.” A strategy assumes a place that can be circumscribed as proper…and thus serve as the basis for generating relations with an exterior distinct from it (competitors, adversaries, “clienteles,” “targets,” or “objects” of research)… I call a “tactic,” on the other hand, a calculus which cannot count on a “proper” (a spatial or institutional localization), nor thus on a borderline distinguishing the other as a visible totality. The place of a tactic belongs to the other. A tactic insinuates itself into the other’s place, fragmentarily, without taking it over in its entirety, without being able to keep it at a distance…The “proper” is a victory of space over time. On the contrary, because it does not have a place, a tactic depends on time-it is always on the watch for opportunities that must be seized “on the wing.” Whatever it wins, it does not keep.

It is a self-inflicted tragedy when the left considers itself to be restricted to only tactical operations, and a disgrace when the left considers its opting-out of strategic power to be its source of purity and critical virtue. The Networked subjectivity, for which time is increasingly experienced as a hyper-focused Eternal Present that can never be fully grasped, finds it nearly impossible to make impactful tactical decisions, because temporality itself, in its future dimension, has been foreclosed on. De Certeau’s warnings of the shortcomings of Strategies must, in light of De Landa’s call for a healthy balance of meshworks (read: tactics) and hierarchies (read: strategies), be kept in mind, but, more pressingly, his examination of strategic praxis could be a constitutive node in some diagrammatic science of geopolitico-aesthetic instrumentalization.

On the uses of walls in video games

Insofar as strategic decision making must be performed from some “proper” position, by means of which distinctions can be made between in-group and out-group, between Decider and Other, the construction or presence of walls allows for strategies to unfold. I suspect that the conceptual metaphors of ‘curtain wall’ and ‘walling’ can be expanded towards a strategic understanding of a variety of walls, both corporeal and non-corporeal.

The End-Game Fantasy of HWM appears, in video games, in its idealized form. Player characters typically have access to a variety of means of rehearsing the Western tropes of violent masculinity, spatiotemporal colonization, and immortality. Pwning qua pwning. Recently, the HWM dominance of videogame space has been challenged, leading to myriad tantrums from the footsoldiers of HWM, who can never tolerate any challenge to their ability to do whatever the fuck they want. What does a Xenofeminist participation in this challenge amount to? Is there any way to re-route the overflowing libidinal reserves of the gaming community?

If the Fog of War is a gaming mechanic that permits primarily tactical gameplay, Line of Sight is a mechanic that encourages players to think strategically. Gameplay mechanics in general can be thought of as existing on a tactical-strategic spectrum.

Kiting. A mechanic that easily traverses both tactical and strategic vectors.
gif source

In MMORPGs, players abuse Line of Sight and “taunt” abilities to pull (“herd”) groups of enemies into a specific location, where they are all decimated.
gif source

NOTES
1 A term detourned from the developers of League of Legends , who use it to describe their design goal of enabling all players, over the course of a match, equal access to the acquisition of currency, powerful items, and game-altering abilities. This is accompanied by a continually re-established ‘balance’ between all playable characters, as to achieve a meritocracy of gameplay outcomes.