Santiago Zabala on "emergency aesthetics" and the demands of art 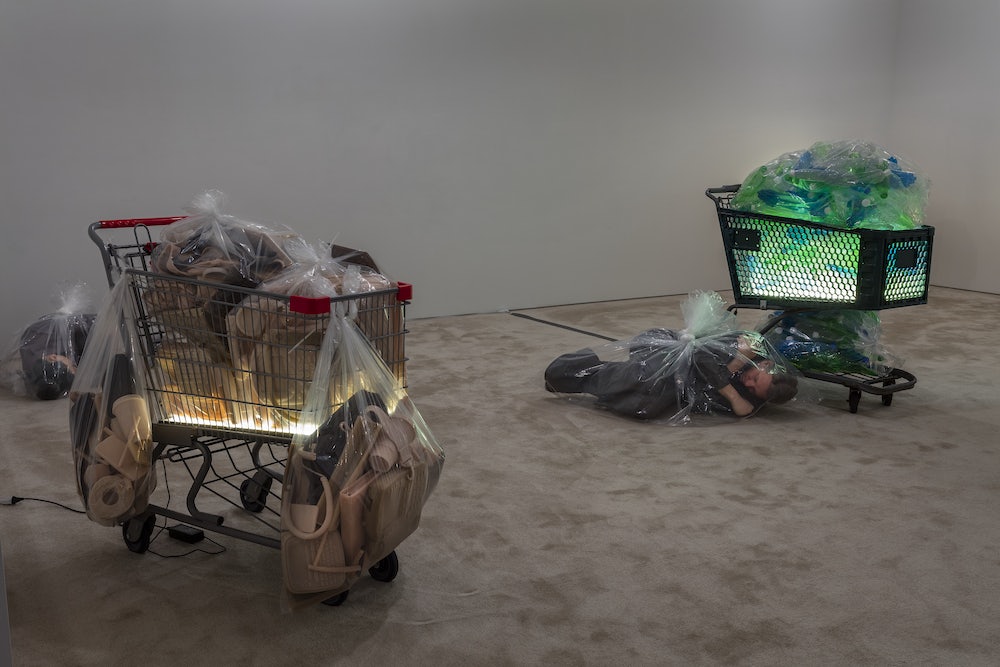 Josh Kline, from the exhibition “Unemployment,” 2016. Via The New Republic.

When philosophers turn to art today it seems to be because they have lost hope in politics, religion, and philosophy. If you have written on religion and politics, as I have, your colleagues and students start looking at you with pity when you turn to writing about art, as if you have given up and are simply trying to enjoy yourself. But what precisely would you be giving up? Is it possible that contemporary art now provides more productive possibilities to save ourselves and change the world than religion and politics?

Even though art, just like religion and politics (and even history), has been declared dead several times, it always returns with a vengeance—and with a demand. This is why the main goal of aesthetics today, as Michael Kelly points out, “is to explain how the transformation of demands on art to demands by art is already a reality in some contemporary art.” Turning to these demands means that philosophers continue to search for a realm where Being emerges, that is, where our existential condition is disclosed.

This year we have not entered a condition of “alternative facts” and “post-truth” as many believe; rather, we have returned to the imposition of an order that declares one set of facts and disallows the possibilities of different interpretations. The greatest emergency has become the absence of a sense of emergency, denying the most obvious emergencies (climate change, civil rights, human rights), which are now hidden behind this new appeal to order. This is why to be intellectually free today means to create intellectual disruptions, that is, to disclose the existential emergency at the core of the current absence of emergency.

While these disruptions can occur in religion and politics, the institutions that sustain these practices are also the ones that frame them. Philosophy, too, as it has been debated in the Stone, struggles with the framing structures of its institutions. And the same can happen to art through the art world, which often ends up reinforcing the very structures and systems it ought to be criticizing. But although the art world, like religious and political establishments, is also a system with boundaries, hierarchies, and rules, it has been affected by globalization in a different way, one that through actual exchange lets works emerge for different purposes and in unusual settings. This is evident in the different works of art displayed in art fairs and in the diverse audiences of biennales: in the rigid art fairs, the viewer contemplates valuable objects, but in biennales, the members of the audience all take responsibility for an experience that concerns everyone. As Caroline Jones recently explained, it “is the emphasis on events and experiences, rather than objects, that constitute[s] the surprising legacy of biennial culture.”

The fact that the latest trend in biennales, which have increased markedly in number in these past decades, is to offer these experiences in such remote places as Antarctica and the California desert is an indication that globalized art demands from us a global intervention. The “globalization of the art world,” as Arthur Danto once said, “means that art addresses us in our humanity, as men and women who seek in art for meanings that neither of art’s peers—philosophy and religion—in what Hegel spoke of as the realm of Absolute Spirit, are able to provide.”

The artists who seek to expose these meanings today are the ones whose works demand our intervention in masked and hidden global emergencies, emergencies that are concealed in the idea of their absence. This is evident in Néle Azevedo’s melting ice sculptures and Mandy Barker’s marine plastic series, and also in political works such as Josh Kline’s “Unemployment” exhibition or Eva and Franco Mattes’s “dark web” installations. These artists demand that we intervene in environmental, social, and technological emergencies that we have not begun to confront because of the return to order I have already mentioned. Their goal is not to rescue us from emergencies but rather to thrust us into emergencies that concern our Being, our vital existence. This is why, as Danto said in his last book, most “contemporary art is hardly aesthetic at all, but it has in its stead the power of meaning and the possibility of truth, and depends upon the interpretation that brings these into play.”

These artist’s works call philosophers to respond to art’s demands. While it’s probably too early to declare an “emergency turn” in relational or speculative aesthetic theories, it is possible to distinguish the sort of intervention each of these positions demands. Relational aesthetics seeks “human interaction,” and speculative aesthetics seeks to reveal the “cryptic inner reality” of works of art. But emergency aesthetics intervenes in the danger that the absence of emergency holds. This danger frees aesthetics from its traditional preoccupation with beauty and calm contemplation in order to overturn the relationship among the work of art, the artist, and the audience. Through these works of art, the audience becomes responsible for an emergency that is absent because of the very danger it implies. If, as Hölderlin says, where “danger is, also grows the saving power,” then turning to art’s demands instead of those of religion and politics is not giving up but rather venturing into intellectual disruptions that are vital for our existence.

Santiago Zabala is ICREA Research Professor of Philosophy at the Pompeu Fabra University in Barcelona. His forthcoming book is Why Only Art Can Save Us: Aesthetics and the Absence of Emergency (2017).

Great article!!! Art as participative responsibility of the public is a central issue that should concern not only the philosophical debate today, but the cultural discourse and activity, too. It is, like the author says, an interaction - and where there are interactions, there is also a hope to bring a change. So, in a certain way, participative art can help revolution!

“Even though art, like religion and politics (and even history), has been declared dead several times, it always returns with a vengeance—and with a demand.”

Who has declared art to be dead? Who are the artists who are making these demands, what are they demanding, and what are some examples of contemporary art where such demands have been manifested, and satisfied, and by whom?

"This is why the main goal of aesthetics today, as Michael Kelly points out, “is to explain how the transformation of demands on art to demands by art is already a reality in some contemporary art.”

Who is Michael Kelly?

“This year we have not entered a condition of “alternative facts” and “post-truth” as many believe; rather, we have returned to the imposition of an order that declares one set of facts and disallows the possibilities of different interpretations. The greatest emergency has become the absence of a sense of emergency, denying the most obvious emergencies (climate change, civil rights, human rights), which are now hidden behind this new appeal to order. This is why to be intellectually free today means to create intellectual disruptions, that is, to disclose the existential emergency at the core of the current absence of emergency.”

HUH??? Who is “we”? Where is this absense of a sense of emergency. who has lost this sense, and who (other than Trump) is denying these ‘most obvious emergencies’?

I could go on, but seriously Professor Zabala you need to provide facts to backup your insight and perceptions.

Maybe “revolution” is a somewhat misleading term few artists would want to be associated with today, but I do think that a need for change is more pressing than ever. Especially as it seems that everything around us is constantly changing when, in fact, the opposite is true and great efforts are being made - by whoever represents authority - to keep things as they are.

If, instead of obeying the rules of the game - that is, instead of a “return to order” -, we want to argue about the game and its rules, there’s no better place to turn than art. Because art is or should be, in a certain sense, a form of play always suspicious about the rules and codes that govern it. Unlike sport, which is a conservative form of play, art has always been difficult to “tame” and exploit by authority, especially by political authority (no wonder poets are banned from Plato’s ideal community).

As long as art keeps being a threat to authority and order, it cannot but make a claim on us and the world we’re living in, and thus disclose previously unimaginable sources of meaning. An “emergency turn,” then, might indeed be under way and this article, I think, does a great job at pointing towards those contemporary artistic trends that embody it.

I agree with you, maybe only few artists would like to be associated to the term revolution. Well,I think the most important thing here, is not what the artists want, but that their works of art provoke many (maybe little) “revolutions” and subversive acts, playing beyond the control of politics and authority (Huizinga docet).