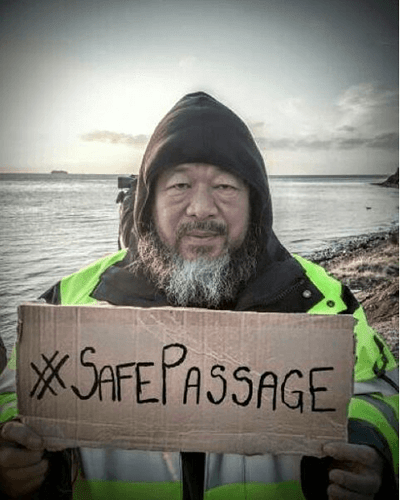 Since Ai Wei Wei’s passport was returned by the Chinese government, the artist has launched back into international endeavors, accepting a teaching position at UdK Berlin, installing a new commission in a French department store, and spending recent weeks on the Greek island of Lesbos. Ai’s Instagram feed has turned into a heart-wrenching first-person account of the refugee families arriving on the shores of Lesbos.

In light of his experiences on Lesbos, and a recent law that is hostile to asylum-seekers and has passed in Denmark, Ai has withdrawn his work from an exhibition at Faurschou Foundation. The Guardian has the report, in partial below.

The Chinese dissident artist Ai Weiwei has closed down his exhibition in Copenhagen in protest at a new law that allows Danish authorities to seize valuables from asylum seekers.

The 58-year-old, who is currently on the Greek island of Lesbos undertaking research on Europe’s refugee crisis, told the Guardian: “My moments with refugees in the past months have been intense. I see thousands come daily, children, babies, pregnant women, old ladies, a young boy with one arm.

“They come with nothing, barefoot, in such cold, they have to walk across the rocky beach. Then you have this news; it made me feel very angry.

“The way I can protest is that I can withdraw my works from that country. It is very simple, very symbolic – I cannot co-exist, I cannot stand in front of these people, and see these policies. It is a personal act, very simple; an artist trying not just to watch events but to act, and I made this decision spontaneously.”

An earlier post on his official Instagram and Facebook accounts read: “Ai Weiwei has decided to close his exhibition, Ruptures, at Faurschou Foundation Copenhagen, Denmark. This decision follows the Danish parliament’s approval of the law proposal that allows seizing valuables and delaying family reunions for asylum seekers.” The exhibition opened in March 2015 and had been due to close in mid-April.

The law has provoked international outrage, with many human rights activists criticising the delay for family reunifications as a breach of international conventions.

Jens Faurschou, owner of the Faurschou Foundation in Copenhagen, told the Guardian: “When I woke up today I did not expect to get that call, but I was not surprised by his [Ai’s] reaction.

*Image of Ai Wei Wei in Lesbos via Ai’s Instagram