On J20 and Beyond: A Declaration of the Arts Against Trumpism 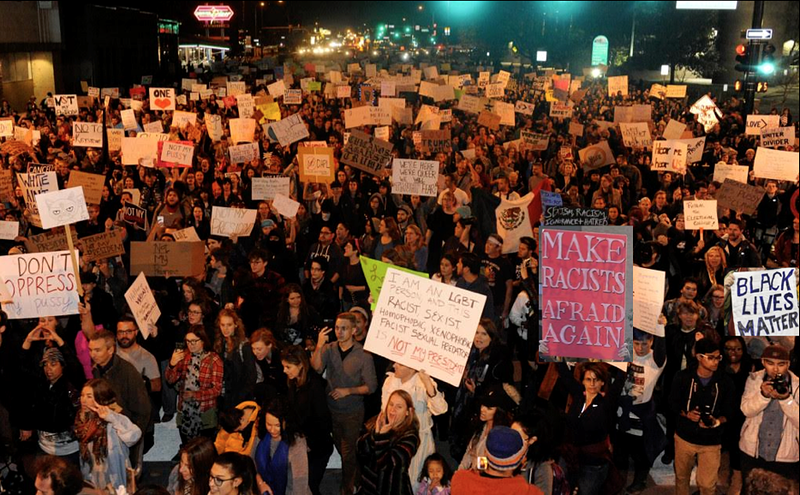 January 20th marks the day that Donald Trump assumes the office of President of the United States. It also marks the day that multitudes will mobilize across the country in a collective disruption of business as usual, refusing to normalize the transition to Trumpism: a toxic mixture of white supremacy, misogyny, xenophobia, Islamophobia, anti-Semitism, homophobia, ableism, militarism, kleptocracy, and oligarchic rule that bears a strong resemblance to Fascism.

The disruptions of J20––and the Women’s Marches across the country the next day––build on generations of intersectional struggle within and outside the United States. Yet the advent of Trumpism has pushed these antagonisms to a new level of intensity. It has awakened even complacent sectors of society to a sense of emergency that many people––especially those who have not reaped the poisoned benefits of white supremacy––have long experienced as the norm. J20 is the inauguration of new phase of resistance at a massive scale.

Committed to invention and critique, arts of all kinds are essential to any long-term political mobilization. Yet the art world––the complex of galleries, museums, theaters, nonprofits, schools, publications, fairs, and festivals in which many of us work––is a contradictory field. It is torn between the radical possibilities of art and the constraining limits of institutions, while looming over both are the machinations of neoliberal oligarchs. Much art is mobilized by elite collectors, donors, and celebrities––liberal and reactionary alike––not only as an item of luxury consumption and speculative investment but also as a vehicle of gentrification.

The Trump regime brings these contradictions to a head. People of conscience who work in the art world must decide how to respond to current crises that are only bound to intensify: from austerity and privatization, to censorship and press intimidation, health-care cuts and abortion bans, raids and deportations, police killings and vigilante violence of every kind, all of which disproportionately impact the most vulnerable individuals and communities.

Despite its contradictions, the art world has significant amounts of capital––material, social, and cultural––at its disposal. The time has come to imagine and to implement ways of redirecting these resources in solidarity with broader social movements leading the way in the fight against Trumpism. In the process, we must acknowledge the overwhelming whiteness of most existing art and academic spaces, and work to dismantle systems of oppression within our own field, holding those with the most privilege and visibility accountable. We salute those institutions and organizations that have already begun to move in this direction, but these are structural transformations that no one entity can accomplish on its own.

1. Hold Institutions Accountable to Their Own Public Missions

Even private institutions such as the Museum of Modern Art tout public accessibility; we must insist that they actualize this rhetoric. Like universities, museums emerged as key elements of the modern public sphere; we must demand that they live up to these stated democratic ideals, while at the same time working to democratize their own organization. This pertains not only to museums but also to nonprofits, schools, foundations, and other types of institution.

2. Work to Dismantle Systems of Oppression Within Art Institutions

The forces that brought Trump to power suffuse cultural and academic institutions in ways large and small: from trustee boards, to staffing, pay-grades, and the micro-aggressions of everyday meetings, to exhibitions, programming, and publishing, to the constitution of audiences. Our vigilance on all these fronts is necessary. This means not only calling out oppressive behaviors after the fact but also contesting their practice proactively through the restructuring of power and the redistribution of resources. Many are starting to ask: What would reparations look like in the art field? How might an an anti-racist vision of the arts extend to a global scale, encompassing, for instance, the Boycott, Divestment, Sanctions movement?

3. Name, Shame, and Divest from Trumpists and Other Oligarchs in the Art World

Despite its cosmopolitan reputation, the art world is rife with Trumpists who use the social prestige of art to legitimize power. Ivanka Trump is an art world denizen; the Secretary of the Treasury, Steven Mnuchin, is the son of the owner of Mnuchin Gallery. Anti-democratic agents David Koch and James Murdoch sit on the boards of the Metropolitan Museum and the Dia Art Foundation respectively, and other predatory oligarchs populate the landscape. Let us not forget that Trump began as a real-estate developer, and that, from the Bronx to Boyle Heights, art is strategically used as a weapon of displacement by elites who also proudly identify as liberals. With a bit of research an “artigarchy” comes into view, providing a wealth of targets for future pressure and action as shown by the work of groups like Gulf Labor Coalition, Liberate Tate, BDS Arts Coalition, and Chinatown Arts Brigade.

4. Connect to the New Sanctuary Movement

Though centered in campuses and houses of worship, cultural institutions could become spaces for the practice of sanctuary: protecting employees targeted by Immigration and Customs Enforcement; creating hubs for the harboring of targeted individuals, families, and communities; mobilizing financial support; and providing artistic media platforms amplifying the ethos of sanctuary itself, namely that justice must take priority over unjust laws. This includes aligning with the work that is already being done on the ground by refugee and migrant communities and grassroots organizations.

5. Stand With Our Colleagues Beyond Metropolitan Centers

While the arts will come under attack across the board, individuals and organizations outside of urban centers and in “red” states will be especially imperiled. Funding cuts and other reactionary measures made in the name of anti-elitism must be resisted, and we can build a “museum network” to activate art and other cultural institutions as sites of protected civic discourse and dissent. At the same time let us look beyond the United States to support those fighting similar conditions in other countries.

6. Collectivize Resources and Spaces in Support of Anti-Fascist Work

Movements need infrastructure––physical, economic, and affective––for the gathering of people, the making of art, and the work of organizing. We should pool collective resources to these ends and cultivate a network of spaces for long-term work, while also providing on-ramps for those new to the movement. In the process we should look to examples such as Decolonize This Place, and many others that have come before, and ask in terms of both art and activism: What is the composition of the room? Whose voices matter in this space? Who can appear freely in public? Who gets to represent “the public”? How can we work together in a way that does not recreate the conditions that brought us to the historical moment of Trumpism in the first place?