Mutual Aid, Social Distancing, and Dual Power in the State of Emergency The viral crisis has mutated into a general crisis of social reproduction with no end in sight. With the shutdown of businesses, schools, and countless other institutions, millions are facing loss of income, housing, and access to basic survival resources, exacerbating long-standing inequalities and pushing ever more people into precarity. Confronted by popular pressure and the spectre of civil unrest, states have begun to undertake a “disaster socialism” of uneven and often contradictory aid measures. Still, conditions of emergency are intensifying by the hour and the current biopolitical regime faces an existential crisis.

Under such circumstances, the need for self-organized infrastructures of mutual aid, care and resilience could not be more clear. With the prospect of rent strikes and other acts of collective refusal on the horizon, how can we imagine the work of mutual aid flowing into the construction of a dual power situation in the coming weeks and months? As the system collapses, how can we build bases of autonomy and solidarity that will transform our relationship to the state?

At Woodbine, an autonomous space and organizing framework we have maintained in New York City since 2014, this is what we have been preparing for—to mobilize our networks, skills, knowledges, and energy to coordinate and provide for each other, while simultaneously building the longer-term capacity to face the future.

Last Friday, Sandy Nurse, a cofounder of the MayDay Space in Bushwick and a current candidate for New York City Council, tweeted: “Movement folks: we know how to mobilize quickly and effectively. Time to get in formation. Start the conversations now w/ local social networks & hubs on collaborating what safe direct support may need to look like, & what does scaling up and cross-neighborhood collab look like.” We shared her post across our social media platforms, and received immediate responses from friends and strangers alike reaching out to collaborate. Though the severity of this crisis is unprecedented in recent memory, many people seem primed for the moment, as if they have been waiting for it to arrive.

As we write, both experienced organizers and newly activated neighbors are participating in a dizzying flood of online coordination, from social media posts to Google docs, Zoom meetings and Signal threads. Just yesterday, a Google doc titled “Mutual Aid NYC” migrated to its own website, where hundreds of individuals are making plans for autonomous mutual aid and disaster relief on a local, place-by-place basis. From online resource guides to social media “hot takes,” there is much popular insight about how to navigate the current crisis. However, questions remain as to who, how, when and where these calls will be taken up.

As these online communications unfold, we must address the matter of real-life contact and physical space, along with their ethical, medical and logistical dilemmas. While recognizing the urgency of “social distancing” measures, how can we prevent them from becoming tools of political demobilization? What does it mean to normalize quarantine as a necessary condition during emergency? And what are our expectations when it comes to responses from the state?

There is a long history of radical mutual aid that links service provisioning with the construction of dual power. In New York’s radical history, this includes movements like the Black Panthers, the Young Lords, ACT-UP, and Occupy Wall Street. In more recent years, various decolonial and abolitionist formations involving mutual aid have emerged, including Take Back the Bronx and NYC Shut It Down, which is already adjusting its Feed the People (FTP) program to the crisis. These radical traditions exist alongside informal activities of interdependence, care and support that many communities already practice on a day-to-day basis, and which are now being activated in more deliberate ways.

The local experience of Hurricane Sandy should also be mentioned here, as the immediate response revealed both the potentials and limits of a crisis moment like the present. Occupy Sandy was a city-wide infrastructure of self-orgazined disaster relief after the hurricane struck New York in 2012. Some suggested it offered a prefigurative glimpse of “disaster communism.” However, it could also be argued that the primary function of Occupy Sandy was that of a supplementary service provider within the void left by the state, and that it was never able to become a sustained political formation capable of forcing concessions from the ruling class. At its best, it demonstrated collective capacity to directly confront catastrophe, and served as a crucible for relationships, projects and spaces in the subsequent decade⁠—including Woodbine itself.

Understanding the legacies and continuities of mutual aid are crucial to acting in the current moment. However, none of us have faced the surreal condition of social distancing. What does organizing in real life mean now, and what are our expectations of safety and responsibility?

We know that there are experienced and trusted organizers all around us, and we also know there are dormant organizing frameworks and relations that will need to be revived and reactivated. We know that we will need to share skills and practices with groups throughout the country. There are many others out there—at home, online, wanting to help, to volunteer, to contribute—with skills, knowledge and resources beyond which any of us realize. There will be the need not only to provide for our friends, but also our neighbors and community members. And we will need interfaces to be able to communicate with them, beyond our screens and social network bubbles.

At some point we will need to be with each other in person. The basis for shared recovery from the current and future crises will require us to see each other’s faces, hear each other’s voices, and touch the same surfaces. What will be the spectrums of risk, and what will be the best protective practices and guidelines for physical interaction when it occurs?

As the crisis intensifies, needs increase, and political conflict becomes inevitable, we will have to confront these questions. We will have to stand in solidarity and learn from workers in the “essential” services and industries: nurses and doctors, train conductors and bus drivers, bodega and grocery workers, cooks and delivery people, sanitation workers, and more. How will we approach physical distribution of resources, public gatherings and even street mobilizations? Assuming that state-based measures of relief will likely be accompanied by intensified forms of policing and militarization, how can we tackle the coming need for collective self-defense? How will movements relate to spaces that have been shut down and vacated, spaces wasting away as empty shells, or only functioning at their most bare capacity—hotels, dorms, luxury condos, schools, churches, museums, and whatever else that might be repurposed to meet collective needs? As we think through such scenarios, we also know that the extraordinary conditions of this crisis are likely to give rise to new tactics, techniques, and forms that we cannot imagine at present.

At Woodbine we are asking these questions as a matter of immediate praxis while we deliberate how, if, and when to activate our space as an infrastructural hub within the crisis, beyond the current period of isolation. This will require building relationships and trust, to find and become reliable collaborators who can assess their and others risk and capacity. We are asking people to think seriously about what the time calls for.

Neighbors have already reached out to us about starting a food pantry based upon needs that have intensified with loss of income and the closure of schools. They put together a list of suggestions for us: bags of rice, canned beans, tomato sauce, pasta, bread to freeze, hand soap, peanut butter and jelly, hummus, butter, waffles and syrup, eggs, boxed milk, canned soups, frozen veggies and juices, oatmeal and cereals. Our friends have begun distributing masks and producing hand sanitizer.

As we write this, a local community response organization called Hungry Monk is distributing fresh produce for free outside of a local church in Ridgewood. We have also discussed maintaining Woodbine as a pick-up site for food and supply drives, but many uncertainties remain. What happens if local supply chains are disrupted? What is needed is to forecast the coming needs for supplies and services, and build accordingly.

As access to money and income becomes increasingly uncertain, how will we and the state manage the costs of being alive? Will we see increasing socialization and state intervention, or will economic and logistical breakdown require the development of alternative and autonomous equipment and infrastructures? In addition to all of the volunteer labor that will be required of us to support each other, we must also test our strength in calling for and organizing around a set of demands to our elected officials at the city, state, and federal levels. Calls for a Just Green Stimulus have been launched, and the following demands have already been circulating, alongside a growing opposition to paying rent as normal on April 1:

We must prioritize our community members and neighbors who are most at risk, including the elderly, disabled, immunocompromised, those who require regular aid and support, and the unhoused. Many are already experimenting with delivery services for food and supplies based upon online databases that match people and resources. We must also be supporting aid and care workers, who will be over-extended in the coming weeks, and who will no doubt have economic and family needs which require outside support. We should already be checking in on each other to assess needs, and build a culture of honest and open communication, as well as a sense of shared responsibility. We should not be ashamed or embarrassed to ask each other for help. Mutual aid will be our beginning, but with the horizon of building autonomous formations capable of challenging the political and economic system that led us here.

Dual power refers not to a self-enclosed separatism, but to the simultaneity of building and demanding. In the coming weeks and months, we will have to figure out not only how to survive the present moment, but also how to develop into a force that prevents the restoration of the order that is currently failing. As we move into spring, people everywhere are gathering themselves, with masks and gloves and disinfectant, for the beginning of a new life in common. 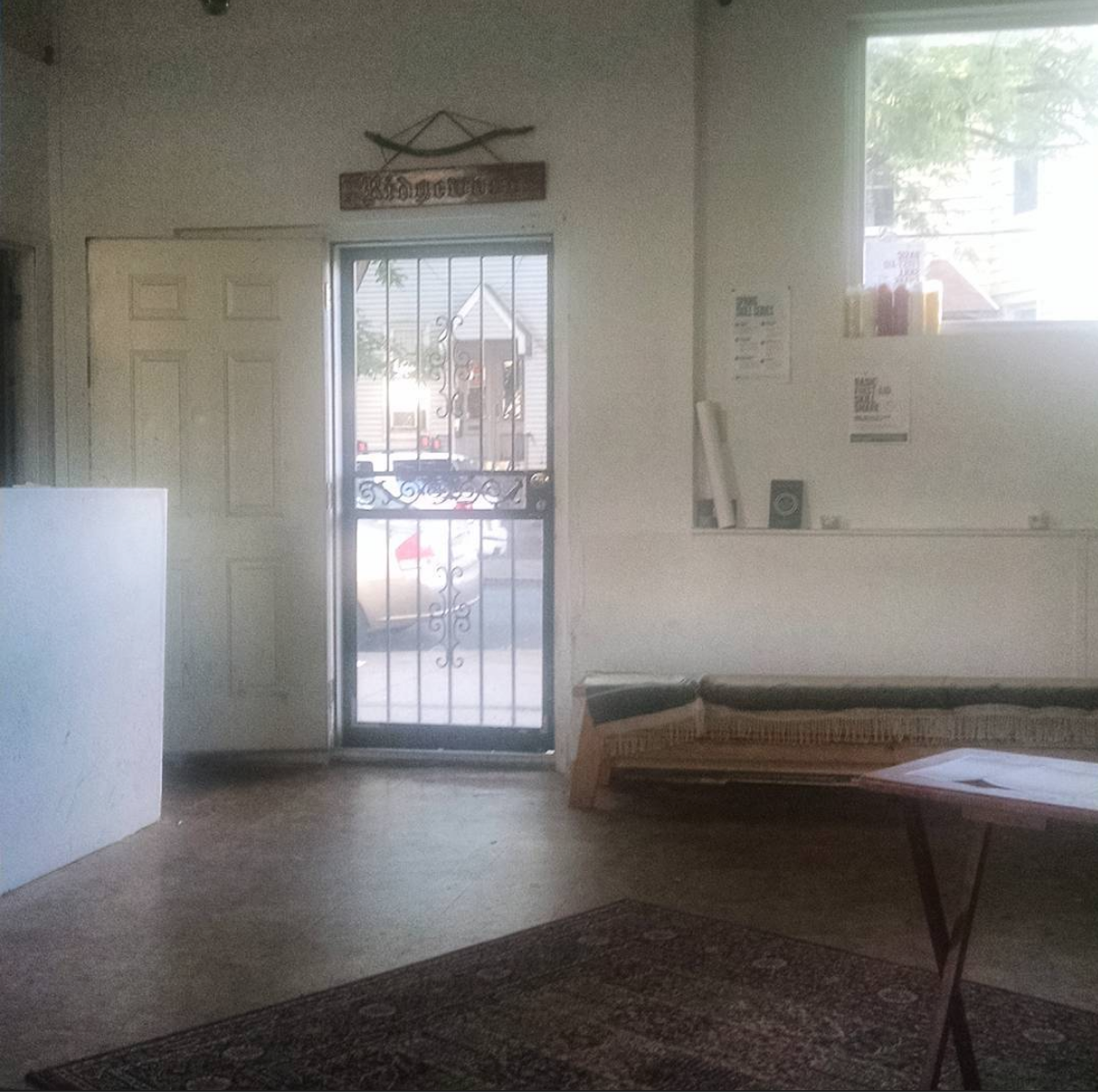 Woodbine is a volunteer-run experimental hub in Ridgewood, Queens for developing the practices, skills, and tools needed to build autonomy. https://www.woodbine.nyc/

A previous version of this text appeared in ROAR magazine.