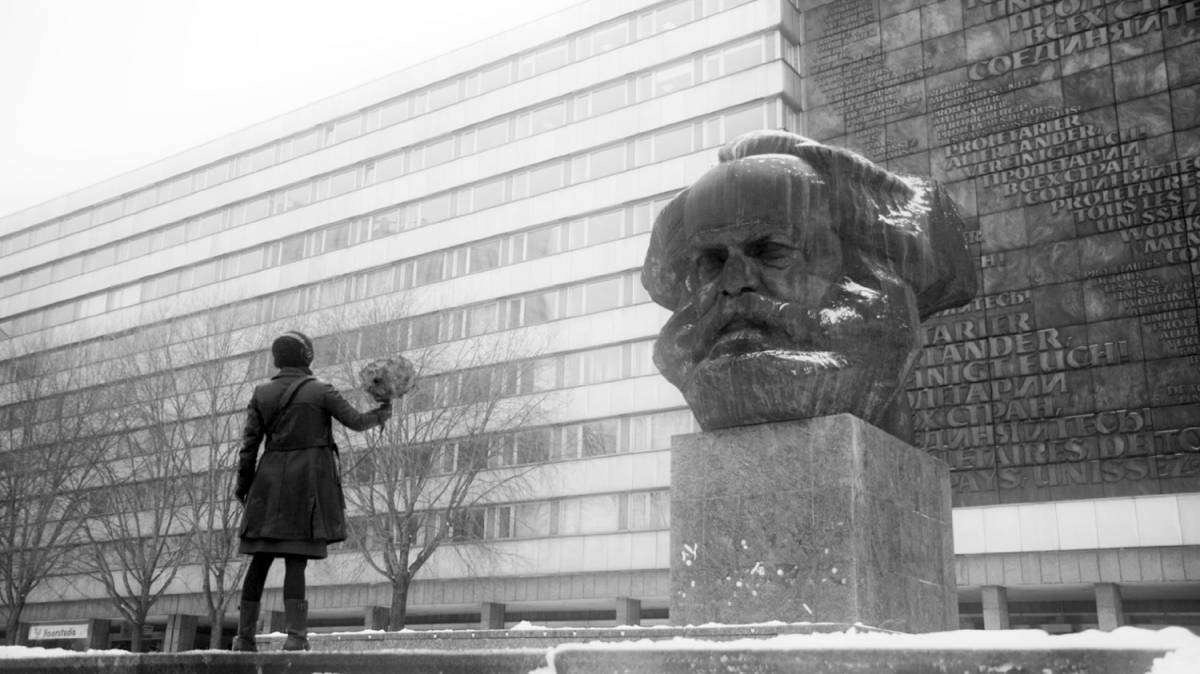 At the Verso blog, McKenzie Wark close-reads one of the most famous parts of the Communist Manifesto—the passage that begins, “All that is solid melts into air, all that is sacred is profaned …” He does this in the service of responding to a perennially urgent question: “Why Marx Now?” Here’s an excerpt from the piece:

I have a small confession to make here: my loyalty is more to the working class than to Marx. I was raised in the labor movement, was taught my Marx at party school. Our Marxism was always a little vulgar. Like Alexander Bogdanov, I take the most enduring feature of Marxism to be this: the point of view of the working class. To me, Marxism has no essential method or dogma or theory other than that.

So when asked: ‘Why Marx now?’ I don’t think the answer lies in a return to a philosophy or method or dogma that was current in the small world of even the more cosmopolitan radical thinkers of the middle of the nineteenth century. “All that is solid melts into air, all that is sacred is profaned,” and surely that includes even the verities of classical Marxism itself.

The Marx of use now is no particular method or dogma or philosophy. The Marx of use now as then is the labor point of view. Or to put it in the robustly vulgar terms in which an old comrade explained it to me: the party sticks to working class like shit to a blanket.

Image: Still from the documentary Karl Marx City (2016) by Petra Epperlein and Michael Tucker. Via The Georgia Straight.

This type of “workerism” is offensive. Marxism is the science of the development of civilisation and the battle for mankind to get to a new level of culture by overthrowing the capitalist ruling class and, via the dictatorship of the proletariat, achieving first socialism on the planet, then communism. The “labour point of view” the above comment espouses is pure anti-theory gibberish that could mean anything at all, from corrupt racist trade unionism to Labour parliamentarianism to the dead-headed British CP to Trotskyist anti-Sovietism. It is hopeless anti-scientific anti-theory, and plays on a very bad problem in particular for the British working class - their age-old disdain for theoretical struggle.
Marxism, and its further development by Leninism, is precisely breaking through all the bourgeois ideological barriers to once again penetrate mass consciousness (before mass revolutionary parties are rebuilt) because the monopoly-capitalist “over-production” crisis and imperialist warmongering are spreading misery and destruction across the planet, with the ruling class resorting to fascist methods all over the place. Interest in real Marxism and Leninism can only grow.
It is the capitalist media and bourgeois commentators and, of course, the Trot and revisionist fake “left” that want to deny Marxism is a science or that it has any achievements to its name.
In fact, bourgeois cynicism reaches its lowest point with the Trots and revisionists, who claim to be “Marxists” or even “Leninists” but pretend that just talking about the class struggle is Marxism (a view that Marx famously treated with scorn). Occasionally these middle-class charlatans claim to be “for revolution” - usually the ignored small print in the recesses of their papers or websites. But all the time they collapse into support for the bourgeois Labour party.
For example, practically the entire fake “left” back Trump, Obama, May and Macron’s “war on terror” and “condemn the terror” of the Third World, particularly the Middle East, where millions of the oppressed cheer on any blows struck against imperialism, even if such attacks tragically involve Western civilian deaths. In opposition to such “left” frauds, Marxist science explains that the warmongering destruction flows entirely from global monopoly-capitalist crisis breakdown and that capitalism is creating its own gravediggers, an international proletariat that simply refuses to lie down and die.
Rather than swallowing the ghastly “workerist” anti-theory nonsense espoused above, workers should instead start reading Marx, Engels and Lenin and the Economic & Philosophic Science Review (see epsr.org.uk) so that they can get a grip on the crisis, Trump’s lunatic fascism, the counter-revolutionary rubbish spouted by the Trots and revisionists, the need for Leninism, the need for the dictatorship of the proletariat and the need to rebuild Bolshevik parties.
One massive current debate for socialists to win is the garbage being put out about “left-wing anti-Semitism”, which is in fact the last-ditch ideological defence of Zionism which is busy massacring Palestinian children and can only exist as a genocidal colonial implant on Palestinian land.
Since the UK Labour Party supports both colonial-imperialism and the “state of Israel”, and the “left-wing” leader Jeremy Corbyn supports the fraud that there is such a thing as “left-wing anti-Semitism” doesn’t this show the need for Marxist-Leninist science to demolish such lying arguments? And, with all the confusion around this area of politics, doesn’t this show why anti-theory workerism is useless?
Or as Lenin summed up: “Without revolutionary theory, there will be no revolutionary practice.”
Again, see epsr.org.uk.