McKenzie Wark on the Bushfires in Australia 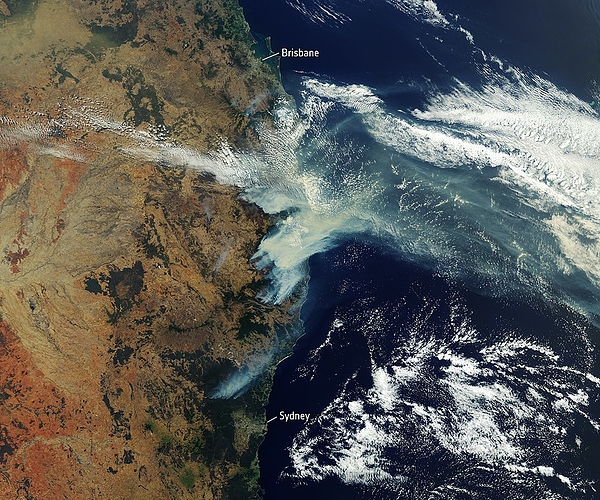 In Commune magazine, McKenzie Wark reflects on the violently destructive bushfires that have engulfed her birth country of Australia in recent months. Wark describes the incredible grief she feels at seeing images of the landscape of her childhood go up in flames, even as she acknowledges that this destruction can be traced back to the settler-colonial project of her ancestors who immigrated to the continent. Read an excerpt from the piece below.

I feel unable to let out all of the feelings I have about it. Everyone I know is safe, although it’s been an anxious time, checking all channels. But how to put that alongside seeing pictures of so much dead wildlife and knowing that many species will never recover? I think about all those animals, desperate to flee the flames. Whole habitats will never come back. The birdsong I used to hear will have notes missing. The magpies, which can imitate other birds, are doing impressions of fire alarms.

I feel implicated. I’m from settler culture, which has brought the continent to this sorry state in a mere two hundred-odd years. My ancestors traveled from Scotland to build gas works for lighting. For years now, much of settler culture has let itself be gaslit by climate denial ideologues in the pay of the fossil fuel industry and promoted by the Murdoch press. We’ve been persuaded to disbelieve our own senses, to neglect the evidence that’s been in front of us for years that “development,” such as it is, can’t go on without breaking this dry, fragile continent. Even many of those not so coerced by this had not expected things to start falling apart quite so soon.

I feel that if I give in to despair, it may prove bottomless. That the things for which I once fought, back when I lived there, amounted to nothing and now can never be. All I could cling to—a faint glimmer of light in the haze—would be that Australia’s entire political apparatus is now exposed as incapable of dealing with reality.

so sorry for people living in Australia. as a vegan and eating only vegetarian, i’m extremely sorry for those animals too. thanks for the post, although fires stopped, I’m still praying for Australia, is a though year for them…