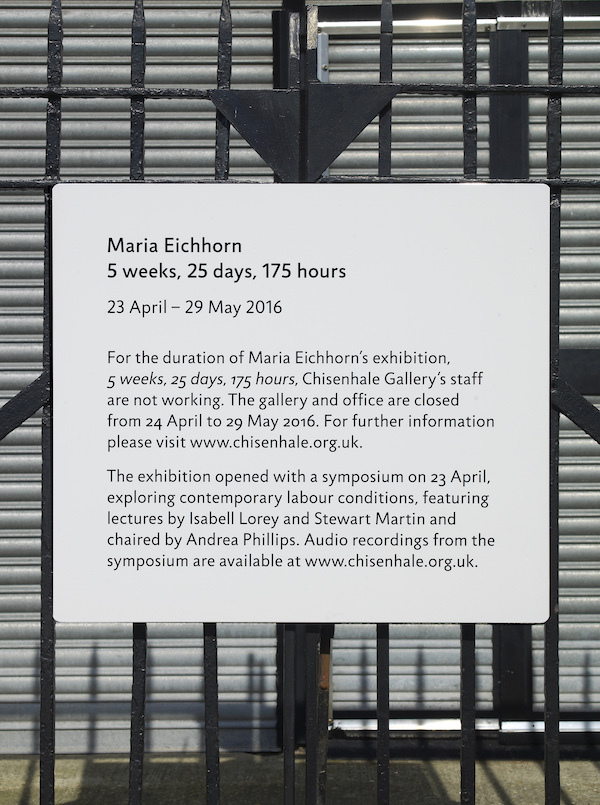 Admittedly, I am sometimes wary of institutional critique works in 2016 as they so often look like politics but so rarely act as such. Just when I thought institutional critique was dead, Maria Eichhorn shows up at shuts down Chisenhale! According to Eichhorn in Artforum, the London gallery will be closed for the entire 5 week duration of her exhibition. If you’re worried about Polly Staple’s email pile-up, rest assured that Eichhorn has planned to delete all incoming emails after auto-sending a detailed response to the sender.

I find the project especially interesting in contrast to the opposite, more conventional approach to institutional critique that keeps the gallery open as if in gesture to welcome more diverse audiences. Take for example Michael Asher’s 2010 Whitney Biennial contribution in which he proposed to keep the museum open all hours for a week. The project only ran for three straight days, rather than seven, as the Whitney couldn’t afford to pay for the extra labor hours to keep the museum open. Michael Asher is an incredible artist in his own right, but in a time when time, labor, and worker visibility have superseded the authority of the museum in importance, Eichhorn’s 5 weeks seems like a most interesting update to the genre.

RESEARCH, EXPERIENCES, AND VARIOUS KINDS OF REFLECTION lead me to ideas. In this case, my engagement with time and the way it’s defined in relation to labor led me to the creation of this piece. My show at the Chisenhale Gallery is a way of giving time back to the staff who work there. When they accept this offering, without their wages being suspended, the work will emerge. Jacques Derrida states in his book Given Time: I. Counterfeit Money (1991) that “to give time, the day, or life is to give nothing, nothing determinate, even if it is to give the giving of any possible giving, even if it gives the condition of giving.” Proceeding from this thought experiment of Derrida’s, I want to interrogate the possibility of suspending the capitalist logic surrounding the notion of exchange and try to make a space in life sans labor a reality, by returning time to those who lack it, or who need it.

That the exhibition space and gallery offices are closed is just a spatial consequence of this gesture—these are, after all, the areas where the staff pursues its labor. The institution itself and the actual exhibition are not closed, but rather displaced into the public sphere and society. A sign will be affixed to the Chisenhale gate explaining all of this, and additional information will be made available on the gallery’s website, its social media, an so on. An automatic e-mail reply written specifically for this exhibition will also include a message stating that all incoming e-mail will be automatically deleted and that said recipient cannot be reached until after the close of the exhibition. When the gallery’s employees come back to work, there will not be a great deal of e-mails waiting to be dealt with, thankfully.

Boris Groys wrote: “[a]rt activists do want to be useful, to change the world, to make the world a better place—but at the same time, they do not want to cease being artists;” this is important to consider in relation to Eichhorn’s project. Though this work is certainly provocative, it is not necessarily political and especially not radical. The project negates itself from addressing the more contentious issues that it raises by identifying first and foremost as an artwork, and thus ambiguously rejecting any political agenda or call for change from the increasingly precarious conditions of the existing labour market. At best, the work is merely a comment or an observation, and at its worst, it is an aesthetisisation of labour. Though the work relies on the staff’s withdrawal of labour, this is not an autonomous emancipation (that one might see with strike action for example), thus the artist is given too much agency and mistakenly attributed hero status. In actuality, the staff become merely re-employed in another way; alienated and objectified, they become the vehicle for the artist, the material.

Finally, the work remains ambiguous regarding the precarious modes of labour that the Chisenhale Gallery still engages with, such as employing staff on zero-hours contracts and running a volunteer scheme. Though Eichhorn’s project makes an ostensibly radical demand from the gallery – to entirely close for five full weeks whilst continuing to pay its employees – it neglects to consider the implications for staff on flimsy zero-hours contracts or those without contracts at all (i.e. freelance technicians) who are effectively coerced into taking time off without any form of compensation, financial or otherwise. Additionally, by still implementing a volunteer programme as part of their operations planning the gallery continue to perpetuate the systemic problems of cultural capital. Supporting this intervention, Chisenhale are at once challenging existing structures of waged labour whilst undermining the integrity of this initiative by ignoring their own complicity within the very oppressive structures that they seek to subvert.

Though Eichhorn’s project makes an ostensibly radical demand from the gallery – to entirely close for five full weeks whilst continuing to pay its employees – it neglects to consider the implications for staff on flimsy zero-hours contracts or those without contracts at all (i.e. freelance technicians) who are effectively coerced into taking time off without any form of compensation, financial or otherwise.

This is a good point–has it been confirmed that those with zero-hours contracts won’t be compensated at all?

I wouldn’t consider this artivism, though, or an opportunistic aestheticization of labor, especially considering she’s making no object from the piece. I assume Eichhorn isn’t making little paintings to sell at Art Basel to represent the project…

Another, dissenting view from Niru Ratnam at The Spectator. Ratnam takes issue with Chisenhale staff getting a “free holiday,” though in my opinion, Eichhorn’s work is a bit more complicated:

Moreover what the workers get up to on their five weeks is, of course, part taxpayer funded. The Chisenhale receives around £165,000 per year from the taxpayer via Arts Council England and this sum accounts for around half the staff’s salaries and building overheads. When this issue was briefly raised at the symposium a representative of the gallery floated an idea the gallery had considered but not adopted which was that, because tax-payers money accounts for only 50 per cent of salary and running costs, that portion could apply more to other exhibitions through the year rather than this one (for example the entire second half of the year’s programme). This reasoning is, of course, creative accounting at its neoliberal best: the gallery’s Arts Council funding is not project-based, it is for the entirety of the three-year funding period.

Tower Hamlets, the borough that the gallery is located in, was rated as the 24th most deprived borough out of 326 areas reported on by the Indices of Deprivation in 2015. Its taxpayers along with the rest of us, are at least part-funding the five-week jolly and in return cannot access the gallery or reach the staff. To what extent those involved with the exhibition are in touch with such concerns is debatable. At one point in the symposium one of the two academics invited to speak exclaimed ‘I’m deeply coming from Foucault when I talk about that!’ and referenced Derrida enthusiastically.

Sadly none of the speakers commented on the fact that a good portion of the rest of the funding for the show comes from a gallery trustee, Shane Akeroyd, who is a senior staff member of Markit, a firm who specialised in the field of credit default swaps among other financial services. Complex world, this neoliberalism. Still, for those who like their gallery visits brief, Maria Eichhorn’s 5 weeks, 25 days, 175 hours runs until 29 May. Don’t miss it!

Yes, at the symposium it became apparent that it was the regular, contracted staff that were being remunerated (we can assume, anyone privileged (/validated) with an @chisenhale.org email address - which of course also does not involve volunteers…)

I actually find Ratnam’s argument misses the point a bit though. It is Chisenhale’s curatorial prerogative to spend their funding (public and/or philanthropy) on a programme that they seem fit. The source of the privately funded money is questionable; but Ratnam seems to think this artwork isn’t “arty” enough. I agree it is much more complicated, it seems ignorant to not see beyond the project as a “five-week jolly”, and also to dismiss any theoretical or art critical underpinning to the work…

As is typical of authoritarian gestures, doesn’t this work have unintended negative consequences in its effect on the other artists that the gallery works with? That is, if the gallery does work with artists over the longer term, rather than just mounting one-off shows. Not made clear. Further lack of reflexivity is shown by the inability to distinguish political considerations from that kind of esthetic outrage that often greets avant-garde art gestures. You know I love this stuff but generally it reminds me, to be dramatic, of Cambodia & what happened to the country after a bunch of hyper-educated intellectuals took charge

Would your really call Maria Eichhorn an authoritarian, though? Comparing her work to the Cambodian genocide is pretty harsh…

Hi Karen respectfully if her gesture – not necessarily her herself – isn’t authoritarian, what is? Did she consult in advance w the employees? Sorry, I don’t know; I may be wrong, as I may be mistaken about the effect of her work on her fellow artists – that whole question isn’t addressed as far as I know. Can you tell the answer? Imagine if e-flux was suspended for a month – the impact would be widespread as you all serve many constituencies. I’m not sure either whether your writer discussed the implicit meaning of the artist’s polemic, i.e. art is unnecessary and won’t be missed if it simply disappears. I like this notion personally, as the nihilism of ending the art profession appeals to me – we could have nothing but folk culture. So I suggest the leap from this goal to various types of Cultural Revolution does not seem so great.