Informatics of Domination: A lecture series organized and introduced by Zach Blas 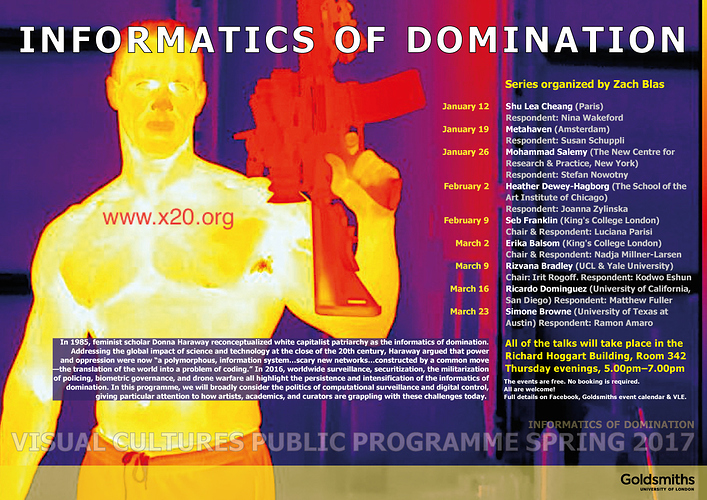 Starting this month and continuing through March, the Department of Visual Cultures at Goldsmiths, University of London presents a weekly lecture series entitled “Informatics of Domination,” organized by artist and writer Zach Blas. e-flux conversations will publish selected lectures from the series. Today we present an extended introduction by Zach Blas. The full lecture schedule is on the flyer above.

A section titled “The Informatics of Domination” sits halfway through Donna Haraway’s 1985 text “A Cyborg Manifesto.” At its start, Haraway gives a name to describe the transformation of power at the close of the twentieth century:

In this attempt at an epistemological and political position, I would like to sketch a picture of possible unity, a picture indebted to socialist and feminist principles of design. The frame for my sketch is set by the extent and importance of rearrangements in world-wide social relations tied to science and technology. I argue for a politics rooted in claims about fundamental changes in the nature of class, race, and gender in an emerging system of world order analogous in its novelty and scope to that created by industrial capitalism; we are living through a movement from an organic, industrial society to a polymorphous, information system—from all work to all play, a deadly game. Simultaneously material and ideological, the dichotomies may be expressed in the following chart of transitions from the comfortable old hierarchical dominations to the scary new networks I have called the informatics of domination. 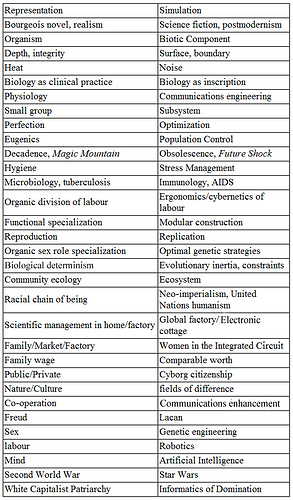 Haraway further clarifies the mode in which the informatics of domination operate: “communications sciences and modern biologies are constructed by a common move—the translation of the world into a problem of coding” (164). This provokes something of a conundrum for minoritarian struggles, as strategies for political liberation have oriented around gaining representation and enabling the subaltern to speak, as well as a range of textual and visual tactics. When humans are transformed into code and brought into an informatic reign, mustn’t political, critical, and aesthetic responses to power necessarily reconfigure? I am reminded of a text by media theorist N. Katherine Hayles titled “Print is Flat, Code is Deep,” in which Hayles argues that the time-honored and honed skills of literary textual analysis, used to critique print works, fall short when considering a work of electronic literature because “the text” is constructed by software, code, and electronics—not print. Hayles defines her scholarly method as “medium-specific analysis,” and it stipulates that the informatic is distinct from the textual—and by inference, the visual. Thus, the challenge Haraway and Hayles present is to do feminist work by attending to the informatic transformations of power, which are specific and material. Resultantly, a flurry of questions and concerns demands confrontation, such as, how is information created and controlled? Theoretical terms like “mediation,” “capture,” and “protocol” are crucial to start formulating responses. Ultimately, opposing the informatics of domination requires a proliferation of informatic counter-vectors—an informatic feminism, an informatic queerness, an informatic antiracism, an informatic aesthetics.

Strikingly, Haraway invests in myth-making and fiction as a means to combat the informatics of domination. For instance, the cyborg is a feminist myth that has the agency to intervene into the political trajectories of networked information technology; it “is the self feminists must code” (163). Notice that Haraway does not state “write” or “paint.” Coding can also generate a resistant informatics that is grounded in social reality and aesthetics. Indeed, it is Haraway’s feminist framing of power and the arts that motivates the Spring 2017 Public Programme of the Department of Visual Cultures at Goldsmiths. By organizing a lecture series around the informatics of domination, I understand this as bringing together scholars, artists, and curators who are committed to investigating, critiquing, and reimagining the informatic dimensions of power and control today, particularly those engaging such issues from feminist, queer, critical race, and minoritarian positions. This approach necessarily leads to the queer science fiction of cyberfeminist Shu Lea Cheang, and also to the pioneering hacktivist work that Ricardo Dominguez continues to develop around electronic disturbance, Mayan technology, and the Science of the Oppressed. Other invited speakers advance the informatics of domination into the realm of twenty-first century urgencies: Heather Dewey-Hagborg uses bio art to explore futures of genetic surveillance; Mohammad Salemy critiques the “post-internet” and paradigms of artificial intelligence; and Rizvana Bradley thinks blackness’ relations to the internet and the digital. Some guests invest in many of Haraway’s initial concerns, by focusing on design, labor, and vision: Metahaven present films and a lecture that unfold the potentialities of “design research”; Seb Franklin traces the transformations of labor wrought by digitality; and Erika Balsom discusses capture and control in late film/video works by Harun Farocki. Still others detail longer histories of informatics and subjugation, such as Simone Browne, in her work on slavery and surveillance.

In 2017, the informatics of domination has only intensified: drone warfare, biometric governmentality, and mass securitization evidence as much. A key question has also intensified: What are the myths, fictions, and artistic practices that join together with social struggles to deliver an informatics without domination?

I am reminded of a text by media theorist N. Katherine Hayles titled “Print is Flat, Code is Deep,” in which Hayles argues that the time-honored and honed skills of literary textual analysis, used to critique print works, fall short when considering a work of electronic literature because “the text” is constructed by software, code, and electronics—not print. Hayles defines her scholarly method as “medium-specific analysis,” and it stipulates that the informatic is distinct from the textual—and by inference, the visual.

This again reminds me of the writings of Vilém Flusser. His essay Die Schrift. Hat Schreiben Zukunft? from 1987 has been translated to english and published at University of Minnesota Press wihtin the “Electronic Mediations” book series in 2011: Does writing have a future? – Introduction by Mark Poster, Translation by Nancy Ann Roth.

Poster begins his introduction stating that “… Flusser remains relatively unknown to readers of critical theory, cultural studies, and media studies, particularly among readers of English.” Later on he continues:

"Like both McLuhan and Jean Baudrillard, Flusser theorized media culture well before many other cultural theorists thought seriously about it. (There are certainly some notable exceptions: Walter Benjamin, Harold Innis, and Hans Magnus Enzensberger come immediately to mind.) Michel Focault, Jacques Lacan, Louis Althusser, Jean-Francois Lyotard, Juergen Habermas, Ernesto Laclau, Homi K. Bhabha, and Judith Butler – the list could be extended considerably of major theorists from the 1970s onward who either paid no attention at all to the vast changes in media culture taking place under their noses or who commented on the media only as a tool that amplified other insitutions like capitalism or representative democracy. Against this group of thinkers Flusser stands out, with only a handful of others, as one who presciently and insightfully deciphered the codes of materiality disseminated under the apparatuses of the media."

The two commentaries below provide some insight in what Flusser deals with in the essay and how it relates to writing, literature, code etc… The book may be found online as pdf or in libraries. Poster’s introduction itself is recommendable, I think.