In Defense of Freedom of Expression at the Aichi Triennale 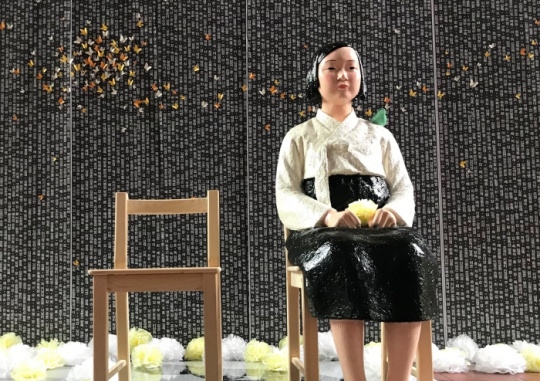 We, the undersigned artists participating in the Aichi Triennale (2019), condemn the decision to close a full section of the exhibition as an unacceptable act of censorship. The section titled “After Freedom of Expression?”, a special project of the Aichi Triennale, was closed indefinitely to the public on August 3 due to political pressure from the State as well as pressure from anonymous sources threatening to take violent and terrorist actions unless the works in question were removed from the exhibition.

As we expressed publicly in a previous letter, we repudiate these threats inciting violence against the staff of the Triennale and the censored art works. However, while we believe that all precautions must be taken to ensure the mental and physical safety of the exhibition staff and the visitors of the Trienniale, we insist that “After Freedom of Expression?” should be opened and remain on view until the scheduled closing of the exhibition.

The main target of the attack in this case is the work “Statue of a Girl of Peace,” by Kim Seo-kyung and Kim Eun-sung: a sculpture that attempts to repair historical memory focusing on Japan’s military sexual slavery (euphemistically called “comfort women”) a historical issue that is continuously repressed in Japan. We consider it an ethical obligation to stand by the exhibiting artists voices and their work being exhibited. Freedom of expression is an unalienable right that needs to be defended independently of any context.

The attacks on freedom include: (1) Nagoya mayor Takashi Kawamura’s unfortunate comments calling for the permanent closure of “After Freedom of Expression?”; (2) a statement made by Chief Cabinet Secretary, Yoshihide Suga, threatening to cut off future funding to the Trienniale through the national Agency for Cultural Affairs; (3) numerous anonymous calls harassing the exhibition staff; (4) a fax threatening terrorist action unless the section be closed.

We believe that the Aichi Triennale organizers’ decision to surrender to irrational threats and political demands violates freedom of expression and we question their decision to close the section “After Freedom of Expression?” without previously discussing it with the participating artists, the other curators, and the organizers of the special exhibition. We fundamentally disagree that this is an issue of “risk management” and not one of censorship, a fact that has been denounced publicly by Amnesty International Japan, AICA Japan, Pen International, as well as local and international press.

As a cultural institution, it is the Aichi Triennale’s responsibility to stand by the rights of its exhibiting artists and to protect freedom of expression. We understand that it is not an easy decision to make when people’s lives and security are at stake. But as a public institution, it is also its responsibility to work in collaboration with the corresponding authorities to provide protection and security for its staff, the visiting public, and anyone involved in the exhibition. It is the authority’s responsibility to undertake a serious and formal investigation as would be standard in the case of any terrorist threat. All these measures should have been taken into account before closing down a section of the exhibition.

In no way do we want to implicate the staff of the Aichi Triennale and its exhibition spaces, with whom we have had a mutually supportive and positive relationship. We thank them for their hard work and stand by them through this difficult time. However, more than a week has passed since “After Freedom of Expression?” was censored. During this time, the organizers have been compliant in organizing an open discussion with the artists and we have insisted on the importance of reopening the exhibition. Also, at least two people have been detained in connection to the terrorist threats. However, we have not been given any clarity as to whether the censored section will be reopened.

Therefore, as a public gesture of solidarity with the censored artists, we demand that the organizers temporarily suspend the exhibition of our artworks in the Trienniale while “After Freedom of Expression?” remains closed to the public.

Through this action we sincerely hope that the organizers of the Aichi Triennale will re-open the section “After Freedom of Expression?” and continue with their valuable work without thwarting freedom of expression by giving way to political intervention and violence.

Image: Statue of a Girl of Peace, Kim Seo-kyung and Kim Eun-sung. Via Kyunghyang Shinmun.