In an act of solidarity with the many asylum seekers who have fled from war-torn Syria, Iraq, and Afghanistan, Humboldt Universität in Berlin is opening its classes to refugees, inviting them to register as guest students. The university writes:

This coming winter semester, Humboldt-Universität zu Berlin invites refugees to listen in on lectures or seminars as guest students. Become acquainted with Germany’s higher education system, experience university life and be a member of the Humboldt community.

Here’s an excerpt of an Al Jazeera article detailing the refugee crisis in Berlin:

Throughout their journey from Syria to Europe, Ahmed Khuzami and his little brother Abdul-Rahman viewed Germany’s capital as the shining light at the end of the tunnel.

As they crossed the Aegean Sea from Turkey to Greece on a dangerously overcrowded rubber boat and as they sprinted across fenced borders in Macedonia and Serbia and hid in dense forests to avoid Hungarian police, 19-year-old Ahmed and baby-faced Abdul-Rahman, 14, always focused on the plan to reunite in Berlin with their older brother Sayf and have a chance to live a normal life again.

They finally arrived in Berlin two weeks ago and reunited with Sayf, 21, who fled Syria for Germany a year earlier. But even though they had reached the heart of Europe’s wealthiest country, Ahmed and Abdul-Rahman are still experiencing the same overwhelming and sometimes unwelcoming atmosphere tens of thousands of other refugees have seen this summer — in Italy, Greece, the Balkans and other European destinations deeper into the continent.

“Everybody said Germany is freedom,” Ahmed said, “But the system here is very bad. We are waiting for 12 days. It’s frustrating.”

Ahmed and Abdul-Rahman spoke to Al Jazeera while waiting in a chaotic, seemingly endless line in front of the offices of the Berlin State Office of Health and Welfare, the authority responsible for registering asylum seekers. With them in line were hundreds of other recent arrivals, mostly from Syria, including large families with children.

These newcomers to Europe are part of an unprecedented number of refugees fleeing to the continent (107,500 entered in July alone), with most coming from war-torn countries like Syria, Iraq and Afghanistan. Throughout the refugee crisis, which began in 2012 and has intensified with every passing year, Germany has received the most asylum applications by far. Last week the German government announced it is expecting to register 800,000 asylum applications in 2015 — quadruple the number of applications processed last year.

Germany’s Federal Office for Migration and Refugees has added 650 staff members in the past year, and supplementary budgets to deal with the increase were recently approved on a national level by the German government and on a state level by the Berlin Senate, enabling 1,000 additional new staff members to be hired in the coming months.

Nevertheless, with every passing day, the line at the Health and Welfare office keeps getting longer.

“Every application takes a long time to be registered,” said Silvia Kostner, a Health and Welfare spokeswoman. “We have 50 people in our staff, and we try to register about 100 to 150 people a day, so all the others have to wait until we have a solution for them.”

She explained that Berlin in particular is overwhelmed with asylum applications. As of Aug. 20, Berlin has registered 19,000 refugees this year — already more than 2013 and 2014 combined.

The federal state of Berlin is legally obliged to accommodate only 5 percent of Germany’s asylum seekers, according to a law that stipulates asylum applicants should be divided among the 16 states, on the basis of population. However, according to Kostner, about 15 percent of those seeking protection in Germany apply for asylum in Berlin, so many will have to be assigned to other states.

This is nice. However it does not address the root cause of the refugee crisis in Europe. Nobody wants to be a refugee. We all know most refugees leave their homes either because of war or as a result of political instability and persecution. Most European refugees are victims of wars perpetrated by USA, Nato and their demented allies in the mid east and Africa. If we are sincere in our desire to help, in addition to charity, we all have the political responsibility to press our democratically elected governments to chose peace over war. We need to ask our leaders to stop funding/supporting the conflict in Syria and stop perpetrating regime changes like Libya or interfere militarily in Africa.

I think so, too. But it’s not merely “nice”. As citizens I’m afraid most of us are neither socially or politically engaged (incl. me). I assume that’s something that went awry in the past decades and hasn’t always been that widespread or thorough. Taking up responsibility on a local basis is, as I see it, a necessary first step - also regarding the latest acts of violence against refugees in Germany and other European countries. I don’t want to romanticize, but maybe it’s true that, when governments “fail”, civil society has to emerge from its inactivity. This refers as well to using democratic tools to voice our opinions and put pressure on represantatives (if that’s a term that still holds any value at all). Most of us I’d say have to relearn that.

The sheer need of masses of refugees finally making it into european countries is something that people (we or most of us) obviously need to be affected by and reach an understanding of the crises. Crises that come to some of us only through media. This I see as a problem of mediated information being too abstract and detached from daily life, not mainly as a critique of people being ignorant. It would be desirable to find a way to rethink the way of preparing or disseminating information so that it’s actually meeting its goal of making us aware and act upon it (supposedly in a way that is more intelligible than what art does). Because as of now, “we” haven’t found a way to cope and hence remain paralyzed - or “we” don’t even really care.

On the other hand the University’s action as seen through the media (apart from it’s actual benefit) may be a clear and unambiguous message, so that it encourages people to not shy away and to act, according to their potentials or possibilities. In a further step then hopefully also to make use of political tools. This is not a radical approach, which may be needed (radical more like fundamental, profound, essential). But in a hypercomplex, socio-political fatigued society, perhaps a way to do it is one step after the other, to then gain momentum. (…Time’s pressing…) 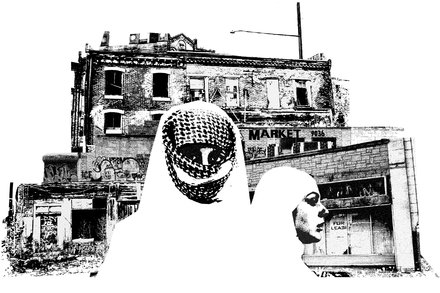 Refugees can revitalize the city, which has a large Arab community.