How to live without irony 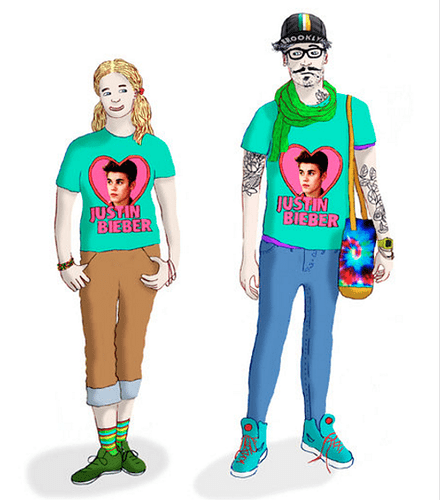 An oldie-but-goodie, here’s Christy Wampole on irony, its inveterate hipster manifestation, and how to leave it behind. Given that the essay was written in 2012, I wonder how it holds up against recent conversations about corporate aesthetics. The essay in partial below, in full via the New York Times.

If irony is the ethos of our age — and it is — then the hipster is our archetype of ironic living.

The hipster haunts every city street and university town. Manifesting a nostalgia for times he never lived himself, this contemporary urban harlequin appropriates outmoded fashions (the mustache, the tiny shorts), mechanisms (fixed-gear bicycles, portable record players) and hobbies (home brewing, playing trombone). He harvests awkwardness and self-consciousness. Before he makes any choice, he has proceeded through several stages of self-scrutiny. The hipster is a scholar of social forms, a student of cool. He studies relentlessly, foraging for what has yet to be found by the mainstream. He is a walking citation; his clothes refer to much more than themselves. He tries to negotiate the age-old problem of individuality, not with concepts, but with material things.

He is an easy target for mockery. However, scoffing at the hipster is only a diluted form of his own affliction. He is merely a symptom and the most extreme manifestation of ironic living. For many Americans born in the 1980s and 1990s — members of Generation Y, or Millennials — particularly middle-class Caucasians, irony is the primary mode with which daily life is dealt. One need only dwell in public space, virtual or concrete, to see how pervasive this phenomenon has become. Advertising, politics, fashion, television: almost every category of contemporary reality exhibits this will to irony.

Take, for example, an ad that calls itself an ad, makes fun of its own format, and attempts to lure its target market to laugh at and with it. It pre-emptively acknowledges its own failure to accomplish anything meaningful. No attack can be set against it, as it has already conquered itself. The ironic frame functions as a shield against criticism. The same goes for ironic living. Irony is the most self-defensive mode, as it allows a person to dodge responsibility for his or her choices, aesthetic and otherwise. To live ironically is to hide in public. It is flagrantly indirect, a form of subterfuge, which means etymologically to “secretly flee” (subter + fuge). Somehow, directness has become unbearable to us.

How did this happen? It stems in part from the belief that this generation has little to offer in terms of culture, that everything has already been done, or that serious commitment to any belief will eventually be subsumed by an opposing belief, rendering the first laughable at best and contemptible at worst. This kind of defensive living works as a pre-emptive surrender and takes the form of reaction rather than action.

Life in the Internet age has undoubtedly helped a certain ironic sensibility to flourish. An ethos can be disseminated quickly and widely through this medium. Our incapacity to deal with the things at hand is evident in our use of, and increasing reliance on, digital technology. Prioritizing what is remote over what is immediate, the virtual over the actual, we are absorbed in the public and private sphere by the little devices that take us elsewhere.

Furthermore, the nostalgia cycles have become so short that we even try to inject the present moment with sentimentality, for example, by using certain digital filters to “pre-wash” photos with an aura of historicity. Nostalgia needs time. One cannot accelerate meaningful remembrance.

While we have gained some skill sets (multitasking, technological savvy), other skills have suffered: the art of conversation, the art of looking at people, the art of being seen, the art of being present. Our conduct is no longer governed by subtlety, finesse, grace and attention, all qualities more esteemed in earlier decades. Inwardness and narcissism now hold sway.