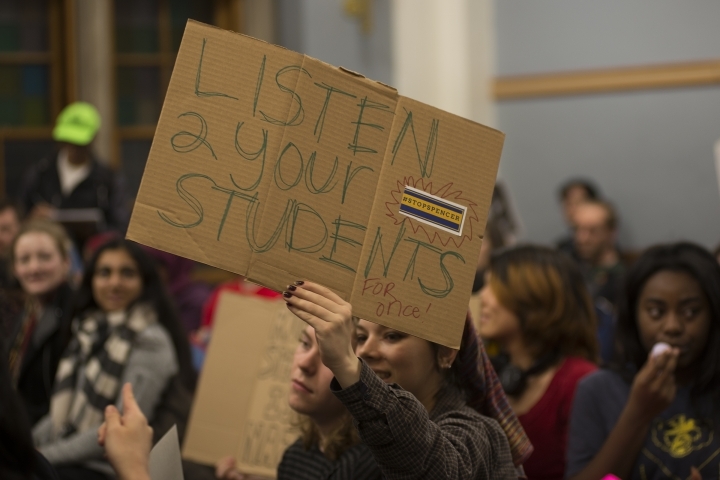 At the Baffler website, Maximillian Alvarez examines how the neoliberalization of universities in recent decades has made them vulnerable to the racist machinations of new-right ideologues like Richard Spencer. Spencer has sought to spread his white-supremacist ideas by delivering speeches at public universities throughout the US. With a few notable exceptions, these universities have allowed Spencer to speak, citing free-speech protections. But as Alvarez argues, these decisions have less to do with free speech than they do with the fact that modern universities operate more like corporations than public, democratic institutions. Here’s an excerpt from the piece:

The neoliberal university is an administrative apparatus whose morality is outsourced to the market. As such, its capacity to administer is dictated by the outside forces on which it depends: by donors and investors, by corporate sponsors, by public perception, by media coverage, by national and global ranking systems, by lawmakers who are themselves beholden to external interests, etc. When the mission of a university becomes a function of this administrative network, even the most well-intentioned and democratically minded administrators are pushed, by necessity, to adopt decision-making logics and practices that are dangerously undemocratic.

It is precisely for this reason that reactionaries have come to understand that they can censor the academic freedom of professors they don’t like if they can just stir up the one thing that universities can’t afford: bad publicity. It is for this reason that administrators remain stubbornly, laughably incapable of seeing that white nationalists like Spencer are not just “visiting” campuses, but participating in a much larger effort to take over and redefine academic spaces in their own image. (Read, for instance, the University of Virginia administration’s botched efforts to prepare for the Unite the Right rally, which include UVA President Teresa A. Sullivan claiming in advance of the event, “Of course we anticipate that some of them [i.e. the brigade of alt-righters, neo-Nazis, etc.] will be interested merely in seeing Mr. Jefferson’s architecture and Lawn.”) And it’s also for this reason that universities will ignore the voices of their students and their communities and sacrifice their safety by defending an interpretation of free speech whose terms have been set by those who have the power and privilege to believe that their subjective view of “open inquiry” is all that’s at stake.