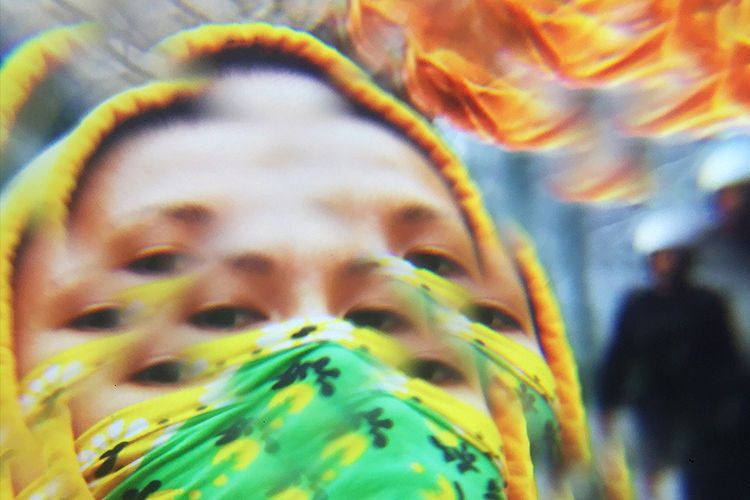 In the summer issue of Commune magazine, critical theorist and psychedelics scholar Emma Stamm explores how Mark Fisher’s notion of “acid communism” – the title of a book he was working on when he died – has been taken up and expanded by activists, fellow scholars, and cultural producers. As Stamm writes, “‘acid communism’ represents the idea that psychologically profound experiences – including the use of psychedelic drugs – should be used to galvanize anticapitalist movements.” Fisher thought that psychedelic culture could help revive a collective imagination that has been appropriated and strangled by neoliberal capitalism. Stamm shows how acid communism has animated a surprising diversity of recent cultural and political projects, from conferences and music festivals to radical scholarship and activist groups. Check out an excerpt below.

In the wake of Fisher’s suicide, several activist initiatives took up the Acid Communist banner. The 2018 transmediale festival, an annual arts and culture event in Berlin, included a workshop called “Building Acid Communism.” Workshop leaders gave the audience a series of prompts aimed at “unveiling and exploring the precise idea of freedom” that motivated left-wing activists. These questions inquired into how participants experienced boredom, whether fashion and style mattered to their political identity, and the last time they felt truly free from work, among other issues. Meanwhile, a spate of recent articles about Acid Communism reflect the multiple ways it might be interpreted. In one editorial, Jeremy Gilbert points out that the concept has taken on other names, including “freak left,” “psychedelic socialism,” and in the UK, “Acid Corbynism.” Acid Corbynism is referenced in the title for Gilbert’s new podcast, #ACFM (Acid Corbynism FM), which investigates “the links between Left-wing politics and culture, music and experiences of collective joy.” Although they are eclectic, these endeavors agree that the psychedelic sixties might make a reappearance in the political future. The work of Acid Communism, it seems, is just beginning.

…but the work of capitalist subversion, and turning people on to drugs, rather than genuine revolutionary politics never stops.
Mark Fisher (I knew him) and the CPGB Weekly Worker he was part of spent and spend all their time “turning people on” to hatred of the Soviet Union as “worse than fascism”. Fisher was an anti-communist and not a communist. Revisionist though the leadership of the USSR was after Lenin’s death, the USSR was a workers state, a dictatorship of the proletariat with huge socialist achievements to its credit, including the Red Army’s defeat of fascism in WW2. Gorbachevism was “loved up” on the “magic of the capitalist marketplace” and it brought nothing but mass destitution, oligarch rule, crime and foul capitalist restoration.
That Fisher should be associated with the attempted revival of the bending of people’s brains into “Acid Anti-communism” (think how drugs were pumped into the Sixties anti-Vietnam War movement and the role of all the California drug gurus) is a fitting epitaph for him.
Read Richard Cottrell’s book “Gladio - Nato’s Dagger at the Heart of Europe” to have a better understanding of what the CIA gets up to and its dirty role in this area.
And read Lenin and Marx to “expand your mind”, NOT Burroughs, Leary, Lobsang Rampa or Carlos Castaneda, for heaven’s sake.
If “acid enlightenment” makes you think that Corbyn is going to lead the way to socialism - rather than just being a typical fake “left” Labourite parliamentary charlatan - you must be having a bad trip, maaaaannnn……

Was MF really in the CPGB? Are you sure? I don’t think he was. If so, not for long. When he died he was in Plan C, a communist anarchist collective. When did he say the Soviet Union was worse then fascism?

This notion of yours that to be a true communist one must deny the fundamental corruption of Marxism in the actually existing attempts at communism in the Soviet Union and China is ridiculous. The state merely replaced the private networks of capitalists in terms of worker exploitation (expropriation of surplus value), material distribution was socialised through planning but clearly at the expense of freedom, bureaucratic abuse and a limitation of horizons - the expansive notion of meeting the full potential of human species-being which underlay all Marx’s ideas could not have been achieved under those systems, and we see how easily China has reversed into the worse form of neoliberal capitalism (and state, and imperialism). Mark’s idea of Acid Communism was an attempt to find a prospective optimism about how social and material conditions can interact with ideas, the mind and conceptions of reality which might break the impasse of capitalist realism. It was an attempt to reckon with the failures of Leninist Communism, of trade unionism, of social democracy, or various waves of anarchism, to transcend the traps that dwelling on these appear to pull us into, while recognising that Acid 1968ism was co-opted by capitalism (as you infer), and indeed was not radical enough by half (and arguably a mere elite youth movement in many respects).

My perspective as a Leninist is that notwithstanding any problems the USSR had (set against its vast achievements), that ending capitalism requires the rule of the monopoly-capitalist ruling class to be defeated by the socialist revolution. To prevent counter-revolution, there is no choice but the party-led dictatorship of the proletariat and the use of workers state force (secret police, Red Army etc). I think any talk of avoiding this is fooling itself, given the history of criminal fascist mass murder and torture that Western imperialism unleashes against all and any progress towards socialism.
Lenin is very clear on this - and Marx and Engels. First the socialist revolution, then its spread, then its consolidation globally, then the withering away of the state, then full human freedom.
So for China - I am on the side of the 1949 Revolution, despite its revisionist leadership’s weaknesses. Are you suggesting, Abrakar, that the violent mobs in Hong Kong waving the Union Jack of British imperialism and parading to the US consulate demanding imperialism’s intervention in HK are progressive? They are for “freedom and democracy” - the watchwords of the CIA and all counter-revolution - and are taking the ideological side of the US Empire.

ChrisBarratt - No, I’m not arguing the the HK crowds are progressive. From my limited knowledge they appear anything but. Broadly, I agree that AEC did more good than bad, and that there is lots of false revisionist history going on. But, clearly these were not social systems with the drive and ability to reproduce, compared to capitalism. Had the revolution in Germany worked, history may well have gone very differently. But as it is, we had Stalin, the third world peasant movement, forced bureaucratic industrialisation (instead of that forced by the commodity-value form as under capitalist globalisation), and I think now we do have to acknowledge the AEC doesn’t offer a particularly appealing horizon for the future. AC is all about trying to create a new one, is all. Anyway, there have been some interesting and legitimate challenges to AC, and the article linked above here: https://cosmonaut.blog/2019/08/01/more-acid-than-communism/

More “acid” than it is communist sounds about right. But you will see from my many other posts on the history of the 20th century and the USSR and China that I strongly dispute any notion that the USSR’s socialism “went the wrong way”. Given the forced pace of events, the USSR under Stalin (for all the mistakes) made huge strides towards socialism (before being liquidated by Gorbachevism, which was the logical end-point of Stalin’s retreats from Leninist revolutionary understanding). China’s planned economy combined with its (over-use) of Lenin’s NEP-type engagement with capitalism is also developing this vast country, lifting hundreds of millions out of poverty. World capitalism is doomed to slump, war and fascism and will disgrace itself utterly as a system. The parliamentary democracy systems of lying and expense-fiddling MPs and representatives are destined to be held in complete contempt by the masses.
It is fear of the rising of the masses that is seeing so much talk about the need to legalise drugs, especially from the parliamentary cretins. But we shall see who will get really stoned in the end.

Any relationship of ex-social democrat charlatans like Lenin and Trotsky to any kind of communism is yet to be proven. Some other capitalist crackheads also pretend to theorize about coming of post-scarcity thanks to technological development and globalization. It’s not writing fanfiction of about future end of history that makes someone a communist.

Even the slightest knowledge of history shows that Lenin led the Soviet socialist revolution and state. Ozgurkoc’s dismissal of this seems wildly out of touch with reality. Trotsky was a renegade from the USSR and was exiled by Stalin, who didn’t take his responsibility for quelling Trotsky’s Orwellian politics seriously enough.
But back to drugs: apart from acid for the kidz, the West is now getting fried by its opioid pandemic, created by Big Pharma, which is killing tens of thousands. Is this the sign of a healthy society, I ask you??