Such a record number of people visited the Tate Modern last June that the museum removed the two Brazilian macaws included in Hélio Oiticica’s installation fearing that the animals’ health may be at risk. In another testament to art museum popularity, the Metropolitan Museum of Art clocked over 6.7 million visitors in 2016. And within the art market, according to the Dublin-based organization Arts Economics, total global art sales reached 63.8 billion USD in 2015. Add to this both the remarkable explosion of museums in China and the desire by countries such as Abu Dhabi and Dubai to obtain institutional art brands such as the Louvre and Guggenheim, and ask yourself whether one can really claim straight-faced—as Jonathan Jones has—that a call for American artists to strike on inauguration day is “nostalgic” and “futile”?

Yes, shutting down reality television programming would undoubtedly affect more people than an art strike, as Jones suggests—who could disagree with that? And yet, by simply running the numbers we can see the potential power of high culture. One need not be familiar with sociologist Pierre Bourdieu’s studies linking actual power with accumulated cultural and social capital, including art collecting, to grasp the ideological authority of art. The president elect’s inaugural planners have recently stirred controversy by seeking to borrow from the St. Louis Art Museum an oil painting by George Caleb Bingham entitled “Verdict of the People.” The work depicts the reading of election results in mid-19th century America and will become the backdrop to the new president’s luncheon following his swearing-in ceremony if a petition rejecting the loan now underway does not succeed. (See Hrag Vartanian’s report via Hyperallergic here.)

Just as important as the impact of art is artists’ grassroots organizing that accomplishes political and social justice. Such mobilization has the ability to generate discussion as much as disagreement, and it frequently leads to longer-term coalition building. Neither is such activism merely the parroting of 1960s cultural protests as Jones insists. Even a cursory reflection on the tactics of activist artist coalitions such as the Guerrilla Girls (1985–ongoing), Gran Fury (1988–1995), A Day Without Art/Visual AIDS (1989–ongoing), Liberate Tate, and Gulf Labor Coalition (2010–ongoing), offers evidence that artists’ groups have continuously formed over the decades, and that they have often used cultural boycotts to amplify their objectives. Curiously, in a different Guardian piece, Jones acknowledges that the history of politically engaged art reaches back at least a century when he describes a Royal Academy exhibition featuring revolutionary Russian art as one of the great and “unmissable” cultural events of 2017. Nor is “art strike” the only such organization of culture that has taken place since the election, more examples of which can be found here.

Finally, it is simply not true that the signatories of the initial call for an art strike are “well-heeled” members of the “cultural elite.” Writing as one of the signatories, but also as a long-term art activist, I feel Mr. Jones’s description of the January 20th art strike as “shallow radical posturing,” is either poorly researched or intentionally hyperbolic, and frankly defeatist. If art is as minor and ineffectual as he suggests, and if orchestrating solidarity is as insignificant as he proposes, perhaps he is laboring at the wrong profession.

*Top image: Russians queue for hours in freezing weather to visit the Valentin Serov exhibition at the Tretyakov Gallery in Moscow, on January 22, 2016 (AFP Photo/Vasily Maximov via Yahoo)

Thanks to Greg for this sharp critique of Jones’ rather pompous and self-satisfied piece.

As a fellow signatory of the J20 call, I’d only add this: what on earth could it mean to have a ‘strike’ of reality TV? It’s not live, it’s pre-recorded and carefully edited to create the repetitive meaning of each episode. Refusing to record reality TV on J20 would not show up for months. If technicians refused to load the master tapes for cable transmission, executives or scab labor would do it. To have screens go blank you’d need all cable distributors to be on shutdown.

I recognize the tactic: UK cultural elitists like to pose as anti-elitists not because they care one whit about the popular investment in an issue but to claim rank within the cultural elite.

The point of J20, like the MayDay general strike called by Occupy Wall Street in 2012 is not to shut down every outlet or workplace but to pose the question: are you really going to treat this transition to fascism as just another day? Do you really think that having a museum show open matters more than refusing to comply with the normalization of authoritarianism?

The _Guardian_has become a trashy blog trolling for subscriptions. J20 is the beginning of a refusal to be governed, the start of becoming ungovernable.

well said but what wil follow on the J21?

Hi Greg-- your response doesn’t address the concerns that a lot of people such as myself have (quite different from Jones’s). Artists are self-employed, a lot of critics work from home, and most professors are still on winter break. Yet you’re calling on people with 9-to-5 jobs not to go to work that day, with no mention of a strike fund (to which signatories could contribute) to offer financial support to workers who risk losing wages that day.

I wonder if this symbolic gesture (no related action is mentioned) might have been better accomplished if organizers had approached museum administrators to come up with a plan, which administrators could have then communicated to their staffs. I realize that’s not the same as a strike. But as things stand now, I don’t see how this petition is going to move beyond the privileged groups it’s currently circling among.

I think your point is well taken Nikki, and also equally important is the need to create solidarity, right now, in an immediate timeframe, right across the very class-diverse art world that we all inhabit, necessary that is if we are to develop more sustained action, of which Art Strike is, I agree, only a first, and perhaps somewhat hastily organized gesture. With that in mind, please don’t forget that until Brexit most of us thought it impossible for the person who will be president to be ever be elected, and many continued to dismiss this possibility right up to election night. Still, I would come back to this point you raise in a year, or two, or even three to see if a sustained opposition has been able to take root, not that this gesture will do that by itself, but as one of many forms of “everyday resistance” hopefully we add to that growing refusal to allow the coming administration to be normalized. On a personal note, I have an exhibition that just went up here in NYC. Its only on view for a few weeks and the gallery is only open Thurs-Sunday. But I will close it for J20. No, I don’t expect to lose sales since I seldom sell artwork anyway (and your right, as an academic I am on break), however, we deal with symbolism as much as material all the time, us artists, and therefore we should not easily dismiss a moment of resistance, however makeshift it may be in structure. (Though lets not let the organizers of Art Strike off easy if this leads nowhere…)

To echo Nikki, I’ve also thought about how #J20 relates to my own subject position and work, namely as a liberal American freelancing and living in Berlin. What do I do that day? How do I show solidarity? I know if I were in New York that I’d be heading to DC to march. But what’s a displaced American–or anyone not in America–supposed to do? This isn’t to suggest that the J20 plan is flawed, just that so many of us are aching for a way to be involved that doesn’t seem clear to us yet. What is the right way forward? How do we unify without homogenizing the left, which would leave behind the more precarious and intersectional identities comprising it?

I also must say that the left spends an inordinate amount of time determining the most fastidiously ethical course of action–that is our blessing and our curse. On the right, there’s a tendency toward political action that has the most impact and shock value. I don’t want to aggrandize this tactic because it seems tantamount to political trolling, but it is, unfortunately, effective. Just as how Obama without fail plays “the bigger person” deflecting Trump’s salacious attacks, and Clinton has apparently taken a vow of dignified silence, I can’t help but feel like a.) the preexisting tools of the left are today ineffective, if broken, and b.) creating some sort of unified approach that meets the ethical standards of the left is going to be very difficult, and hopefully not impossible. I feel like Trump/Tea Party types have the upper hand having no ethical standards or responsibility toward truth, and with a Republican Congress and Trump as President things look quite bleak from my vantage.

The question of longer-range organizing is very important. Hot energy also tends to burn out fast. We need the outrage, and there is lot of that right now, but will it find a sustainable form? Perhaps the clearest model that I know of for imagining a broad, arts-related response to bad government policies is Artists Call- Against U.S. Intervention in Latin America from 1984 that brought a wide cross-section of the NY art world (and beyond) together around opposition to Reagan’s funding of the Contras, and posturing of military action against revolutionary movements in El Salvador, Nicaragua and Honduras. Not-for-profit spaces as well as a few commercial galleries, as well as well-known artists and not so well known artists, developed exhibitions, performances and teach-ins around the topic. A poster designed by Claus Oldenberg helped to tie it all together. Here is a piece by Lucy Lippard who was one of the organizers about that project: [ARTIST CALL] (https://nacla.org/article/artist-call-against-us-intervention). More images can be found on Doug Ashford’s website. 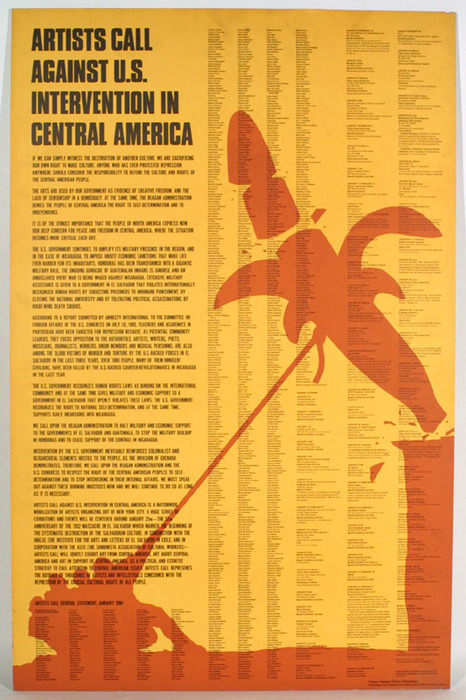 However, there are two important caveats here:

First, Artists Call’s organizing focused on a specific concern - the possibly even likely use of armed intervention by the United States in Central America (which also has a long history).

Second, it followed upon months of previous organizing by activists including Liberation Theologists involved in the “Sanctuary Movement.”

In other words, artists were able to build upon the work of a broader political coalition in order to create a solidarity action within their own sphere. And they did so around a pivotal issue, that was linked to other issues including immigration, racism, social economic justice and so forth. My personal sense is beyond the immediate outrage including Art Strike and the J20 activism, we must begin organizing carefully and slowly with eyes wide-open towards that pivotal policy move by the new administration that will galvanize us and serve as an umbrella for what is now a somewhat dispersed, even generalized sense of refusal and anger. But key is having the mechanism in place to act in that almost certainly near-future moment by starting to build a networking mechanism in the present. - g

On the whole a good strike action would be to stop reading Jones trashy ‘thought’. If one could sink to petioning it would be grat if one could get the G to stop using him, he also writes for auction house mags and that ia about his level.

That would be amazing, but unfortunately Jones gets both populist reads and hate/outrage reads, which means he probably gets more traffic than just about any other newspaper critic. I can’t imagine the Guardian throwing away that kind of ad revenue, even if he is a deplorable critic.