Frieze Art Fair: the monetization of your misery? 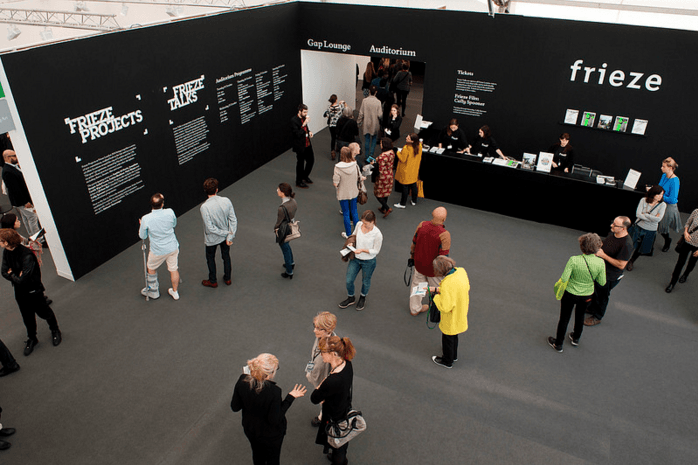 Commercial ventures whose success depends upon the generation of money, art fairs exist to sell art. They're not venues for exciting site-specific projects, spaces in which radical ideas can be exchanged, or interstitial zones where the everyday is overturned and the perennial passive spectator 'activated'. At least, that's how it used to be.

But at this year’s Frieze art fair in London a programmed talk titled ‘Off Centre: Can Artists Still Afford to Live in London’ tipped the uneasy balance between finance and art to a position that felt entirely more exploitative, offensive and grotesque. Put simply, the instrumentalisation and commodification of hardship took things a step too far.

Can artists still afford to live in London? Of course not, nobody can. What made this public exercise even more absurd was the notion that a trade fair costing just under £40 (approximately $62) to enter, with an additional £5 (approximately $8) cloakroom charge for anyone carrying anything more substantial than a clutch bag or an iPhone, was the right place to do it.

Usually this kind of activity – the yoking of neoliberal capitalism and contemporary art of which Frieze represents a kind of summit – is dismissed with specious arguments, ‘it’s all part of the game’ eye-rolls and shrugs of resignation. But is it time to say enough is enough? 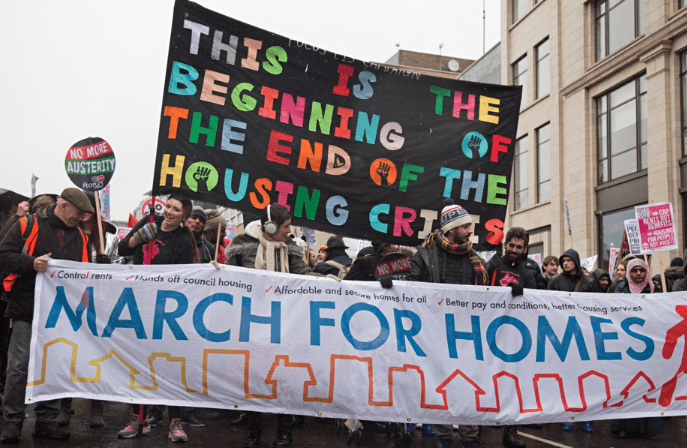 The difference now is that London is dying. It is a city being bled dry by David Cameron’s Conservative government for the benefit of moneyed elites, the same moneyed elites who push wealth between themselves under florescent bulbs inside Frieze’s stale, airless tent.

Of course, people are free to pursue and make money, there’s nothing inherently wrong with that. But is there something morally and fundamentally wrong about using critical engagement with politics, culture, society and economic hardship (i.e. the content of contemporary art since the 1960s) to provide trade fairs with that added bit of ‘cultural capital’ so that money moves around easily? Is there something base about using the human fallout that comes from the pursuit of capital to excuse and make the pursuit of capital more attractive?

Many have voiced contempt for what this public talk has foregrounded, but surprisingly, in the past few days, I’ve come across artists and arts professionals who have explained away the patronage and exploitation ‘Can Artists Still Afford…’ represented, with a jaded, ‘worldly’ fatalism. They seem unfazed by the fact Frieze might have a part to play (however marginal) in the transformation of London from a multicultural metropolis to a landscape of high rise buildings containing empty ‘luxury flats’.

Again, the human fallout from these alterations and the relentless spread of alienating neoliberal practices throughout the capital are what makes this all difficult to stomach. But the fact that it is easy for others to swallow makes me think that there are, at present, two consciousnesses operating in the British art world: one that is happy to ignore the art world’s possible complicity with the wretched socio-cultural, economic and political state of things and another that finds it distressing, disturbing and debilitating to do so. What do you think?

Is it time to walk away from Frieze?

Have you ever felt conflicted or compromised by capital? Was it okay because ‘all money is dirty’ and you ‘need to eat’?

Are you ‘confused and disappointed’ that Tania Bruguera’s only appearance in London was at a commercial fair?

Can you afford to live in London?

Can you afford to live?

Thanks for this well-articulated response! To be honest, when I first saw this talk alongside Metahaven, Emily Segal and Vivienne Westwood, I decided to mentally shelve that information for a while because if one were to get too upset and bewildered by all the "wtf"s of the contemporary art world, one’s mental condition would very quickly deteriorate. I take it that this kind of reaction might be more along the lines of the uffff-knee-jerk-responses that you outline above and that lead to nothing but further normalization of what should be considered enragingly outrageous… Instead, we (people with repressed wages who contribute to the cultural capital that then gets cashed in elsewhere without even so much as a thank you postcard and a dainty flower) tend to see “that world” as “really far away” to have any formative consequences for our demands. It’s probably as much about changing the latter attitude as it is about telling Frieze people to calm down (or “walking away” which is a bit akin to leaving a party which is oblivious to you even being on the guest-list). There is this really great sentence in an intro to a series of lectures by Virno, that today we are a class without a struggle, so perhaps the sheer ridiculousness of contemporary art world’s modi operandi should finally help us articulate that struggle, and hopefully the articulation is finally “loud” enough for it to not just be funelled into becoming another headline for a frieze event. Or at least, there could be a donations box for the struggling London artists where one could throw in some change. Anything for structural change…

The article kind of misses the point. There is no connection whatsoever between Frieze
and rental prices, apart from being in the same economic climate. And
the artist-led scene is just as non-transparent and cliquey as the
commercial sector. It is easy to see why
artists are fed up with Frieze and the likes, but generally, they are
totally unaffected by it. It is a different universe, that few have the
opportunity to enter. You and me, and everyone else in the arts, have
zero chance to ever make it into Frieze, unless Mr White Cube and his
minions decide you are in there. Frieze does not cause artists to be
poor. It causes people to make a shedload of cash from art. Just not my
art. Most “exiting site-specific projects” are just as elitist, if not
more so than Frieze, and the “radical ideas” are not exactly supported
by the artist led scene either. “And why behold you the speck that is in
your brother’s eye, but consider not the beam that is in your own eye?”

I commented multiple times on the Facebook event and the conversation really took off on that platform unlike here. Mr. Quaintance makes some good points about the history of art fairs and their contemporary state which is increasingly heading into the blurry area of the public/private sphere - an alarming state. This is the real problem and certainly a concern for artists - to say it has no connection with the rental prices misses the point of the clear direction towards privatisation of cultural capital. It does actually raise the rents and further “eliticises” public art.
My main critique was towards the curators and their total failure of producing any sort of valuable event. What reason would they have to make the most common conversation amongst London artists in dirty pubs the topic of a debate at Frieze? This is a topic with a clear answer and there is nothing to discuss. Of course nobody can afford to live in London and it is becoming clear that those who remain are either there temporarily until their funds run out, thinking of moving out, or already within established circles.
The topic was co-curated by Gregory Muir from the ICA - in the conversation he decided to include the artist currently exhibiting at the ICA, a poor choice curatorially. It shows the market and publicity influence that Frieze has in these events and the fact that the conversation is nothing but the guise of an advertisement. It is also concerning that topics that are real to artists who are struggling are abused by powerful institutions to gain hype factor and visitors for their event, capitalising on stereotypes and romanticisations of the figure of the artist. This event was not aimed at those struggling to live in London and did not invite anyone in this situation to speak at it. It was a mockery of anyone in these circumstances. Struggling artists were left to imagine a group of wealthy collectors gathered at the event precisely to laugh at their misery.
But Mr. Quaintance - people in fact can afford to live in London, that’s the problem. People will always be able to afford to attend Frieze, but this highlights the growing inequality and the corruption in contemporary culture that masquerades economy with culture, popularity with radicality, and the further spiral into total capital with platforms for discussion and change - a total heist and hijacking of the public sphere.
Frieze must now be defined as a Gesamtkunstwerk performance-installation of sucking-it-up to huge galleries as they decorate themselves with young “project spaces” on the side and critical views which they will soon bankrupt and irradicate with fees and entry marking their disguised monopolisation of the art market. Art is always one step ahead of society; and the future looks bleak.

Is it time to walk away from Frieze?

The only thing I can say is that I have waked away from it. This year a friend of mine that was coming to London for the “Frieze week” asked me if I wanted to join her. I said, I’m fed up of going to the fair, seeing always the same people, the same galleries, the same artists and almost the same kind of art. I’m done with it. She was a bit shocked, me an artist that doesn’t want to go to THE art fair.

I didn’t explain in details because it was her fist time going and didn’t want to spoil what could be a nice experience for her, but my main reason is that: I’m tired of going to these art fairs and feeling very depressed once I leave the place. The whole thing is just an insult to artists that are just trying to make a living.

Yes, I think these art fairs that charge a lot for the entrance and make the art work prices rocket, do help other artists getting poorer. By allowing price to be the “stamp” of good art and therefore the measure of a successful art career is to stop emerging artist that have no connections with this money world to live in oblivion, maybe forever!

Is it cynical of me to wonder whether these Frieze presentations offer a guided tour of areas of investment for the disgustingly wealthy? Let Frieze inform you of these dwindling artistic communities in London that are being cleared out due to gentrification so that our super rich patrons who think nothing of spending a fiver at a coat check can speculate in those localities before prices sky rocket. Is that really cynical of me?