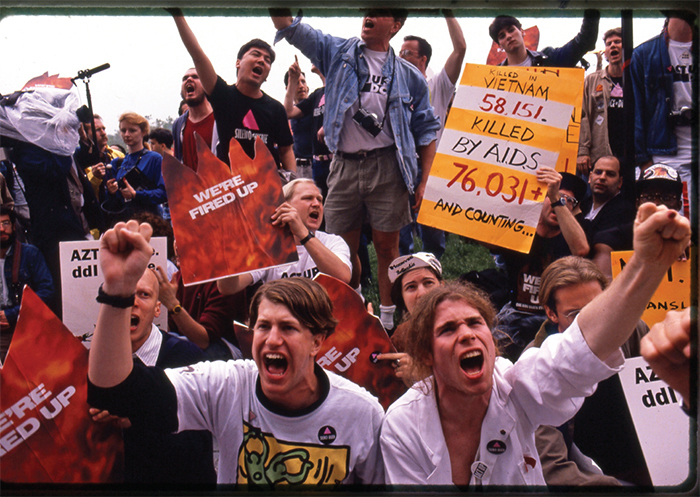 In Bookforum, Cynthia Carr reviews a new and harrowing book on the history of AIDS activism, How to Survive a Plague by David France, who directed a 2012 documentary of the same name. Like the film, the book traces the complex, arduous, and ultimately successful effort by grassroots activists to get the Federal Drug Administration in the US to test and approve an anti-AIDS drug. But as Carr writes, the book also shows how many lives were lost unnecessarily in the face of government inertia and homophobia. Here’s an excerpt from the review:

France’s book focuses on the science: the work of early caregiver-researchers like Dr. Joseph Sonnabend and his activist-patient Michael Callen; the search by AIDS patients for illegal—or even homemade—cures; the dithering at agencies like the National Institute of Allergy and Infectious Diseases (NIAID) that were supposedly studying treatments. Ultimately, center stage goes to the small group of activists who created the Treatment Action Group (TAG), an offshoot of ACT UP, and who managed to work their way inside the pharmaceutical industry. By 1996, fifteen years after the first reports of a “gay cancer,” antiretroviral drugs called protease inhibitors were allowing many patients to manage an HIV/AIDS infection. What becomes clear in How to Survive a Plague, above all, is that it needn’t have taken so long—to put it mildly.

Homophobia slowed everything down, for starters. Although the GRID appellation had changed to AIDS by the late summer of 1982, the plague was still seen as mostly a gay-male problem. The Reagan administration ordered the CDC to reduce spending on the epidemic, though no one yet knew what was causing it or how it was transmitted and hundreds had died. By the middle of 1983, France writes, “more than half of all gay men in New York and San Francisco were infected.”

Unknown to any doctor or patient, at that point, scientists had already discovered the retrovirus that causes AIDS. Yes, early in 1983, at the Institut Pasteur in Paris. I’ve always found this to be one of the most shocking stories to emerge from the plague years, and France is not the first to tell it: how American scientist Dr. Robert Gallo tried to take the credit for this discovery after French scientist Dr. Luc Montagnier sent him samples of what would later be called HIV. Long story short, this delayed both meaningful research and the release of an antibody test.

Then, when that first antibody test did become available, in 1985, most gay men refused to take it for fear that they would lose their jobs, their housing, and their health insurance. Most cities, including New York, had no gay-rights legislation in place. In fact, gay sex was still illegal in many states. That year, twenty state legislatures debated quarantining people with AIDS, while Republican congressman William Dannemeyer introduced a raft of homophobic legislation, including a bill that would give a long prison term to any gay person who tried to donate blood. There was simply no upside to taking the test. There were no treatments.