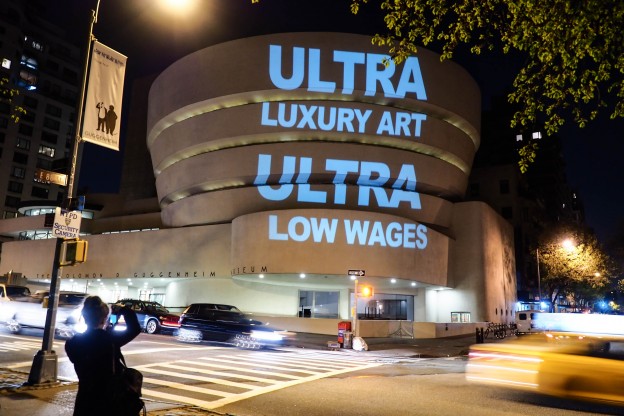 by Michael Hirsch and Kilian Jörg

Economic inequality and precarity are growing at an alarming rate, and political countermovements remain far behind in raising strong opposition to this new exploitative form of neoliberal capitalism. But at least in the cultural sector, there is an almost-consensus that this inequality and precarity are a threat to the entire field and need to be progressively tackled. And yet, inequality in this field is greater than its ever been. The disparities between the few who earn millions and the many who can barely live off their cultural work continue to increase.

What if the growing consciousness of the immense gap in income and wealth among cultural producers could be used in a progressive struggle for solidarity? What if the better-off artists contributed on a voluntary yet collectively organized basis to this project? Instead of continuing to deplore the growing inequalities in the cultural field and the rising precarity of cultural workers, those less subjected to it could start to help solve the problem.

Why shouldn’t they do so? In fact, they are highly dependent on their colleagues as viewers and users, discussion partners and inspirers. Without this social context they would be alone with collectors, gallerists, museum employees, and professional critics. Quite a poor scenario for everybody.

Artists and cultural workers should be regarded as products of their field, as Carl Einstein has argued; we must finally do away with the cult of the individual and the myth of the genius-artist. S/he (but mostly he) is never a lone warrior but is rather shaped by his/her social context and environment. Let’s complete the shift away from the reverence for “genius” by acknowledging its social embeddedness. Let’s financially secure the art field that produces and maintains the geniuses instead of—as we do now—letting the bulk of art practitioners wither in precarity for the sake of the few geniuses they help created. Redistributing the money that genius-artists earn is a first step towards this.

The art market and superstar artists who earn millions are invited to contribute to making the field they depend on more financially secure. Why shouldn’t the financially privileged contribute to the subsistence of the mass of cultural workers on whom their careers rest? After all, it’s difficult to argue in favor of a higher taxation, as all good progressives do, and yet avoid the topic of direct redistribution. We understand our proposal as coming in the wake of recent debates about a universal basic income. It is part of the coming New Deal designed to combat a future of gross inequality.

We propose to create a voluntary Artist Solidarity Fund (ASF) in order to economically secure the cultural field and serve as a utopian model for new progressive forms of solidary politics. The fund would function as a field-specific model of socioeconomic redistribution. We understand it as part of a general movement to overcome the neoliberal dismantling of the social welfare state. In our eyes, our task is not only to defend the classical welfare institutions, but also to invent new ones. The cultural field is one of the many “commons” that make up a free and democratic society: a society of free speech and free exchange. We propose to invent forms that secure this commons institutionally.

ASF is a utopian project. The main problem with utopian projects is how to move from the present reality to the imagined utopian situation. That is both an institutional problem and a collective-consciousness problem; how do we change the mind-set of people currently working in the cultural field? How does this transformation process begin? How do we introduce small-scale utopian projects (like ASF) that can serve as seeds for larger utopian changes in the future? In this regard, there is much to learn from social movements and activists projects around the world. They strive to implement real utopias here and now: building social networks and communities, collecting data, proposing policy alternatives, experimenting with alternative ways of life, practicing forms of mutual aid, etc.

In the cultural field, such commoning practices exist, above in forms of mutual aid. But they are still weak and unsystematic, and most often confined to less privileged players. We propose to include everybody, and to think bigger. ASF could be initiated by any number of different actors in the field. Galleries could initiate a system of income balancing/sharing between their artists, graphic designers, curators, etc. Private or governmental institutions could implement a similar system. Better-off artists could implement a system of financial sharing with their less fortunate colleagues.

This is in fact happening already. The question is how to make it more visible. If various smaller forms of ASF become visible, they can interconnect and form a greater whole that might eventually get city-/state-/continent-wide recognition. For this seeding of utopia, it is important to not propose a polished, “final” model of how ASF should work. It’s better to inspire people to work it out themselves, shaping it to the specific needs of their respective fields, whether the visual arts, performing arts, theater, music, and writing. This is a form of applied ecology!

Similarly, this short proposal-manifesto does not aim to define who is or is not a cultural worker or to decide who should be included in this system of mutual sharing. This would have to be decided case by case, from the bottom up. In our view, any debate arising from such questions will generate, in the future, a fantastic wealth of models and initiatives. Our proposal is intended as part of a general paradigm shift in the democratic public sphere, moving away from implicitly resentful and populist critiques of social inequalities. Let us invent new forms of solidarity. Let us invent new ways of living and working together. Cultural workers unite!

Kilian Jörg (b. 1990) is a philosopher and artist based between Vienna, Berlin, and Brussels. He is the founder of the collective “philosophy unbound.” His main research topics are ecological epistemology and the intersection of art and philosophy. Recent publications: Die Clubmaschine, with Jorinde Schulz (2018). Upcoming publications: Backlash: Essays zur Resilienz der Moderne (2019). See kilianjoerg.blogspot.com.

This fits to what a group of people in DiEM25 are working on - a “Vision for Culture”. Anybody interested in contributing could use this as a starting point (Artists and the likes especially WANTED):

Have you contacted any of the cultural worker responsible for the foto that you are showing?