Can't Help It: Laure Prouvost in Conversation with Didem Pekün 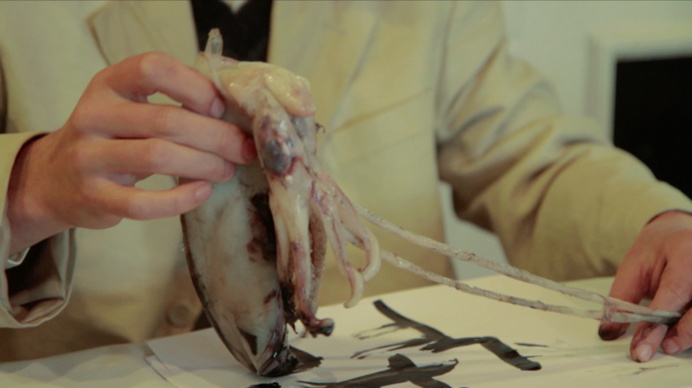 Didem Pekün: I wanted to invite you to do this in the hammam (Turkish bath) in Istanbul, one of the oldest in the city. I thought a quintessential Turkish experience would be a nice start. Kılıç Ali Paşa Hammam. You can get washed and cleaned very thoroughly here. Have you ever been in one? You see it’s very humid—full of steam. I also made a playlist for us; so here’s an experiential gift from me to you: https://play.spotify.com/user/didempekun/playlist/0I0g28V8cxALaxhfEucAjk.

Laure Prouvost: Wonderful. I was thinking of something similar, of taking you to a mud bath … maybe we should start with covering ourselves with the mud of our histories. As you know, I am often surrounded by mud; my granddad is a conceptual artist and his last concept was to dig a tunnel from England to Africa without the authorities knowing about it. What can be done without permission … Anyway, I have been down the tunnel every week looking for him and my last histories through that muddy past … and so, yes, I would love to come get myself clean.

DP: I know, I also thought you might need it after you come back from the tunnel covered in dust. How are they by the way?

LP: I would love to get my hair massaged and cleaned properly, you know it’s dark down there, and super slippery; all the facts of the past seem to melt into our hands and seem to get invented as the anecdote enhances …

The other day I went down the tunnel and I saw two little things shining in the distance. I thought it might be granddad’s eyes, so I screamed: “Granddad, granddad, can you see me? Can you hear me?” But as I got closer with my iPhone, I realized it was just two little nails shining … Granddad has not been home for two years now; we don’t know where he is.

Grandma gets Tesco deliveries, eats crisps, and watches the heater turning; she’s became really fat since he disappeared. The other day she got stuck in the entrance of the tunnel.

DP: Yeah, that’s sad. You know, there are tunnels underneath this hammam, too. Who knows, maybe he’ll come out over here?

Because it’s very old and has very impressive architecture by Mimar Sinan, there might still be some secret underground roads. Look at the ceiling dome, covered with stars and the moon, so celestial … And here we are looking at the ceiling from our bodies covered completely with soap foam in a very wet, humid space, lying down on heated marble. It really is an indulgent experience. And it’s a very ancient practice; you know, they built these spaces for sultans and you actually just sit there and someone comes and washes you, scrubs your dirt away. Kind of an imperial legacy. I actually feel very uncomfortable with another person coming and doing this job for me. My dirt, my problem. How do you deal with your own history?

LP: Yes, I see what you mean. I think the daily big scrub should be ours, we need to clean away the dirt of our past, but it might be good to have someone external do it for us, to go in every corner we might have ignored, have a little distance from our own understanding of what is remembered, what is invented, what we don’t want to look at. I think every country, every person, romanticizes or creates its own history just because, at first, how do you summarize every personal feeling and contribution? But often it’s used to disarm us and not deal with our close history. That’s when fiction takes over.

My own history is totally tangled between events that I have lived and experienced but also fictive events—dreams or memories that exist at the same level as facts. I think only then can we question facts, once dreams and fiction are at the same level.

DP: Amazing, yes, true. Someone should always point out, “Look, here, you are dirty.” To get an outside view of what we’re busy with, we do need each other to act as mirrors. But then, what does fiction do for you? Or perhaps it’s better to ask, what does fiction enable you to do?

LP: It just questions our truth, our belief, our certainty, our mirrors and their reflections.

You’re dealing with this material in this show at SALT as well.

LP: Hm, yes, marble is kind of the opposite of mud. It’s cold and powerful. Often it hides something, covers/decorates a building that might not have been so well finished. It’s also attractive/glamorous, expensive.

My grandma once told me she would like to have her living room covered with marble. I don’t know if she realizes how hard it would be, but I think she would quite like to impress the neighbors and not have to invite them into the muddy, messy living room.

But yes, for me marble is all about power, but it’s also very easy to clean, which could be practical. I did a project at Haus de Kunst in Munich, the whole interior is covered with marble there and it doesn’t have the history of SALT. It was built last century and it really feels like it’s about showing status and power. Hitler built it, so the history connected to that material is heavy. I printed the marble on fabric and everything became floppy, unreal; I had the feeling that we needed to make it liquid, to play with that materiality … you actually started looking at the marble there as a cover up, as a covering of something, hiding something.

For SALT I will produce a new work. I will work with stick men, sanitation workers—cleaners cleaning the mess of the past to better see a future that is also not so clear … “Cleaning your dirty past,” the dust on your shoes from the morning walk, older dust, future mess … in this never-ending dirty world.

I will also play with the marble, stained glass windows, and tromp l’œil. What is the front hiding, what are we covering up? 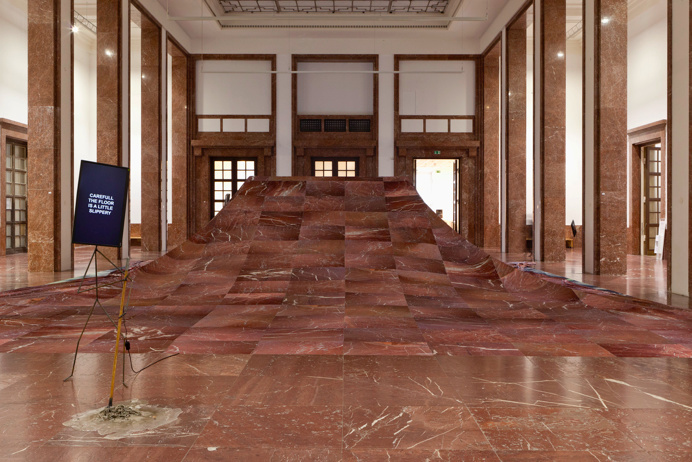 Laure Prouvost, exhibition view of the installation We would be floating away from the dirty past, part of the series DER ÖFFENTLICHKEIT _ VON DEN FREUNDEN HAUS DER KUNST. Photo: Wilfried Petzi, 2015. Courtesy of the artist, and Galerie Nathalie Obadia (Paris and Brussels) and carlier | gebauer (Berlin).

DP: So in a sense it is very futuristic, isn’t it? We talk about histories and all but in the end, really, we are trying to configure a future. What is your imagined future? How do we live there? Are there octopi there? In my imagined future, everything is technicolor; there are lots of cats and there is a universal basic income. Everyone has an equal basis to lean on … And friendship will save the world.

LP: Yes! The future! It’s the past and it will be a melting turquoise blue and green cloud with some cats around, some putty floating around, bodies drifting and working on their wonderful phones in the softest environment.

It will be a little melancholic over the world that existed previously, the complexity of all the textures that were there, but it will be at peace, as you are working, writing a text, doing an interview, like we are doing now. There will always be a few octopi massaging our bodies, tickling us, relaxing us … There will be …

DP: Look, I also brought an octopus here for you but it’s suffering from the heat of the marble unfortunately. What shall we do with it?

LP: The octopus for me is the oldest mind of this planet; it is slimy, smelly when too hot, scary when it grabs you, and extremely elegant when it moves in the water. Unfortunately, in the hammam it will become so smelly we would have to leave. I can even smell her from typing these words, can’t you? I like the idea of words smelling, of memory doing its job. I remember someone saying, “Laure, your films stink” … I love that a letter or a pixel starts to smell. I would love to have an octopus in SALT leaking out of the walls of this Art Hammam that SALT is, a peaceful place in the intense political urgency that Turkey is actually going through now. We need the oldest mind to be here.

DP: Hm, yes, the octopus is elegant partly because it moves so slowly; it can move fast as well, but in its normal setting it is just very gentle. You know, I scuba dive and it is really amazing to see them at the bottom of the sea, how they hide themselves behind multiple small stones to not be noticed. If at the bottom of the sea you see an accumulation of little stones in the midst of sand, it might well be that an octopus is hiding there.

I remember you and I had a chat about speed. What do you think of the speedy process within which we are forced to work? Ideally, what would be your speed? In your films, fast-paced edits almost mirror this speed, thought processes that are constantly trying to catch up with our present time’s schizo-personality; they stink, but they also run breathlessly, your films.

LP: Ha, Didem, what a brain, what a mind! Speed of thought, yes, another very pertinent point in the time we live in. Everything seems to be accelerated but our body events—the loo, food, sleep, which we all need.

The way my films exhaust themselves is a direct mirror of the life I encounter. Maybe to help you enjoy it when it stops! When it’s quiet … For me, film is also a condensation of life, in its speed or quietness, like alcohol. It may come out as one feeling; in the end, it provokes our norm, competes with life, but is only a reflection. It’s also about imagination, with speed, and not seeing the image before and after. You have to make all the missing parts as a viewer, as the main character, the protagonist, the viewer. How do we process all we see, hear, or miss.

But lets take a few deep breaths here … Rrrreaaaadddddd vvvvveeeerrrrrryyyyyyy ssssssslllloooowwwwwwllllyyyy … but then it carries on.

DP: Remember when we were so little, playing in London (we’re both London girls, right?—times when it was inconceivable to imagine Brexit), and dreaming we would grow in the perfect future? We are children of the ’80s, Generation X, the ’80s with all its gymnastics and bad outfits and yet, to me, wonderful music. Who would have thought we’d go through so much chaos in the world. In the end, I had no other choice but to be political and you make such immediate work, with so much aggression in it. “We can’t help” but do what we do.

LP: Yes, our grandparents are a little history, our work is another little history. But it feels urgent that we do our work, responding to our surroundings directly, urgently, as some of our freedoms are being questioned—to keep bringing our past up, to project our future, through deep research, understanding where we come from, what our complex group and personal histories have done for us. But I believe we can do a lot poetically, as your work does so well, using pleasure, experience, and feelings, and this something can say more, it says that you are free from any systems, we invent our own language, a universal, articulating our guts, our impulses … and the role of the artist is very important in the ever hotter physical and political climate.

Let’s get out of the hammam now. I’m really melting; feeling so hot … We will turn into a puddle of soft skin. Let’s go out and feel the fresh air outside that has been sliding over many lands and octopi-filled seas. 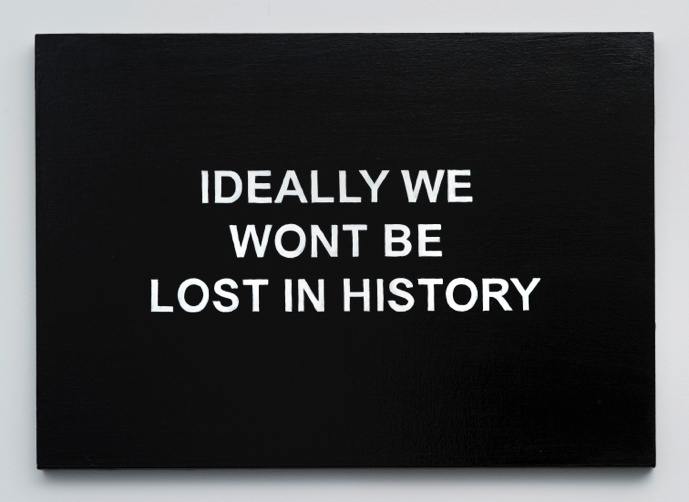