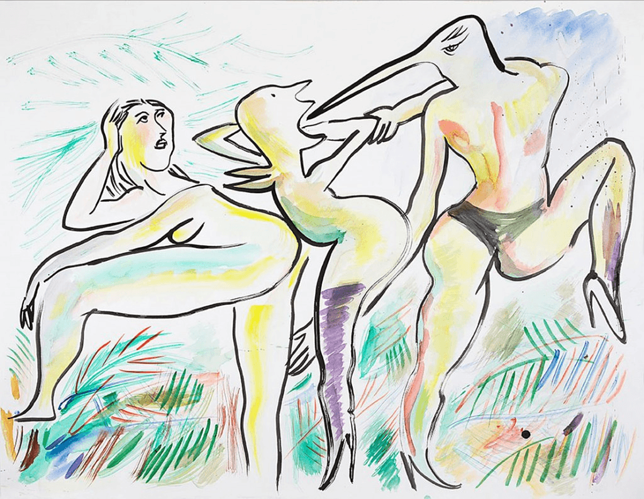 Two years ago French multidisciplinary artist Camille Henrot shot from the art world’s margins to its pulsing centre. Artists envied, critics scrambled for interviews, and curators tussled to show ‘something; anything’. The reason? Henrot won the Silver Lion at the 2013 Venice Biennale for Grosse Fatigue (2013), an ambitious 13-minute video that retold several creation myths in an ecstatic, thrillingly exuberant burst of spoken word poetry and moving images in eye-watering HD.

But for all this, Grosse Fatigue displayed a troubling and dated tendency. It treated non-white bodies as anthropological curiosities, as examples of the exotic, otherworldly or primitive against which whiteness as rational, modern, cerebral and desirable could be constructed, measured and defined. What’s more, it wasn’t an isolated instance.

Last year at Tate Modern (Friday 28 February 2014) a selection of Henrot’s other video works were shown and a large proportion of them restaged this outmoded tendency to ‘other’. The Strife of Love in a Dream (2011) was a fevered depiction of seething Indian multitudes, collective ritual and magical performance that felt dangerously close to classic orientalism; Coupé / Décalé (2011) trained an anthropological (i.e. detached observer to specimen) gaze on a land diving ceremony in the South Pacific republic of Vanuatu; and Cynopolis (2009) focused on dogs scavenging around a pyramid in Sakkara, Egypt.

While the gloss of critical awareness (on the part of Henrot) and the activation of spectatorial critical distance were submitted as, respectively, the get-out clause for post colonial critique and the motive for the production of each work, the spectre of an anachronistic exoticism still loomed large.

Earlier that evening Tate announced plans to revisit Jean-Hubert Martin’s landmark, 1989 group show ‘Magiciens de la Terre’, to ‘reconsider’ the exhibition and its now dated position of exoticising non-Western artists and individuals. So in the Q&A that followed, I asked Henrot about her tendency to exoticise and preserve the other as other: was it evidence of the endurance of Martin’s folly in the twenty first century? Was it something she was uncomfortable with?

Henrot answered she was aware of exoticisation in her work, but strove to tackle and deal with it head on, not shy away. I wasn’t convinced that was happening on screen, but didn’t press the issue. Now, in spectacular style, Henrot seems to be at it again.

In last week’s UK Guardian online, the artist displayed a staggering level of sociocultural dilettantism in a bizarrely gushing article titled ‘Nicki Minaj becomes a feminist art muse’. In the short piece written by journalist Aindrea Emelife, covering a collection of Henrot drawings executed in naïve style (2015 work My Anaconda Don’t pictured above) and inspired by Minaj’s highly sexualised Anaconda music video, Henrot praised the musician as ‘a feminist icon’ who is ‘challenging us to embrace our primal nature’ (my emphasis throughout). Treating Minaj as readymade and performing an exercise that is the polar opposite of détournement (that is elevating culture industry product to the level of multidimensional and oblique critique) Henrot claimed:

‘She is deliberately likening herself to a Barbie, and [referencing] the fastidiousness of being plastic and fake. She’s making herself a caricature of what people want her to be’

For Henrot, then, Minaj is a covert accelerationist, while the Anaconda video:

‘Seems more like a statement on forgetting stereotypes and embracing yourself. It is vulgar, it is beautiful’

But isn’t the objectification of black female bodies, reduced to the abstract physiological markers of breast and bum, a centuries old device of dehumanisation enacted by what bell hooks calls ‘white supremacist patriarchy’? And wasn’t the director – i.e. the person who conceptualised, pitched, shot and oversaw the edit – of Anaconda a white male named Colin Tilley? Of course Tilley’s not a white supremacist, but Henrot’s astonishing lack of awareness is embarrassingly foregrounded by the fact she doesn’t know the person responsible for, as she puts it, ‘abus[ing] the typical “black music-video girl” archetype to the very end’ is a man.

‘I like to think [Minaj] created Anaconda to evoke criticism…and create hate’ says Henrot ‘if only so we too can realize our aversion to the sexualisation of women’.

Really? Did it create hate? Mostly people seemed disappointed; disappointed a truly innovative and at times frighteningly intense artist had seemingly exchanged the experimentation and eccentric schizophrenia of tracks like ‘Stupid Hoe’, for tepid, deconstructed Miami bass, featuring Sir-Mix-a-Lot harping on about how his soft penis (the titular anaconda) won’t get hard unless a woman has a large ass. 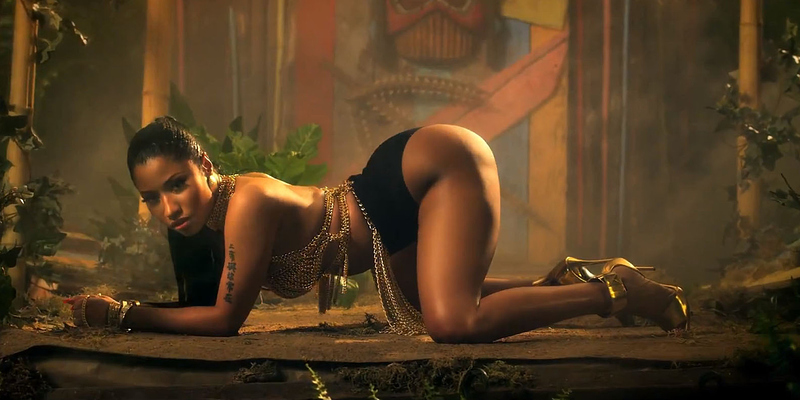 But the issue here isn’t Minaj, it’s Henrot: Henrot speaking for and denying the agency of another artist; Henrot pontificating; Henrot exoticising; Henrot doing the same patronizing veneration of ‘primitive’ culture that modernists like Picasso performed, especially when she declares Minaj is ‘a shaman’ who is ‘portraying the sexuality of women, the wild woman’.

The question is: are statements of ‘positive primitivism’ and the superimposition of a shoddy feminist agenda, okay if it’s simply an artist talking about and taking ownership of a live human being as ‘muse’? What do you think?

Is she appropriating Minaj to articulate her own normative and rather basic ‘ideas about sexuality’?

Is there such a thing as positive primitivism?

Are you excited by Henrot’s new drawings, or should she stick to videos and Ikebana?

Thank you Morgan, these are important questions. I remember thinking about this, perhaps even more so after seeing her “The Pale Fox” exhibition at Chisenhale. The website says:

The title of Henrot’s exhibition is taken from an anthropological study of the West African Dogon people published by Marcel Griaule and Germaine Dieterlen in 1965. Dogon mythology is thought to incorporate the belief systems of several different cultures, as well as astronomical, mathematical and philosophical systems of thought. Within this meta-narrative, the character of the ‘Pale Fox’ represents disorder and chaos but also creation, bringing about the formation of the sun.

On another note, I noticed this article stirring up an interesting discussion on facebook which is a shame because what did Zuckerberg do to deserve that content? Wouldn’t it be better if that conversation took place here?

Hi mrt, I know what you mean about Zuckeberg. I think it’s hard to direct comment online though. Especially when conversations are built on responses to earlier posts. Thanks for starting things here and for the positive feedback.

The question of whether there is such a thing as positive primitivism is a really interesting one. Will Smith wrote a thoughtful article in Art in American recently http://www.artinamericamagazine.com/news-features/news/same-as-it-ever-was-a-conference-on-art-criticism-in-the-digital-age/ about how art criticism and what we see and talk about as central in art is dangerously myopic, seen through the white privileged patriarchal lens, not only because of a long legacy of white supremacy but also because of how elitist and non-diverse criticism continues to be despite the democratization of voice via Internet - given the impossibility of earning a living from it.

If we assume that Henrot is acting as a 21st century artist-anthropologist initiating important discussions about the primitive in human beings, let us ask some probing questions. Is it not imperative that we view and discuss Henrot’s work alongside art made by women of colour about their own bodies and their subjective realities inside these endlessly hypersexualized, objectified bodies? Why are we so interested in hearing about Henrot’s intellectual assessment, or artistic rendition of ‘otherness’? What can she tell us about racialized bodies that racialized women can’t tell us? Is it something about the primitive in the white experience? Positive primitivism can only be positive if it’s transformative. Is Henrot projecting primitivism onto racialized women and using this trope as leverage for some argument around inclusion, or re-appropriation - of the ‘primitive’ within white power (split off and dumped onto ‘the “inferior” other’ since at least the Old Testament and in any colonial act before and after)? If she is working from a desire to help bring the human species to a state of awareness around this, and to healing and wholeness, this could be an important initiative. If this level of interest is her motive, is there evidence that she herself is accessing the ‘primitive’ within herself? Is she being transformed by her inquiries and the use of otherness in her art in any way that can mean we can cease using ‘the other’ to glorify or demonize ‘the primitive’ in the self?

Oh dear… well lets start with the term “primitive people” which immediately assumes that there is other “advanced people” somehow disassociated from and somehow more “superior” - how exactly we are not really sure. But this distinction is in built in the use of such terms and invoking “anthropological” gaze - a colonial discipline (that is anthropology) par excellence.
I don’t know much about Camille Henrot or the work - but I am an Egyptian and I know the kind of work that resident artists created while working on or about Egypt. The video Cynopolis is everything you don’t want to see as an Egyptian. And it is everything that every single Western artist that has been asked to do work on contemporary Egypt did. Mounts of trash, stray dogs running around ruins, Pyramids (yes in this day and age, we are still making videos about pyramids!), more trash, desert, endless sand,…etc. With very few exceptions every Western artist who was asked or decided to do work on Egypt or in Egypt (especially video) had this “inevitable” backdrop.
Henrot takes one step further she obscures the references beyond recognition (the idea of Cynopolis, the large symmetry discovered next to Saqqara pyramid, was a dedicated ritual site to the god Anubis, the guardian of the underworld, represented by the head of the Egyptian wolf, funnily enough not dog or jackal as previously thought (link below). Now that story about Anubis and the mummified bodies of dogs/wolves next to Saqqara with interspersed footage of endless trash and ruins leaves very little to the imagination really. What might possibly be the connection? What can one distill from images of Cairo’s “primitive”, (yet effective - link below) trash-sorting and recycling juxtaposed with footage of stray dogs running over the catacombs that contains the bodies of millions of mummified animals (link below)?
Egyptians built pyramids and tombs and then things went south and now we have a trash problem and an epidemic of stray dogs? Or Egyptians past, present and future look as dismal as mountains of trash and catacombs of dead animals?
I don’t know there should be some kind of punitive action (like forcing them to sit for a history test or learn Arabic) against artists who act so irresponsibly toward their subject matter - orientalism and noe-colonialsim notwithstanding. Really.

New species was lumped with the look-alike Eurasian golden jackal

We build social websites with groundbreaking tech --> See what our platform can do for you: http://rbl.ms/2aydqTl