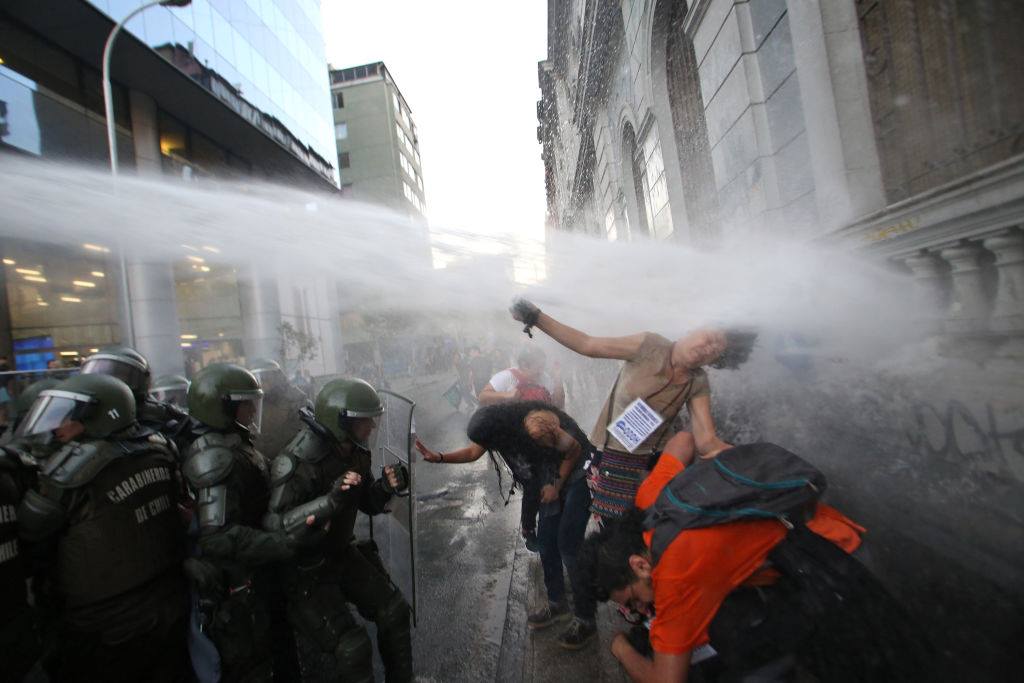 The long disastrous cycle of neoliberalism is approaching its end as violently as it began.

Neoliberalism has systematically devastated the environment, impoverished daily life, reduced wages, precarized labor, privatized public services, and instigated a war of all against all.

This cycle started in 1973, when North American economists used a murderer whose name was Pinochet in order to destroy the democratic experiment of Salvador Allende, elected by the majority of Chilean people, and killed by the fascists who wanted to defend the profit economy.

In the years of Thatcher and Reagan, the counter-revolution experimented in Chile and Argentina has been exported everywhere.

We should not forget by the way that the philosophy of neoliberal capitalism is based on the same principles as Hitlerian Nazism: natural selection, imposition of the law of the strongest in the social sphere, identification of social life and the jungle.

Nazi-liberalism has emerged in the world thanks to the elimination of workers organization, the technical restructuration of production, the privatization of education, of the health system, of public transportation, and last but not least, thanks to the corporate occupation of the media system.

Forty years of Nazi-liberal violence have led to the dismantling of democracy, to the exhaustion of the physical resources of the planet, to climate change, the massive diffusion of aggressive and suicidal psychopathology.

However, Nazi-capitalism might reach its end in the very place where this criminal madness began.

Lately we have witnessed the explosion of a series of distinct revolts, different in nature, in forms, and in goals: the Ecuadorian insurrection, the riots of young people in Hong Kong, the massive wave of protest against Spanish centralism in Catalonia, the armed resistance of Kurdish people against the genocidal fascism of Erdoğan and the Turkish state.

Now the upheaval of Chilean workers and students that started as a protest against a rise in transportation prices is turning into a practical massive critique of financial violence and calls the students and workers of the world to take to the streets with the youngsters who every Friday march against climate change.

Capitalism is a corpse, and we are trapped in it: in this trap everything is rotting: invention, progress, friendship, and love. They told us that there is no alternative to capitalism: in this case we must prepare for war, for environmental apocalypse, and for the extinction of the human race, which gets more probable every day.

But the truth is that the alternative does exist: it is based on getting free from an obsession with economic growth, on the redistribution of the resources, on the reduction of labor time, and on the expansion of time dedicated to the free activity of teaching, research, therapy.

In every city of the world we must express solidarity with the insurgents in Chile, Ecuador, and Hong Kong, but most of all we must prepare to take to the streets, to stop work, to stop urban circulation, and to build structures for the ecological and social reconversion that is badly needed by every person in the world.

Maybe the time has come, the time that we have long been waiting for: the moment for dealing the final blow to this mode of production that is producing death, to attack it in all places in every way.

Let’s support the insurgents who fight against privilege and misery. The Chilean revolt is calling for international solidarity, is claiming the end of the time of horror and infamy, is claiming the beginning of an age worth living.