"Beyond the Breakdown: Three Meditations on a Possible Aftermath" by Franco “Bifo” Berardi 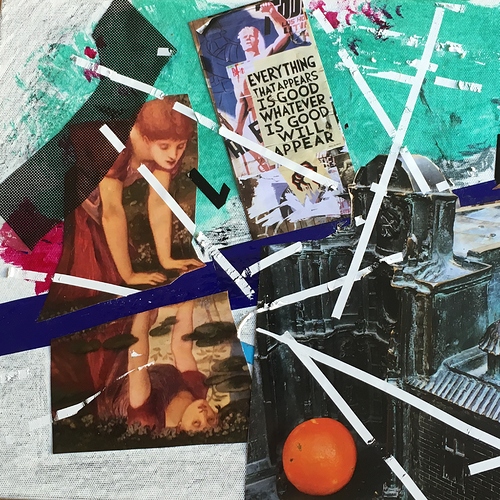 All of a sudden, what we have been thinking for the last fifty years has to be rethought from scratch. Thank god (is god a virus?) that we have an abundance of extra time now because the old business is out of business.

I’m going to say something about three distinct subjects. One: the end of human history, which is clearly unfolding before our eyes. Two: the ongoing emancipation from capitalism, and/or the imminent danger of techno-totalitarianism. Three: the return of death (at last) to the scene of philosophical discourse, after its long modern denial, and the revitalization of the body as dissipation.

Number one: the philosopher who best anticipated the ongoing viral apocalypse is Donna Haraway.

In Staying with the Trouble she suggests that the agent of evolution is no longer Man, the subject of History.

The human is losing its centrality in this chaotic process, and we should not despair over this, like the nostalgics of modern humanism do. At the same time, we should not seek comfort in the delusions of a techno-fix, like the contemporary transhumanist techno-maniacs do.

Human history is over, and the new agents of history are the “critters,” in Haraway’s parlance. The word “critter” refers to small creatures, small playful creatures who do strange things, like provoking mutation. Well: the virus.

Burroughs speaks of viruses as an agents of mutation: biological, cultural, linguistic mutation.

Critters do not exist as individuals. They spread collectively, as a process of proliferation.

The year 2020 should be seen as the year when human history dissolved—not because human beings disappear from planet Earth, but because planet Earth, tired of their arrogance, launched a micro-campaign to destroy their Will zur Macht.

The Earth is rebelling against the world, and the agents of planet Earth are floods, fires, and most of all critters.

Therefore, the agent of evolution is no longer the conscious, aggressive, and strong-willed human being—but molecular matter, micro-flows of uncontrollable critters who invade the space of production, and the space of discourse, replacing History with Her-story, the time in which teleological Reason is replaced by Sensibility and sensuous chaotic becoming.

The end of subjectivity as the engine of the historical process implies the end of what we have called capital-H “History,” and implies the beginning of a process in which conscious teleology is replaced by multiple strategies of proliferation.

Proliferation, the spread of molecular processes, replaces history as macro-project.

Thought, art, and politics are no longer to be seen as projects of totalization (Totalizierung, in Hegel’s sense), but as processes of proliferation without totality.

After forty years of neoliberal acceleration, the race of financial capitalism has suddenly ground to a halt. One, two, three months of global lockdown, a long interruption of the production process and of the global circulation of people and goods, a long period of seclusion, the tragedy of the pandemic … all of this is going to break capitalist dynamics in a way that may be irremediable, irreversible. The powers that manage global capital at the political and financial level are desperately trying to save the economy, injecting enormous amounts of money into it. Billions, billions of billions … figures, numbers that now tend to mean: zero.

All of a sudden money means nothing, or very little.

Why are you giving money to a dead body? Can you revive the body of the global economy by injecting money into it? You can’t. The point is that both the supply side and the demand side are immune to money stimulus, because the slump is not happening for financial reasons (like in 2008), but because of the collapse of bodies, and bodies have nothing to do with financial stimulus.

We are passing the threshold that leads beyond the cycle of labor–money–consumption.

When, one day, the body comes out from the confinement of quarantine, the problem will not be rebalancing the relation between time, work, and money, rebalancing debt and repayment. The European Union has been fractured and weakened by its obsession with debt and balance, but people are dying, hospitals are running out of ventilators, and doctors are overwhelmed by fatigue, anxiety, and fear of infection. Right now this cannot be changed by money, because money is not the problem. The problem is: What are our concrete needs? What is useful for human life, for collectivity, for therapy?

Use value, long expelled from the field of the economics, is back, and the useful is now king.

So money is impotent now. Only social solidarity and scientific intelligence are alive, and they can become politically powerful. This is why I think that at the end of the global quarantine, we won’t go back to normal. Normal will never come back. What will happen in the aftermath has not yet been determined, and is not predictable.

We face two political alternatives: either a techno-totalitarian system that will relaunch the capitalist economy by means of violence, or the liberation of human activity from capitalist abstraction and the creation of a molecular society based on usefulness.

The Chinese government is already experimenting on a massive scale with techno-totalitarian capitalism. This techno-totalitarian solution, anticipated by the provisional abolition of individual freedom, may become the dominant system of the time to come, as Agamben has rightly pointed out in his recent controversial texts.

But what Agamben says is only an obvious description of the present emergency, and of the probable future. I want to go beyond the probable, because the possible is more interesting to me. And the possible is contained in the breakdown of abstraction, and in the dramatic return of the concrete body as a bearer of concrete needs.

The useful is back in the social field. Usefulness, long forgotten and denied by the capitalist process of abstract valorization, is now the king of the scene.

The sky is clear in these days of quarantine, the atmosphere is free from polluting particulates, as factories are closed and cars cannot circulate. Will we go back to the polluting extractive economy? Will we go back to the normal frenzy of destruction for accumulation, and of useless acceleration for the sake of exchange value? No, we must go forward, toward the creation of a society based on the production of the useful.

What do we need now? Now, in the immediate now, we need a vaccine against the malady, we need protective masks, and we need intensive care equipment. And in the long run we need food, we need affection and pleasure. And a new culture of tenderness, solidarity, and frugality.

What is left of capitalist power will try to impose a techno-totalitarian system of control on society—this is obvious. But the alternative is here now: a society free from the compulsions of accumulation and economic growth.

The third point I would like to reflect on is the return of mortality as the defining feature of human life. Capitalism has been a fantastic attempt to overcome death. Accumulation is the Ersatz that replaces death with the abstraction of value, the artificial continuity of life in the marketplace.

The shift from industrial production to info-work, the shift from conjunction to connection in the sphere of communication, is the end point of the race toward abstraction, which is the main thread of capitalist evolution.

In a pandemic, conjunction is forbidden—stay home, don’t visit friends, keep your distance, don’t touch anybody. An enormous expansion of time spent online is underway, unavoidably, and all social relations—work, production, education—have been displaced into this sphere that prohibits conjunction. Offline social exchange is no longer possible. What will happen after weeks and months of this?

Maybe, as Agamben predicts, we’ll enter the totalitarian hell of an all-connected lifestyle. But a different scenario is possible.

What if the overload of connection breaks the spell? When the pandemic finally dissipates (assuming that it will), it’s possible that a new psychological identification will have imposed itself: online equals sickness. We also have to imagine and create a movement of caressing that will compel young people to turn off their connective screens as reminders of a lonely and fearful time. This does not mean that we should go back to the physical fatigue of industrial capitalism; it rather means that we should take advantage of the richness of time that automation emancipates from physical labor, and dedicate our time to physical and mental pleasure.

The massive spread of death we are witnessing in this pandemic may reactivate our sense of time as enjoyment, rather than as the postponement of joy.

At the end of the pandemic, at the end of the long period of isolation, people may simply continue sinking into the eternal nothingness of virtual connection, of distancing and techno-totalitarian integration. This is possible, even probable. But we should not be confined by the probable. We should discover the possibility hidden in the present.

It may be that after months of constant online connectivity, people will come out of their houses and apartments looking for conjunction. A movement of solidarity and tenderness might arise, leading people toward an emancipation from connective dictatorship.

Death is back at the center of the landscape: the long denied mortality that makes humans alive.