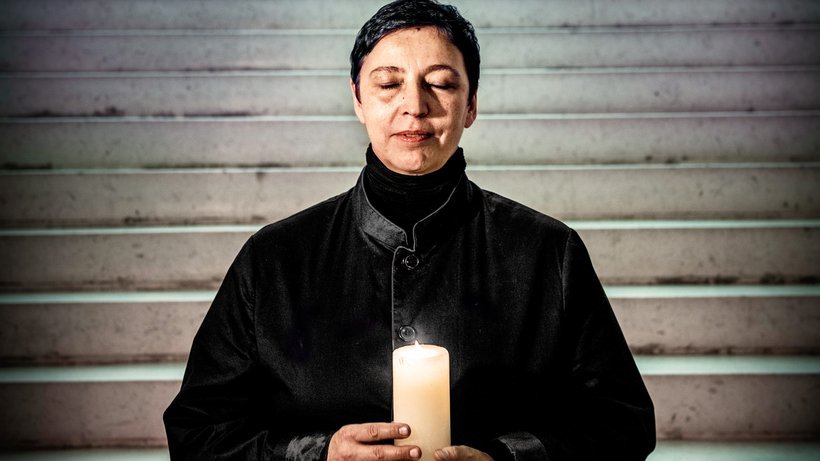 This article originally appeared in Zeit Online on October 25, 2017. It has been translated from the German by Leon Dische-Becker.

Curator Beatrix Ruf is as influential as anyone in the museum world. Now she surprisingly resigned from her job in Amsterdam. The ensuing scandal lays bare the power relations in the art world.

Beatrix Ruf weaves the art world’s most tasteful networks. Almost everyone gets caught up in them: artists, curators, collectors, gallerists. But that web couldn’t save her. Or did she just get stuck in it? She was the director of the Stedelijk Museum in Amsterdam, a consultant, publisher, curator of preeminent importance, only to resign her post last week. A sudden crash out of full flight—and one of the most interesting art scandals in years.

This scandal is not about forgeries or a fraud. Instead, it revolves around the question: who decides what is desirable art? This scandal is about the freedom of museums (or rather, about the new unfreedom).

Gerhard Richter, according to recent reports, has accrued a fortune of 700 million euros; Neo Rauch, an estimated 100 million. By comparison, the amount that Beatrix Ruf was making on the side seems altogether modest. Her company Currentmatters, specializing in consulting services, earned her 437,306 euros in just one year, according to Dutch media reports. Apparently, Ruf forgot to disclose this income to her employer, Stedelijk. That wasn’t particularly smart, given that some of the collectors she advised were also art lenders that were allowed to present their works in her museum. A quid pro quo—or so it seems. And again, the dumb public is left in the dark.

Whether Ruf actually did anything illegal remains unclear. She herself isn’t speaking to anyone right now. The museum is following her lead, and refers to the fact that external parties are looking into the case.

Allegedly, according to sources within the museum, Ruf notified the board of all her activities—of her countless participations in award juries and selection committees. Her consulting services were equally sought-after by the insurance company Swiss Re as they were at nuclear research center Cern, or in museums like the Mumok in Vienna. Even after its director’s departure, the Stedelijk website reports proudly how well she handled all these parallel and intertwining interests. If nothing else, this was the reason they brought her to Amsterdam.

The realm of contemporary art can be difficult to navigate, and this heightens the importance of a sherpa like Beatrix Ruf. When she shows up, there is certainty. If she finds an artist important, she can suggest them for prizes and stipends, recommend them to her gallerist friends, honor them with an exhibition. Most importantly, perhaps, she can connect them with influential collectors like Michael Ringier or Maja Hoffman, both longstanding employers of hers. They are decidedly open to her advice, because they know that the advice is accredited—underwritten by that self-fulfilling prophecy known as Beatrix Ruf. The Dutch artist Magali Reus won the Prix de Rome, with Ruf sitting in the Jury of the under-40 prize; the following year, her work featured hugely at Stedelijk. Similarly, Ruf was on the jury that awarded the 2016 Turner prize to Helen Marten—an artist Ruf had previously honored with an exhibition.

In the past, museums prided themselves on their collections; today, they pride themselves at least equally on their curators. The more bustling their grind, the better—their connections generate authority. Their ability to draw collectors, perspective givers, and donors becomes particularly important to the museum if the acquisitions budget is left wanting. The museums depend on the goodwill of these patrons and on curators who can maintain that goodwill.

If this power struggle was purely about aesthetic considerations, Ruf would have probably never resigned. But as the influence of curators grows, so does the economic interest in art. Museums, which were once thought to exist outside the value chain, have had to make continued overtures to the market and it’s dividend-based logic—even at the danger of losing their credibility.

Accordingly, South Korean multimillionaire Yoo Byung-eun got to celebrate himself at the Louvre in 2012. After donating roughly a million euros, his nature photography was shown in a pavillion in the Tuileries. Other public museums let gallerists support them, like Anton Kern or Larry Gagosian, who in 2014 presented the most recent work of painter Mark Grotjahn in the Kunstverein Freiburg, coinciding by perfect coincidence with Art Basel. In Los Angeles, meanwhile, an art dealer, the famous Jeffrey Deitch, had just become director of the influential MOCA.

But despite the growing proximity between market and museum, it is still rare that curators bolster their accounts the way Ruf did. Many museums, such as the Prussian Cultural Heritage Foundation, prohibit their employees from any “secondary employment in or for the dealing of art works.” And so Udo Kittlemann, the director of the Nationalgalerie, is not available “for dealing.” He is, however, available to Miuccia Prada, the most important trading partner of contemporary art. For the latter’s foundation, he just curated a gorgeous exhibition in Venice—to the chagrin of some Berliners, who feel that he should spend his time and energy reinvigorating their peacefully slumbering museums.

As in Ruf’s case, Kittleman’s side hustle could be justified by the boost it gives the curator’s position (and that of his institution), and secondarily by the way it eases the acquisition of expensive loan items. Without those loans, there would be no sparkling special exhibitions: without these especial exhibitions, there would be no visitors; no visitors, no museum. This is the logic that often prevails in the art business. It forces a curator to be on good terms with as many art dealers and donors as possible. Without their goodwill, their work would be over.

The consequences of this alignment are considerable: where the market has a say, where it eases the supply of artworks, the resolution of copyright issues, where it provides the transportation, when the artist becomes his own curator (as once happened with Martin Eder in Dresden), the museum quickly becomes an open playing field for private interests. And so it forfeits its autonomy. It is no longer a free space for free art. Every exhibition becomes a forced celebration of the artist, rather than an open inquiry where deficits are pointed out and comparisons can be drawn that may be unfavorable, even annoying to the collector. The museum has abdicated its role as a space for reflection.

The principles Ruf adhered to did exactly that: regardless of whether she actually broke any laws, her curatorial powers have contributed to the corruption of another power, the definitional power of museums. In the end, the mere suspicion that self-enrichment is more important than the art is enough to undermine the museum’s authority. And so the curators hit rock bottom.