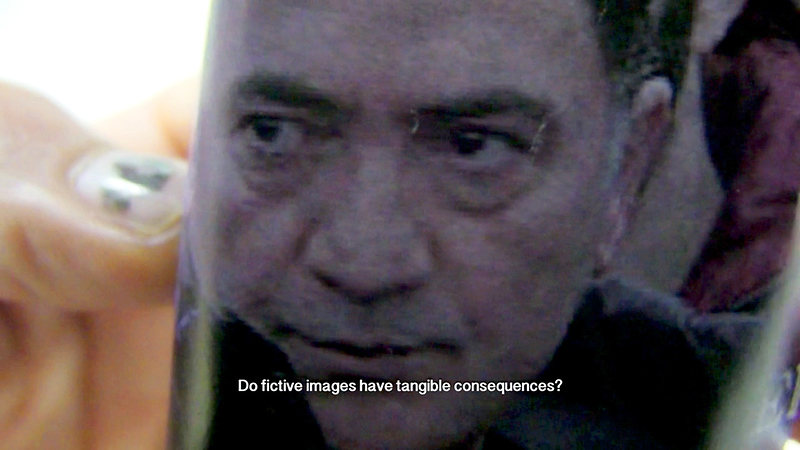 It was my intention for a long time to publish a statement about the censorship of my video Ayhan and me (2016), part of the group exhibition Post-Peace that was censored by Akbank Sanat. When the exhibition was censored, I wanted to prioritize the group statement of the collaborators and artists of the exhibition. The group statement is out, and it’s now my turn. I would like this statement to be seen as a contribution to the statements made by Katia Krupennikova, the curator of the show; the jury of the Akbank Sanat International Curator Competition 2015; Anonymous Stateless Immigrants Movement; and the artist and contributors of the exhibition Post-Peace. With this statement, I aim to share my own experience.

I am the only artist from Turkey that was supposed to take part in the group exhibition Post-Peace. My initial proposal was specifically about Turkey. This proposal went through a censorship process starting months before the originally planned opening date. I’d like to share my experience with the hope that it will shed a little bit of light on the censorship that of the exhibition itself and the problem of censorship in the art field more generally.

The group exhibition Post-Peace was initially planned to take place in Amsterdam. I was invited by the curator at this early stage. Later on, with this exhibition concept Katia Krupennikova applied for and won the Akbank Sanat International Curator Competition 2015. The exhibition moved from Amsterdam to Istanbul. In one of the talks Katia had with Akbank Sanat managers in November 2015, she mentioned to them my proposal. They told Katia that the political situation in Turkey is tense, and that they can not commission the proposed work. Katia asked for an official statement from the director of Akbank Sanat, Derya Bigalı. She didn’t receive a reply. I met Katia when she came back to Amsterdam. We wrote together to Zeynep Arınç from Akbank Sanat, with whom Katia has been in contact throughout the process. We asked for a formal rejection letter from the director, explaining the reasons for their decision. Zeynep Arınç replied to our email informally telling Katia that Akbank Sanat can not commission this work.

My initial work proposal, censored by Akbank Sanat, was about Ayhan Çarkın. Ayhan Çarkın was part of JITEM, an unofficial paramilitary wing of the Turkish Security Forces active in mass executions of the Kurdish population in the 1990s. As a part of the deep state and JITEM, Ayhan Çarkın confessed in 2011 that he led operations that killed over 1000 Kurdish people during the 1990s. These confessions were made on television, and videos from those confessions are accessible on Youtube. The work I was planning to make was about Ayhan Çarkın’s personal transformation, how historical reality is constructed, and how to think about the term ‘evil’. This work, which was only a written proposal at that point, was censored by Akbank Sanat, even though it was part of the curator’s exhibition concept from the very beginning, and was chosen by an international jury as part of the exhibition for Akbank Sanat International Curator Competition 2015.

This was the first time something like this had happened to me. Instead of leaving the exhibition, Katia and I came up with a proposal for a new work. The new work was going to talk about the censorship of my previous proposal, as well as the politics of images of war in Turkey. Akbank Sanat requested to see the script of this new work. Katia didn’t respond to this request, and I told her that I’m not in favor of showing the script, due to Akbank Sanat’s attitude up till that point. Consequently we asked the founder of the Akbank Sanat International Curator Competition, curator Başak Şenova, for her opinion on this issue. At first she supported us, but after she consulted with Akbank Sanat she told us that the refusal by Akbank Sanat is understandable. To be honest these reactions made me feel alone. Turkey is really going through a tough period, and I started questioning why, as an artist, I was putting the whole institution at risk?

In December before I started producing my second proposal I realized that I did not feel comfortable with accepting the situation as it was. I decided to make the censorship public, by writing a letter and sending it to the press. I met with Katia and we started writing an email explaining the situation to the jury. In mid January, before we finalized the letter, Katia told me that she talked to Akbank Sanat and they agreed to the new proposal and no longer demanded to see the script in advance. I started making the video. I got in contact with Siyah Bant, a group that deals with censorship in the field of art in Turkey. I got a lot of support from them, which helped against the feeling of isolation such censorship cases cause. Also, we started thinking about ways to deal with this specific case. The final video took shape as a result of this process. I believe watching the video complements this statement.

Video link to “Ayhan and me”

The video was finalized on the 23rd of February, and Katia Krupennikova presented all the works to Akbank Sanat for technical check on the same day. The exhibition was supposed to open on the 1st of March, and it was cancelled/censored on the 25th of February. There was no exhibition announcement on Akbank Sanat’s website or social media accounts, or there was any exhibition poster at Akbank Sanat’s space at any point. This makes me think that Akbank Sanat has been considering this decision for a long time, but didn’t communicate it to the curator or any other contributor of the show.

I don’t know and will never get definite confirmation whether the cancellation of Post-Peace was related to the content of my work or not. However this does not change what happened. Together with Siyah Bant we prepared a press release explaining the censorship prior to the cancellation of the exhibition. Even if the exhibition had not been cancelled, I was planning to publicize my experience of Akbank Sanat’s censorship.

At this point I have a number of questions to ask:

Institutions like Akbank Sanat will not admit that they censored the content of any exhibition, and will not take responsibility for the situation. These institutions interfere with cultural content due to their connections to corporations and banks, allied with oppressive government policies. This paves the way for normalizing censorship and abusing the political situation of the country as an excuse, as in the text explaining the cancellation by the director of Akbank Sanat (“Turkey is still reeling from their emotional aftershocks and remains in a period of mourning.”). I believe we need to expose these government-allied mentalities and structures over and over again. Institutions like Akbank Sanat can continue their activities, because every time they censor the cultural arena they get away with it; their acts are not revealed, they are not held accountable, and they continue to receive support. Letting this happen deserts the fields of culture and art, and distances them from the struggles going on in the country. At the same time, this acceptance and silence obstructs those people and institutions that bravely resist, and further restricts already shrinking zones of freedom. We, as cultural and art workers, can counter this by refusing to accept the silencing of artistic expression.

Any cultural and art worker who is ignorant of the ongoing oppression in Turkey, who does not call censorship by its name, who does not see or fails to recognize the ongoing massacres in Kurdish lands becomes part of this oppressive structure. I have channels to speak out, I do not want to intimidate people who don’t have access to such channels, or who have to stay silent in order to avoid risking their lives. It is exactly for this reason, that we have to speak out en masse. I also think that ‘speaking out’ can happen in a variety of ways, just as acts of resistance do.

Although I have a hard time believing it myself, almost everyone I met in Cizre (a Kurdish town inside Turkey bordering Syria) in 2015, has either been killed or else left Cizre in order to stay alive. I owe this statement to the people I met in Cizre. Many other Kurdish towns and cities have suffered from or are currently undergoing similar attacks by Turkish State security forces. Every struggle in this region is connected, even though some might want to separate them. The one sharp difference is that some people get censored and others get killed in this country. Exactly because of this, we, the ones who get censored, need to keep ourselves connected to other resistances and realize of our privilege. With this letter I wish to show solidarity with those working in the fields of culture and art who have already experienced or might experience similar censorships. My statement aims to express that we do not have to bear those abuses alone, with the hope that more of us will be able to speak up, and the hope that we can act collectively.

*Image caption: video still of “Ayhan and me” via belit sağ