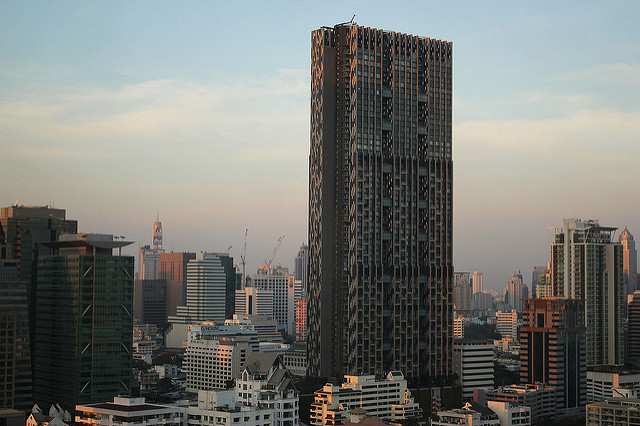 At the n+1 website, Daniel Brook examines the work of the progressive-minded, Singapore-based architecture firm WOHA (aka Wong Mun Summ and Richard Hassell), along with their building philosophy as expressed in their manifesto Garden City Mega City: Rethinking Cities for the Age of Global Warming. Whereas most Western architects have a superficial concept of “sustainable” architecture, treating it as nothing more than a trendy label, WOHA thinks deeply about the kinds of buildings and cities that can withstand and even mitigate the coming climate chaos. Here’s an excerpt from Brooks’ piece:

Western architects’ blindness to these problems appears to be inversely related to the number of times they proclaim themselves to be forging a golden age of green architecture, producing one LEED-certified monolith after another. But with sustainability reduced to the level of a single building rather than an entire city, one begins to wonder: who exactly are they “demonstrating” these features for? Most likely, other high-end pet projects in other rich, small, cold, stagnant Western cities. In Europe, these projects often channel a thinly veiled moral superiority that does little beyond taunting impoverished developing countries. In America, the demonstration projects are often “green” mansions for West Coast billionaires broadcasting their “mindfulness.”

A truly sustainable city, Wong and Hassell write, “will require much more than the insertion of sustainable components.” It will require a reengagement with citywide environmental thinking and planning that grew out of the energy crisis in the 1970s but got waylaid, as they put it, during the “‘greed is good’ comfort zone of the late 1980s.” Rather than take seriously the high-end projects in the West’s “precincts of affluence” that brand themselves “sustainable”—a term the authors condemn for being “used so often and so lazily” that it has become “a tiresome cliché”—WOHA suggests replacing the word with the more severe, but appropriate, “survivability.” The stakes, then, are clearer: How should we build and plan in order to make it out alive?