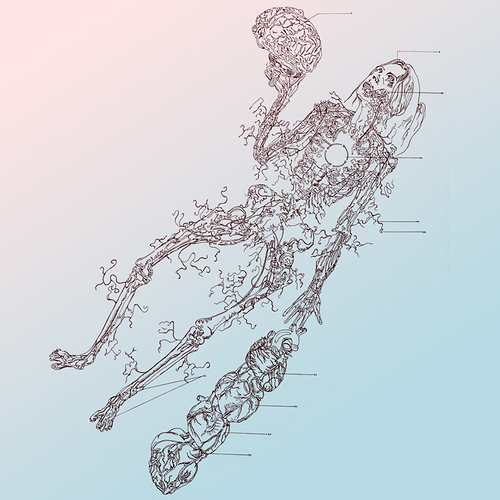 A group of New York-based Left Accelerationists affiliated with The New Centre have published their polemics in a hyperstitionally-titled #AltWoke Manifesto. In their own words, the text is, “the work of ANON. We are a collective of “Other.” Some of us are sex workers, some immigrants, many of us queer. There are even a few privileged white cucks amongst us. Never the less, ANON is largely the work and brainchild of People of Color (PoC). Our social disciplines are as varied as our identities: from Journalists to dominatrixes. ANON are the intellectual cousins of #BlackLivesMatter divorced from liberalism.”

There is no term more ubiquitous, obnoxious, and self-serving in our current lexicon as “woke.” Woke is safety-pin politics, masturbatory symbolism, and virtue signaling of a deflated Left insulated by algorithms, filter bubbles, and browser extensions that replace pictures of Donald Trump with Pinterest recipes.

Woke is a misnomer — it’s actually asleep and myopic. Woke is a safe space for the easily distracted and defensive pop culture inbred. Woke is the Left curled up in a fetal ball scribbling think pieces about Broad City while its rights get trampled by ascendant fascism, domestically and globally.

Woke is a sanctimonious grammar-nazi who critiques the bully’s phrasing of “stop hitting yourself,” through toothless gums. Woke is too ethical for its own good.

Woke is the gospel truth of the new evangelical Leftist. Woke is the Left’s consolidated failures distilled into a monosyllabic buzzword. A whimper into the digital landscape prefixed with a hashtag, arriving at the same point each time: #Woke is the literal antithesis of progress.

Catalogue of The Woke Left’s Failures:

The moderate Left misappropriated theoretical terms and concepts, divorced from any actual theory. Identity politics, despite its origins in academia, flourishes best on social media — it’s the most accessible concept for the moderate liberals to grasp.

“Well, if identity is only a game, if it is only a procedure to have relations, social and sexual-pleasure relationships that create new friendships, it is useful. But if identity becomes the problem of sexual existence, and if people think that they have to ‘uncover’ their ‘own identity,’ and that their own identity has to become the law, the principle, the code of their existence; if the perennial question they ask is ‘Does this thing conform to my identity?’ then, I think, they will turn back to a kind of ethics very close to the old heterosexual virility. If we are asked to relate to the question of identity, it must be an identity to our unique selves. But the relationships we have to have with ourselves are not ones of identity, rather, they must be relationships of differentiation, of creation, of innovation. To be the same is really boring. We must not exclude identity if people find their pleasure through this identity, but we must not think of this identity as an ethical universal rule.” — Michel Foucault, “Sex, Power, and the Politics of Identity” (1984)

Identity politics became an albatross, however. Both the moderate and radical were too eager to evangelize oppressed identities. There was no room for discussion, no place for debate. Call outs, clap backs, and other reality tv patois replaced dialectics.

Representation is the de facto litmus of society’s progress for the moderate liberal — society appeared more inclusive and diverse because “Orange is the New Black” has a female lead and a multiethnic supporting cast. They inhabit a never ending, curated echo chamber of think pieces, listicles, notifications, and retweets.

Everyone within their algorithmic ghetto shares their sentiments about society. The algorithm makes their small corner seem far more vast than it actually is, and as a result, the moderate extends this myopia to society at large.

The moderate midwifed the birth of the Alt-Right through bipartisan compromises. Moderate liberals are basically content to vest trust in their vaunted democratic party as it slides further to the right, thereby underpinning a level of discourse friendly to the far-right. It’s worth remembering that the end of the 20th and beginning of the 21st centuries were a period of diehard cooperation between liberals and conservatives in crafting today’s authoritarianism.

Neoconservatism provided socio-political planning that complemented a neoliberal economic agenda. This is why the radical Left blames liberals as well as conservatives for ‘command and control policing’, mass surveillance and this century’s rationale for endless warfare.

Moderate liberals provided and adopted theoretical frameworks that explained away structural oppression but retained an appearance of caring about racism and equality across spectrums of gender and sexuality.

This was an obvious farce that mystified progress and the far right took advantage of this because they actually suffered no serious political setbacks. Liberalism provided an incubator for the alt right to form by mollifying actual demands for change.

“If politics without passion leads to cold-hearted, bureaucratic technocracy, then passion bereft of analysis risks becoming a libidinally driven surrogate for effective action. Politics comes to be about feeling of personal empowerment, masking an absence of strategic gains.” — Nick Srnicek and Alex Williams, “Inventing the Future” (2015)

If the liberal is the evangelical, pearl clutching apostle of the woke Left, the radical, then, is St. Augustine – the hierophant, the pedagogue. The radical is the vanguard inhabiting academia & activism, creating the language and atmosphere of critique.

Its ideologies trickle down from intellectuals at universities to moderate liberals on social media, and more recently, the Alt-Right (e.g. culture jamming by way of “meme magic” or the synthesis of identity politics and white nationalism by way of identitarianism).

Radicals scapegoated liberals to absolve themselves of any responsibility by being all critique with no tangible answers. The radical left in its current incarnation is somewhat fossilized in terms of strategies and needs an immediate remodelling.

The radical is too comfortable inhabiting only the periphery of academia & activism. Radical academics and activists are insulated not only by algorithms but also their obsolescence. The radical academic failed to bridge the gap between intellectuals & larger society.

That is, intellectuals failed to subvert hegemony and normativity. Academics did not do enough to reach beyond universities and make positive reforms to public education. Intellectuals failed to politicize the natural sciences early enough. Intellectuals lost programming and hacker culture to neoliberalism & libertarians. Computer science transitioned from cyberpunk to Silicon Valley venture capitalism.

Had radical academics succeeded, there might’ve been more legitimacy in the fight to combat climate change. Or traditional journalism wouldn’t have been so easily defeated by a post-facts information economy. What we have now is a new Scholasticism of students & professors who act as clergy, dominated by an agitated, anti-intellectual populist bloc.

“The idea that one organisation, tactic or strategy applies equally well to any sort of struggle is one of the most pervasive and damaging beliefs among today’s left. Strategic reflection – on means and ends, enemies and allies – is necessary before approaching any political project. Given the nature of global capitalism, any postcapitalist project will require an ambitious, abstract, mediated, complex and global approach – one that folk-political approaches are incapable of providing.” — Nick Srnicek and Alex Williams, “Inventing the Future” (2015)

AltWoke is a new awakening for the post-modern Left to navigate the protean digital era. Altwoke can be categorized as the new New Left. Or Second Wave Neo-Marxism. The Post- Truth Left. Anti-liberal postcapitalist left. AltWoke is antithetical to Silicone Valley techno-neoliberalism. AltWoke is not the cult of Kurzweil. AltWoke is not merely analogous to the Alt-Right. AltWoke injects planning back into left-wing politics. AltWoke supports universal basic income, biotechnology, and radical energy reforms to combat climate change, open borders, new forms of urban planning and the liquidation of Western hegemony. AltWoke sees opportunity in disaster. AltWoke is the Left taking futurism away from fascism. David Harvey is #altwoke. Situationist International is #altwoke. Jean Baudrillard is #altwoke. Roberto Mangabeira Unger is #altwoke. Edward Snowden is #altwoke. Daniel Keller is #altwoke. Chelsea Manning is #altwoke. William Gibson is #altwoke. Holly Herndon is #altoke. Franz Fanon is #altwoke. Alvin Toffler is #altwoke.

The long overdue left populism of the People of Colour. Accelerationism at its most direct and political instantiation. One step ahead of the leftist liberal game because instead of saying we need to practice left populism (“What if populism is not the problem, but the solution?”), they are actually doing it. hence, “listen to the kids bro”

I’m curious to see where they go from here. How would ANON go about praxis? Is it even possible to organize under a left accelerationist ideology? There’s a lot left unanswered but this sounds promising.

There was no room for discussion, no place for debate.

This is why the radical Left blames [X] … for ‘command and control policing’, mass surveillance and this century’s rationale for endless warfare.

– Just a comment on the use of the word “liberal.” None of the situations attributed to “liberals” would be supported by them. The first denies liberty of conscience and speech; the second denies liberty of movement, privacy, and the right of sovereignty and of bodily integrity. The last denies liberty simpliciter. There is no liberty where there is oppression.

It is an odd feature of outrage right now that the term “liberal” is misused across the political spectrum. If we want to criticize liberalism accurately, we have to get it right.

It sounds like they want to dispose of the entire left both radical and moderate with something else entirely.

Thank you – that sounds probable.

But it’s ironic: labelling doesn’t help. It’s deeply conservative. Better to stick to positions. And, in fact, the positions of classical liberals would object to what was ascribed to liberalism. The manifesto is inaccurate. And inaccuracy doesn’t help. Cf. Rosi Braidotti’s awesome post on eFlux here after the election. Being accurate matters. It allows us to resist and to critique.

Can’t get much more coin-term-y clickbait than the alt woke manifesto, which I am not going to do the justice of using their hashtag. The fact that they are anon was offset by the fact that it’s a manifesto, the most overwrought way to start a movement by peeing on other people’s ideas. Their praxis includes making themselves go viral, driving people into their filter bubbles, and other Zizek-isms. Do not be fooled by these ego scratchers into thinking they are contributing to change! What they are contributing to includes the things that they supposedly denounce, especially including gentrification.