"The privileged, violent stunt that is the Venice Biennale boat project" 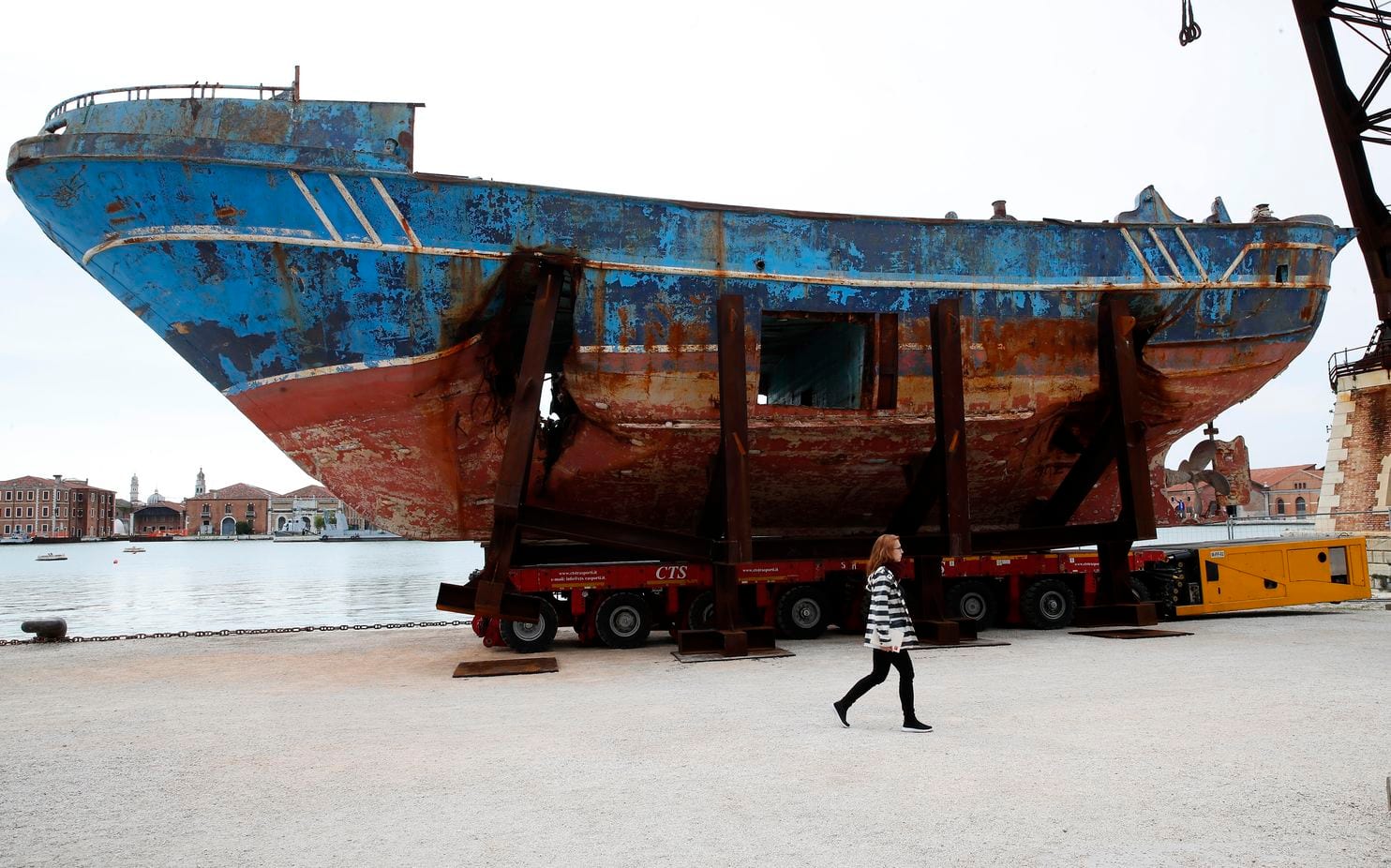 In the Egypt-based web magazine Mada, curator and artist Alexandra Stock offers a lacerating and impassioned critique of the most controversial artwork at this year’s Venice Biennale – Christoph Büchel’s Barca Nostra, a boat that in 2015 sunk to the bottom of the Mediterranean with hundreds of migrants inside, and was later recovered and put on display for the Biennale. Sharp writes that she is wary of giving Barca Nostra any more publicity, since it has already been covered extensively my the mainstream press. But she feels that this coverage has largely granted a pass to Büchel’s “violent” artwork, failing to give it the serious criticism it deserves. She writes: “I am repelled at how the artist has created a, well, vessel that is capable of neutralizing any and all criticism directed at it, an artwork of the era of fake news.”

You can check out an excerpt from Sharp’s moving piece below, and read the entire text here.

Call me cynical, but I don’t think this project is genuine. This artwork isn’t about the boat, or the people who died in and on it. All I can see is Büchel daring his audience to watch as he strips these dead people of their humanity a second time, and spends €33 million while doing it. It’s a slippery slope to argue that money spent on arts and culture could be used elsewhere, and please don’t mistake this following information for an attempt at making that point. But while the press release says the project “opens up the possibility of actively using Barca Nostra as a vehicle of significant sociopolitical, ethical, and historical importance,” let’s check in with an entity doing this in the present and not creating a monument for a forced past tense. According to a friend of mine who’s a healthcare professional in an institution working with refugees, a budget of this size could fund two clinics — one for pediatric and post- and pre-natal care, including family planning and vaccinations, and one for mental health care for victims of torture and sexual violence, including free medication — for about 10 years.

Barca Nostra is a performance. It’s watching a middle-aged European man metaphorically drape himself in the violent deaths of migrants whom he doesn’t bother to name and then, as a second act, attempt to pin some form of vague guilt on his audience. I hate how Büchel tries to implicate visitors to the biennale in this mess, framing the people strolling past the shipwreck as if they’re as unaffected by what happened in and on this chunk of metal as they appear. He himself stripped the work of any context. There are no signs, no labels; no text anywhere. We’re not given anywhere near enough information to engage or contemplate or act or form an independent thought around this work that doesn’t involve the artist himself. It’s ready-made alright, but all roads lead back to the artist. I don’t think the project proves anything beyond how simplistically Büchel himself — not to mention his curator, who made this project possible — views the world.

Thanks for posting this.

Stock is mostly right. However, when she says the following, I disagree:

The thing is, I don’t see the art world as detached and blasé at all. I think people in this line of work run on emotions and wonder and on intellectual and creative pursuits. There’s often a much bigger picture in the background, a collective dialogue with the past, present and future, jumping across disciplines and schools of thought. These people — many of them whom I know, at least — care about things very deeply. If the art world is becoming increasingly cynical and detached then maybe it’s not a structural issue.

The issue is largely structural despite the people who genuinely wonder, experiment, and press for accountability in the midst of high-artbiz. The structural problem is that socially engaged art locates itself in and through things like biennials, galleries, and museums, where it is rendered privileged and ineffective, aesthetically disconnected, by the institutional framing. To move beyond gesture in socially engaged art, the main work should be a form of community organizing, activism, policy reform, etc. Art institutions may contribute, but only if teleologically linked to the larger issue of communal, political work. And they are mostly not. They are set up not to be. That’s the structural problem.

Once the structure’s set up, it becomes easy prey to charlatans who have a way with advertising and call it art.

Moreover, following Stock, it’s the structural problem that predisposes and then composes the self-conditioning iteratively. Stock is right the self-conditioning accelerates this appalling stupidity and laziness of works like Büchel’s. But this acceleration depends on the structural block of the institution depoliticizing and decommunalizing the work a priori. Remove the framing of high-artbiz, and it can no longer be safe to flaunt privilege over death.