#Wow. What a strange journey! 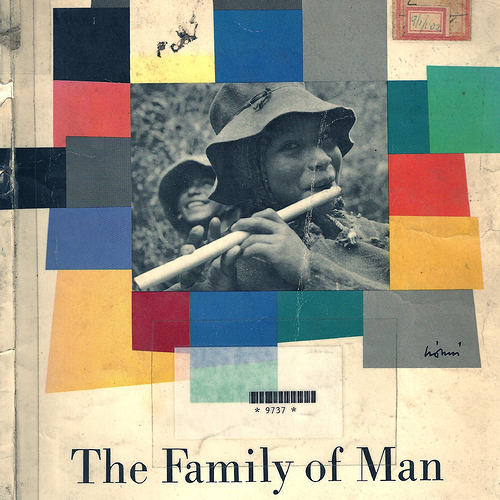 From the catalogue cover for The Family of Man exhibition (1955) at the Museum of Modern Art.

We were invited by the editors of e-flux to be part of their Supercommunity, project for the 56th edition of the Venice Biennale. Together, we came up with the idea of Superconversations, which we thought would be the best way to propagate the ideas and concepts discussed in the Supercommunity texts, by filtering through our community of students, members and affiliates, for the purposes of dissemination, engagement and critical affirmation. In this way, the our work was reconceived such that it immediately doubled e-flux’s original plan in terms of size, strength and diversity.

Our work at The New Centre involved a form of mirroring what e-flux had committed itself to, while expanding its capacities at the same time. We sought out the most interesting writers amongst our community, matching their interests and commitments with those of the thinkers, writers, and artists that had already been chosen to write for e-flux’s Supercommunity issue. We then assisted them in developing their texts, so as to make them publishable five days per week, from May 5, 2015 through the present.

The daily process e-flux and The New Centre performed over this extended period was not entirely dissimilar from the tale of Scheherazade in the One Thousand and one (Arabian) Nights. However, while she had to entertain the King in novel ways every night to save her life, we had to keep the community conversation moving, in the hopes of transforming the minds and attitudes of those who still hold on the idea that art, alongside other forms of knowledge like philosophy, science and politics, could carry a vast potential for transforming the world.

Today, the first phase of our collaborative project is coming to an end, with e-flux’s final editorial and our response, the one you are reading here. Supercommunity and Superconversations project, both were defined as a new form of community that exceeded conventional liberal logics of false togetherness, even while maintaining a paradoxically singular, yet collective dynamism. How then, might we understand these two entities today, at the close of the initial foray?

As the e-flux editors put it in their closing piece:

The supercommunity is… a disastrous new ecology of bad-faith closeness [which] comes with vast new powers that are only starting to become apparent… These new powers convene where teleological visions of progress counter-intuitively reverse, showing that the apocalypse has already taken place in the past, but also that everything in the world is human… Whether you live surrounded by the walking dead or have already arrived in the afterlife, you can travel freely back and forth and still get to work Monday morning, refreshed and ready to fight. Moving across previously stable ontological registers turns their undersides up… Abandon hope: the world machine is ungovernable, and human will is impotent—only friendship is left… When nature disappears, everything becomes a human sign, but mediated by technology… Art can be reconfigured to reconcile human and machine subjectivities. Because all these inhuman extensions only further reinforce the name “human”…

On The New Centre’s end, not only were the primary essays a central focus, but so too was curating responses, as well as mobilizing an ongoing dialogical conversation on social media. Doing so is no simple task, and can only succeed by refusing to working in a coterie fashion, privileging only those with whom one completely agrees aesthetically, philosophically, or politically. Rather, by insisting on a kind of abstraction that does not start from already “Being Singular Plural”, but much to the contrary, through “Becoming Singular Collective”. What we believed and hoped to demonstrate with our work is that collectivities cannot emerge purely from the existing ontological registers, they require an openness to precisely the emergence they bring about.

We look forward to what is to come next, as we continue to plan further collaborations with the e-flux community. To stay up-to-date on The New Centre’s events, seminars, symposia, reading groups, roundtables, and other such projects, please visit our webpage or click “subscribe” on our Facebook Events Page.

Jason Adams is a Professor at Kendall College of Art & Design and an organizer at The New Centre for Research & Practice. He holds a PhD in Political Science from the University of Hawaii and a PhD in Media & Communication from the European Graduate School.

Tony Yanick is a Post-Graduate Researcher at the University of Glasgow and an organizer at The New Centre for Research & Practice. He holds a MS in computer engineering and an interdisciplinary MA in world literature, film, media theory and philosophy.