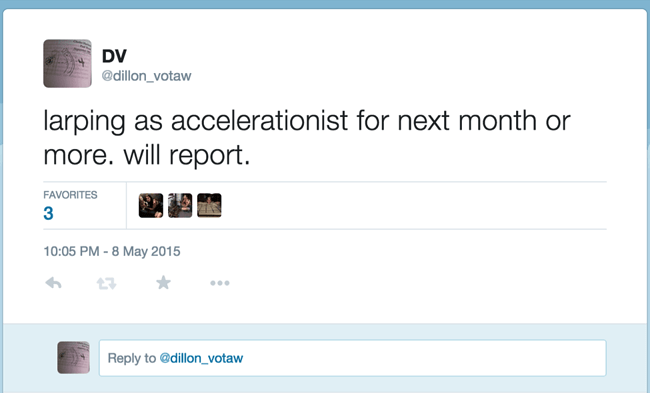 Soon after, she draws attention to her usage of these quote out-of-context, towards the idea that such a contextual lack can make some statements more useful as conceptual metaphors and critical platforms. Before long, however, Falkenhausen provides us with her own orientation towards the quotes, suggesting that we read them as harmonious with her dismissal of accelerationism. (I suspect that these two quotes could be easily turned in the opposite direction.)

Riffing on the first quote, from Judith Butler, Falkenhausen proceeds with identifying the traces of an endemic Narcissism (my capitalization) within a series of cultural artifacts, as well as within “interpretation in the widest sense”. If self-identity is an inadequate visual system, then any optics afforded by Narcissism, “a cultural practice that … motivates and steers technological inventions out to control, sell and dominate,” is to be distrusted.

It is here, then, that Falkenhausen specifies the context within which she reads Butler: she proposes that we take Butler to be warning us of toxic Narcissism (my capitalization) that is embedded both in any theory that claims “universal application to global problems,” and in any thinkers that produce such theories. From this perspective, “accelerationism” is criticized as the return of an outmoded and problematic form of “heroic” narcissism, one that distorts “the critical negativity of theoretical thinking”, which she locates in its pure form as a certain approach to critique that “connects pre-post-structural thought like the Frankfurt School to the post-structuralism of Foucault or Lacan (or … Donna Haraway, Kaja Silverman, Teresa de Lauretis, Judith Butler).” As for the second quote, attributed to de Lauretis, Falkenhausen reads it “as a critique of thinking with global pretensions, which in [her] view abounds in the rhetorics of network apologies as much as in the theory of accelerationism.’

Following such rejections of accelerationism, the copy of Falkenhausen’s text that I have access to proceeds with a series of anticipated denunciatory cries from the pro-xLr8 crowd, listed in the form of questions. I experienced these questions primarily as a series of rhetorical questions, or even challenges, to the presumed-accelerationist reader. As an actually-accelerationist reader, I found myself hungry for more: at least, for answers to this series of questions. What is intended by the presentation of these quotes in sequence, with no response, and as the end of the text’s first section? Are we meant to take the answers as self-evident, the questions as not warranting reply?

Another potential read of this list of unanswered, yet anticipated, questions is that it is a type of satirical performative rehearsing of the Critical Reflexes that are stereotypically or negatively associated with accelerationists. I am lifting this concept of a Critical Reflex from Negarestani, who lifted it from Wolfendale and put it to use towards inhumanism, which is harshly critical of the ready-made, long-cliched theoretical reflexes of ‘Kitsch Marxists’ (who remain, as it were, in his crosshairs (uninflatable). Inhumanism, and the New Rationalist scene from which it emerged, is deeply committed to progressive re-appraisal of social normativity as a primary technology through which both the human and the social are creordered. It is in light of this championing of normativity that Inhumanism accuses Kitsch Marxism of being self-disarmed through a refusal to participate in the construction or manipulation of norms. Negarestani: “Consumption of norms without producing any is the concrete reality of today’s Marxist critical theory. For every claim, there exists a prepackaged set of “critical reflexes.”

What I am seeing in Falkenhausen, then, is a deployment of the same rhetorical weaponry: reducing the opponent’s predictable comebacks to that of mere acquired reflex. One can imagine, now, a Genealogy of (purported) Critical Reflexes, those catchy responses that become memes, which then become evidence of a lack of critical wherewithal.

What is most fatal, however about the Critical Reflexes of Kitsch Marxism, from the Inhumanist perspective, is that they are a set of received discursive norms that reproduce as a core axiom of radical thought the notion that the production of norms is off-limits. Critical Reflexes are only a real problem when they are trapped in theoretical deadlock, when they are unable to change over time into Better Critical Reflexes, which can be collectively produced through the instantiation of new norms in light of the real effects of previous ones. This can be thought of as Normative Patching, or Tuning.

(What does an alpha- or beta- version of a Social Norm look like? How is it launched tested, de-bugged, hacked, etc?)

The New Rationalist gambit, as far as I can tell, seems to be their insistence that the horrors of contingency and subsumption can nonetheless be hedged by rigorous procedures of auto-correcting theoretical navigation and the weaponising of rational normativity. They are asking us to ignore our Kitsch Marxist reflexes and to become brave enough, together, to begin once again experimenting with the raw materials of power and creorder. If the Left does not develop a means of understanding and really manipulating these materials (particularly, in my view, social normativity, financialization, and labor automation), we will continue to stew in our way-too-fucking-convenient inability to achieve any victories in the ongoing battle to reclaim the future.