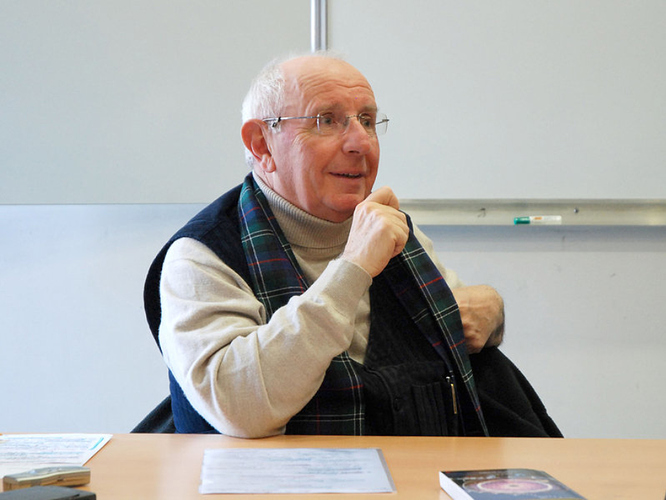 As has been widely reported, influential French philosopher Paul Virilio passed away earlier this week at the age of eight-six. At the Verso blog, philosopher Mark Lacy, who has written extensively about Virilio’s work, remembers the thinker’s key concepts and shows how they remain startlingly relevant. Check out an excerpt below.

I think one of the keys to understanding Virilio is his friendship with the poet George Perec. In books such W or Memory of a Childhood Perec’s work experimented with ways to examine the fascism and anti-semitism that had destroyed his family during the war – there was a playful, experimental but deadly serious project in his writing. Virilio also developed a style of writing that often feels experimental, searching for a new way of understanding of the world, as if the impact of the Second World War generated the need to write differently, to live differently, to build differently, to escape all that had come before …

Reading about Virilio’s life you get the sense of a man who loved Paris, building his life and career there, moving through the worlds of cinema (he was friends with the film director Eric Rohmer), the worlds of literature (Virilio even pops up in a description of everyday life in Paris written by Perec, An Attempt at Exhausting a Place in Paris from 1974), the academic world populated by Deleuze, Foucault and Baudrillard (who appear to always be involved in healthy and not so healthy competition) and the worlds of politics. But while Virilio may have loved Paris, central to his work was the darkside of cities. Modern cities have been the experimental laboratories in new types of policing and control: and his work in the 1970s and 1980s anticipates a world where cities would become increasingly like airports, filled with new technologies to ensure that the urban environment would not descend into disorder, crime and terror. During the 1990s he also anticipated the way in which cities would become the key terrains of conflict and terror in a world where information technologies would create the possibility for new types of global event.

Image of Paul Virilio via egs.edu.

Ah-ha - “French philosophy” - designed by the extremely petty-bourgeois Parisian intelligentisia to be the antidote to Marxist science. Casually contemptuous of consistently taking the proletarian dictatorship side in all raging battles on the class-war frontline against colonialism and monopoly-capitalism, and instead rambling on in pseudo-intellectualism about trivial matters in order to protect Cold War anti-communism and let French imperialism get on with killing and torturing Algerians, Vietnamese, West Africans, Malagasy, etc, etc, etc.
There’s not one piece of “French philosophy” that’s worth a snuffed-out Gitanes fag-end.