Freeportism as Style and Ideology?
May 20, 7:30 pm EST
at e-flux and your home screens 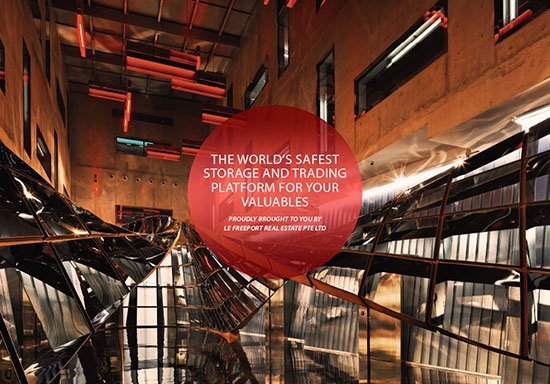 The freeport method of art storage presents its critics with a problem. Is it something new? Or something old? What could be less surprising than an international aristocracy hiding treasures in a cave someplace? Is thinking in terms of freeportism a movement towards emancipation, or away from it?

Following Hito Steyerl, Stefan Heidenreich argues in “Freeportism as Style and Ideology” that the freeport might be a new mode of representation, replacing the one that ruled from the end of the Bretton Woods era up until the Great Recession. Like other such modes, freeportism has a value-form, post-internet art, that is optimized for contemporary accumulation, and an ideology, speculative realism, that attempts to transform its novel configuration of forces and relations into a new metaphysics.

To celebrate the launch of issue 73 of e-flux journal, which includes part two of Heidenreich’s essay, we are convening a panel to discuss the problems and possibilities of freeportism at the conceptual and institutional levels.

The point of departure for tonight’s event is a two-part essay by Berlin-based theorist Stefan Heidenreich, “Freeportism as Ideology and Style: Post-Internet and Speculative Realism.” Part I was published in March, in e-flux journal 71, and Part II appears in the most recent issue.

Freeports, if you’re not familiar, are storage facilities in places with favorable tax laws, like Switzerland, that store goods tax-free while “in transit,” during which they exist in a kind of territorial limbo. Theoretically, this is supposed to be a temporary arrangement, the idea being that the owner will ultimately pay import duties or taxes once the items reach their final destination. In practice, however, there are few, if any, restrictions on how long goods can stay there; so long as they remain on the premises, owners pay no tax, making freeports a particularly appealing place to store valuable luxury objects like fine art. (This New Yorker article from February provides a fascinating glimpse into the notoriously secretive inner workings of the Geneva Freeport.)

Heidenreich’s argument is complex, and worth reading in full, but I’ve attempted a summary below:

As Heidenreich notes, the “free” in freeport takes on a double meaning: not only are these works free of taxes and customs duties, but also of an audience. Following Hito Steyerl’s conception of “duty-free-art,” elaborated in an essay of the same name in e-flux journal 63 (March 2015), Heidenreich sees “freeportism” as a new “mode of representation” for art, arguing, in his essays, that post-internet art and speculative realism serve as its “corresponding style and ideology, respectively.”

In the wake of the 2008 housing crisis and global recession, certain kinds of assets, such as art, became comparatively safe places to park money. However, moving those artworks around introduces risk: things get damaged, shipping is expensive, etcetera. Hence the great appeal of the freeport: artworks can accrue value or change ownership while remaining all the while in tax-free, climate-controlled storage units, drawing them even closer to the status of immaterial financial products. Paradoxically, it is precisely by remaining hidden from view, unable to be appreciated as an aesthetic object, that artworks can maximize their value as assets.

Heidenreich argues that post-internet art has essentially internalized and reproduced the logic of “freeportism”:

The successful freeport artwork requires a strong artistic brand, ample liquidity in the form of tradeable artworks, galleries operating as market makers, and photogenic material objects that produce likable images on platforms such as Instagram and Facebook.”
…
The kind of art known as ‘post-internet’ adapted to these conditions within a relatively short period of time—about five years—mostly by leaving aside its initial focus on web-related practices and processes. This transformation has turned ‘post-internet’ art into a style of freeportism as such, much in the same that, once upon a time, it could have been argued that Dutch still-life painting, with its depiction of worldly goods, was the style of the early financial market that flourished around the Amsterdam stock exchange.

“Freeportism,” for Heidenreich, isn’t just about the artworks that find themselves literally stored at a freeport, but also “work that strives to do so.” (I’m not sure if he means that in a metaphorical sense—e.g., work that is ideologically aligned with the ethos of the freeport—or more literally, in the sense of artworks that are consciously created with the intention that they might accrue enough market value to make them worth storing in one.)

In the second part of the essay, Heidenreich explores the art world’s recent love affair with “Speculative Realism” as a philosophical current. He argues that Speculative Realism serves as the ideal ideological and discursive link between the practices of financial markets and of post-internet artists, via a practice he calls “Philosophical Hedging.” Like hedging in financial markets, a means of minimizing risk by, for instance, buying options or futures in an attempt to stabilize the future value of a market position, “Philosophical Hedging” attempts to use philosophy to stabilize the significance—and thus, I suppose, market value—of artworks. As museums and institutions increasingly focus on contemporary art rather than the construction of a canon into which artists can be inserted and evaluated against, they no longer provide the role as a “stabilizing force” in the art market, as guarantors of an artist’s historical significance. Heidenreich argues that philosophy has taken up that role in their place, offering the stamp of authority, seriousness, and tradition.

Heidenreich suggests that the main concepts associated with Speculative Realist thinkers—like materialism, object-oriented ontology, and “anti-correlationism”—ultimately provide “a justification for an artistic production that goes straight from the artist’s studio to the storage facility, without ever being publicly displayed or shown to anybody.” In his conclusion, he challenges theorists like Suhail Malik, arguing that Speculative Realism does not, as Malik argues, suggest new and alternative trajectories for art outside of its current conditions, but rather provides the perfect ideological cover for “freeportism,” in which artworks are privileged above all as speculative financial assets.

Given that Heidenreich’s essay seems ultimately quite pessimistic about contemporary artists’ relationships to, and complicity in, “freeportism,” I’m particularly interested to hear what our panelists tonight make of this argument, given that all of them are artists, and several of them have been closely linked with the term post-internet.

Things are kicking off here at e-flux HQ. Moderator (and e-flux journal co-editor) Brian Kuan Wood begins by laying out some of the major implications of “freeportism” and its corollaries, among them the fact that artworks remain completely invisible and inaccessible to the public for long stretches of time. After reading the introduction to both parts of Heidenreich’s essay, he’s turning things over to the panelists: from left to right, Kari Altmann, Hayal Pozanti, and Brad Troemel, and Julieta Aranda (via Skype) projected onto the wall.

Kari Altmann begins by giving a brief presentation of some of her projects that have engaged with digital images and their taxonomies. “This is my most reblogged image ever,” she says, about the slide depicted above. It was taken in 2008, right around the time that Google started to arrange images by drawing connections in terms of content.

Kari brings up the question of the artist’s resources, which doesn’t come up much in Heidenreich’s essay, but is arguably one of the most pressing factors affecting the ways in which so-called post-internet works are presented. Curators or gallerists would ask to exhibit her works, which often begin their lives in digital form, but offered little in the way of a production budget, meaning she’s frequently had to confront the question of how these works can be shown not only in terms of aesthetics, but practical economics. 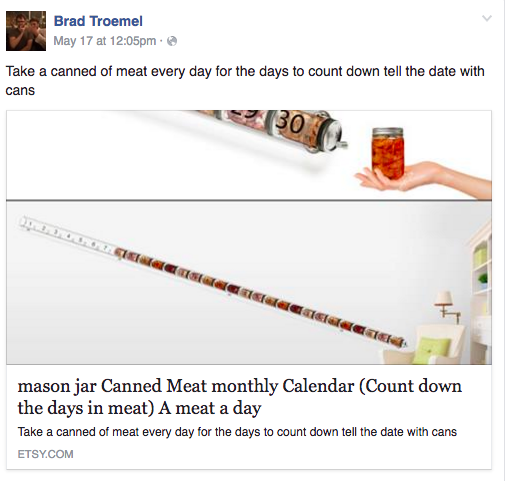 Brad Troemel starts by talking about his Etsy store UV Production House, a collaboration with Joshua Citarella. He describes it as a response to some of the same issues raised by Kari: making art costs money, which emerging artists–especially those without gallery representation–don’t have much of. Basically, he’s saying that there’s a lot of financial risk built into the process for artists as well; perhaps more so for artists than for collectors, since they’re in a considerably more precarious position financially. He’s got a point: a collector might spend hundreds of thousands of dollars speculating on works by emerging artists that may not hold their value, but spending $100 to fabricate a work that may not sell for months, if ever, is a pretty extreme financial proposition if you only have $200 in your checking account. With UV Production Store, the overhead for the artists is low or nonexistent: they don’t need a studio, they don’t need to buy raw materials, etc. When someone buys a product from the store, it arrives to them in the form of various Amazon Prime packages (ordered by the artists only after they’ve sold something on their site) and some kind of tutorial for assembly. Of course, the products they advertise are intentionally absurd, so I wonder how many orders they’re actually receiving. As it so happens, the store was taken down earlier today by Etsy for violating their Terms of Service–one of the perils of engaging with these kinds of corporate platforms.

Kari brings up the fact that a lot of her works, as well as those by other artists often considered under the post internet banner, never wind up taking physical form. Heidenreich’s essay suggests that post-internet art has followed a trajectory from primarily web-based works to web-related works that are primarily made for a gallery (or collector), but for artists like Altmann, it’s more often a mix of the two.

Hayal raises an important point, that even works that never leave the internet, or wind up in the Geneva Freeport, are still being stored somewhere: on data servers, which have a displaced (and hidden) material existence of their own. She’s also the lone painter on this panel, and thus has a unique–in this context anyway–perspective on the question of display and circulation. Brian asks her about what kind of control she has over her works once they’re purchased by a collector: does she know where they go? How does she keep track of them? What happens if the initial buyer re-sells that painting to someone else?

Q&A time: The question of historicization comes up more than once, and Brian suggests it might actually be one of the most important underlying currents here. With more or less ephemeral works, having some form of documentation or record becomes even more significant.

For our final question we have…a question that is perhaps actually a comment. Is e-flux a kind of freeport? Discuss!

And with that, we’re done. Thanks for following along!