As we reported last week, Ai Weiwei has been stationed on the Greek island of Lesbos photographing the waves of refugees arriving from Syria and posting his reportage on Instagram. At first, Ai’s images seemed documentary in nature–it seemed like the artist was simply using his wide-reaching social media platform to raise consciousness about the refugee crisis. The artist himself only infrequently showed up in these images, and when he did, it was to announce he made a new friend in a crisis volunteer.

And then yesterday, Washington Post broke the story that Ai posed for a photo op as Alan Kurdi, a Syrian refugee toddler who died in the Mediterranean and whose corpse was photographed after washing ashore near Bodrum, Turkey. (Rather than acknowledging the inherent gross opportunism in this photo, the Post refers to the photo as a “huge artistic tribute.”) The Chinese artist was being interviewed by India Today while the photo was taken, and apparently wanted use the photo op to show solidarity with the dead Kurdish refugee toddler. The photo is now being shown at the Indian Art Fair. The Washington Post reports:

That photograph of Ai captured by India Today magazine on the Greek island of Lesbos is now the toast of the India Art Fair at an exhibition called “The Artists” this weekend. The exhibition was mounted by news magazine here.

Ai and his team “actively helped in staging this photograph for us,” said Rohit Chawla, a photographer at India Today, who traveled to Lesbos, where Ai is currently working on an art project on refugees.

“I am sure it wasn’t very comfortable to lie down on the pebbles like that. But the soft evening light fell on his face when he lay down,” Chawla recalled.

Can you imagine the discomfort Ai Weiwei must have experienced while acting like a refugee?

We know that art and activism make strange bedfellows, but Ai’s brand of activism is uniquely commercial, and thus uniquely spurious–Ai is gaining both cultural capital and money from the refugee crisis. Rather than placing his work in the public square (why isn’t Instagram enough?), Ai turns time and again to the gallery, department store, or art fair. Further, while Ai’s work is a misguided act of solidarity, the artist fails to consider that by posing as Alan Kurdi, he effectively suggests that the image of a dead three-year-old isn’t sufficiently shocking to us, that we need instead an image of a middle-aged, wealthy and powerful man to confer the real tragedy of the refugees’ plight.

If we were to ascribe a set of ethics to art engaging activism, I would suggest number one: Do not accept capital gain from restaging images of dead refugee toddlers.

Full disclosure: I worked for Ai Weiwei at his Beijing studio in 2010 organizing his photography retrospective, “Interlacing”.

I feel that the photograph of Weiwei posing as Alan Kurdi seems to be taken out of context when placed in an art fair…it seems that the photo was taken as part of his interview for India Today. I would assume then that the photograph was meant to accompany the interview which may give the image more context? But I don’t know since I haven’t read the interview in India Today, and apparently it is not available yet: http://indiatoday.intoday.in/story/artist-ai-weiwei-poses-as-aylan-kurdi-for-india-today-magazine/1/584804.html

It is true that Ai is gaining cultural capital from his activism, but I do not know if he is gaining actual money directly from his involvement with the refugee crisis. Yes, if one extrapolates the fact that as he gains greater cultural capital then the value of his art increases, but as someone who wears two hats simultaneously (artist and activist) I don’t know if this is something that can be avoided. I’m also not sure why an artist would turn away from galleries, department stores, or art fairs, or anywhere that artwork can be shown to those seeking art expressly (galleries/art fairs) or in places where art is unexpected (department stores). To me the point of activist art is to activate people to do something about an issue so the more people that see your art/message the better.

Maybe there is a lingering commentary in there about how the original image was allegedly posed; and even if it weren’t, how its unanimous use in the Western press was indicative of another type of cathartic opportunism that has no reflection on conscience or policy.

We don’t need photographs like this to tell us what to think about the refugee crisis. This is a really insensitive act. I wonder how the father of the dead child (or the relatives of any refugees who were drowned) might feel when they see this photo - has Ai Weiwei thought about this or did he only think about his audence in the ‘art world’? 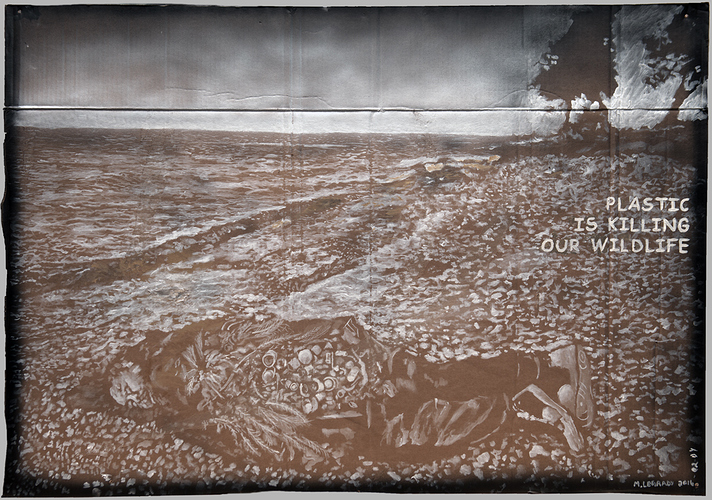